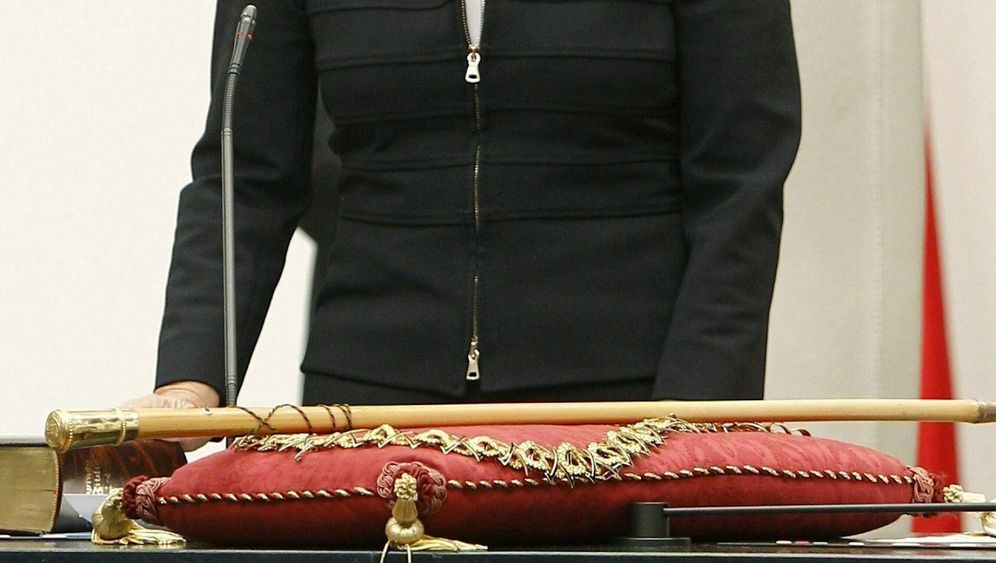 Photo Gallery: Madrid's Battle against a Mountain of Debt

When Ana Botella looks up from the files in her office on the fifth floor of Madrid's city hall, she sees the crown of a fertility goddess. The marble statue of Cibeles standing in a chariot being pulled by lions is the centerpiece of a busy plaza in the Spanish capital. On good days, the players and fans of Real Madrid, the city's league-leading soccer club, celebrate their victories in the square in front of the Cibeles Fountain.

Last Thursday wasn't one of those days. Instead of jubilant soccer fans, there were tens of thousands of protestors waving red flags in front of the fountain just below the balcony of Botella's office. They were protesting against the fact that over 5 million of their fellow citizens are unemployed and against the austerity measures imposed by the conservative federal government, which are plunging many families into poverty.

That morning, inside city hall, Botella and the city council had decided to free up about €1 million ($1.3 million) in funds so that rents could be reduced for the city's poorest residents living in subsidized housing.

Indeed, these are hard times on Cibeles Square. Madrid's mayor still has to pay over €1 billion for 16,712 outstanding bills from 2011 as well as try to get the finances of Spain's most heavily indebted city under control. And she needs to do so as quickly as possible.

Ana Botella, 58, the wife of former conservative Prime Minister José María Aznar, has been Madrid's mayor since the end of December. Before that, she had served eight years as a city councilor, initially for family and social affairs and, most recently, for transportation and the environment. Rather than being elected to the office, Botella inherited it from her predecessor after he was brought into the administration of Mariano Rajoy, a fellow party member who became Spain's prime minister in November.

Botella inherited not only the office with the best view, a room larger than the Oval Office in Washington, in a 1917 palace that was converted into the city hall at a cost of €500 million, but also the services of a butler whose sole duty is to serve coffee to her and her guests. But she has also inherited close to €6.4 billion in debts.

By the end of March, Botella had to present the Finance Ministry with an austerity plan demonstrating that the city's future expenditures would no longer exceed its revenues. She had to draft this plan because the government of conservative Prime Minister Mariano Rajoy enacted a law last week that will impose sanctions on public administrations that continue to incur new debts.

In this sense, the mayor's position is not unlike that of the prime minister. For the 2012 budget, which he approved in the Council of Ministers last Friday, he will have to make over €27 billion in cuts and collect more than €12 billion in additional taxes.

Rajoy's socialist predecessor as prime minister, José Luis Rodríguez Zapatero, also left behind a dubious legacy: a deficit of 8.5 percent of GDP, which is much higher than what had been agreed to with Brussels. The current administration is now expected to reduce the deficit to 3 percent of GDP by the end of 2013 -- a promise that Spain must keep at all costs if it hopes to regain the confidence of its European partners and the financial markets.

Unlike the prime minister, Botella cannot blame a political rival on the left for the city's past wasteful habits. Instead, it was her predecessor, a conservative, who had increased Madrid's debt by a factor of five. He had a ring of expressways built around the city and pursued Madrid's candidacy as a host city for the Olympics twice. In the process, he spent many millions on stadiums that are now underused. The new mayor wants to continue the city's bid for the 2020 Summer Olympics, arguing that most of the infrastructure has already been built, -- and that it's also important for a society to have its dreams. But, as far as everything else is concerned, she champions a tough new austerity course.

Botella, a lawyer and devout Catholic, isn't the worst choice to manage the city in its current plight. "I married at 23 and supported my family during the first few years," Botella say proudly. She worked as a civil servant in the administration, most recently in the Finance Ministry. She only stopped working when her husband, whom she brought into the conservative People's Alliance party in the late 1970s, became prime minister in 1996 and the family of five moved into the Moncloa Palace, the prime minister's official residence. She keeps a photo from the night of the election on the bookshelf next to her desk.

As the wife of the prime minister, she was derided for wearing leather jackets from a cheap retail store on official trips. She also raised eyebrows once when she appeared in jeans and a plain jacket instead of an evening gown at a reception for the royal couple.

Today, she also embodies a new style. Her predecessor in Madrid's city hall was fond of luxury and fancied himself an excellent, well-read speaker. Botella, on the other hand, wears off-the-rack dresses and hardly any real jewelry. What's more, she stiffly adheres to her prepared speeches -- partly out of a fear of repeating the kinds of gaffes she has previously made in remarks about homosexuals or people on the left.

But the thing most demanded of politicians these days is strict bookkeeping. Four years ago, when the real estate bubble burst, one of the main sources of revenues for Spain's municipal administrations dried up. Cities could no longer collect nearly as many fees for issuing building permits, and they also lacked the trade tax revenues from construction contractors.

What's more, many companies in the construction sector were forced to declare bankruptcy. While companies are required to pay value-added tax upfront to the tax authorities, the customers -- and especially those in the public sector -- were unable to make their payments to the companies during the crisis.

Now the Rajoy government has promised assistance. Heavily indebted cities can now borrow money for 10 years, at an interest rate of only 5 percent, from a €35 billion fund managed by the National Credit Institute. The city of Madrid will avail itself of the offer beginning in May so that it can finally pay close to 1,700 suppliers and craftsmen. Nevertheless, the mayor still realizes she has to trim her future spending and seek out additional sources of revenue.

To do so, Botella plans to start selling city assets, including buildings and commercial interests, to local businesses, such as the water utility. She has also made €130 million in cuts, reduced the size of the city's motor pool, dismissed advisers, put the redesign of Madrid's art district on hold and slashed subsidies for programs helping drug addicts and first-time employees.

In addition to municipalities, Rajoy must also restructure the country's 17 "autonomous communities," which are regions comparable with Germany's federal states. Primarily responsibility for the fact that government spending has spun out of control lies with these regions. The new government and the overwhelmingly conservative governors of these regions have agreed to impose debt ceilings. But since it will probably be impossible to stay below these levels without additional cuts in spending on education, health care and social benefits, many state-owned companies will be privatized or dissolved.

On the weekend before last, voters gave Prime Minister Rajoy his first warning. The leftists won an election in the southern region of Andalusia, where unemployment stands at 31 percent, or 8 percent above the national average. They had promised to guarantee the blessings of the welfare state instead of focusing exclusively on austerity measures.

Rajoy's tactic of keeping his budget plan a secret in the run-up to the regional elections failed. With his bid to avoid upsetting voters, he had risked triggering a lot of resentment at the European Commission in Brussels. His Italian counterpart, Mario Monti, even voiced his "concern" over Spain's reliability, and the risk premium for Spanish government bonds went up.

Shortly after coming into office, Rajoy used his absolute majority in parliament to implement a tightening of the labor-market reforms launched by his predecessor, Zapatero. It now enables troubled companies to cut wages and lay off employees without having to pay substantial severance packages. The conservatives believe that the new law will lead to the signing of more employment contracts in the long term. Despite the general strike, Rajoy intends to stand his ground.

The government wants the savings banks, whose books are burdened by mortgages at risk of default as well as by devalued real estate, to quickly coalesce into larger institutions. For the coming months, Rajoy has also announced additional and "equally important" reforms in government services for the public administration and in the energy sector. The budget approved by his cabinet will force all ministries to cut spending by at least 17 percent and freeze all civil-servant salaries.

Still, this is all far from enough. The Euro Group, made up of the finance ministers of the 17 euro-zone member states, is demanding that Spain reduce its deficit to 5.3 percent of GDP by the end of the year, and it plans to monitor the country's progress. This has prompted Rajoy to go against his campaign promises by raising some taxes after all. The increase in income tax rates, limited to two years for now, has been in effect since January, and the tax burden for large companies will also be increased.

Union leaders and opposition parties on the left have been arguing that the brutal austerity course is only expanding the army of the unemployed, will curtail consumption and will deepen the recession. Nevertheless, Rajoy remains confident. "The worst mistake is to do nothing," he said

As Rajoy makes these changes, no elections will stand in his way for at least 12 months. Mayor Botella has even more time. Madrid residents will not be voting for a new mayor until 2015. Then the woman who inherited her office might finally be elected.

5 Bilder Photo Gallery: Madrid's Battle against a Mountain of Debt 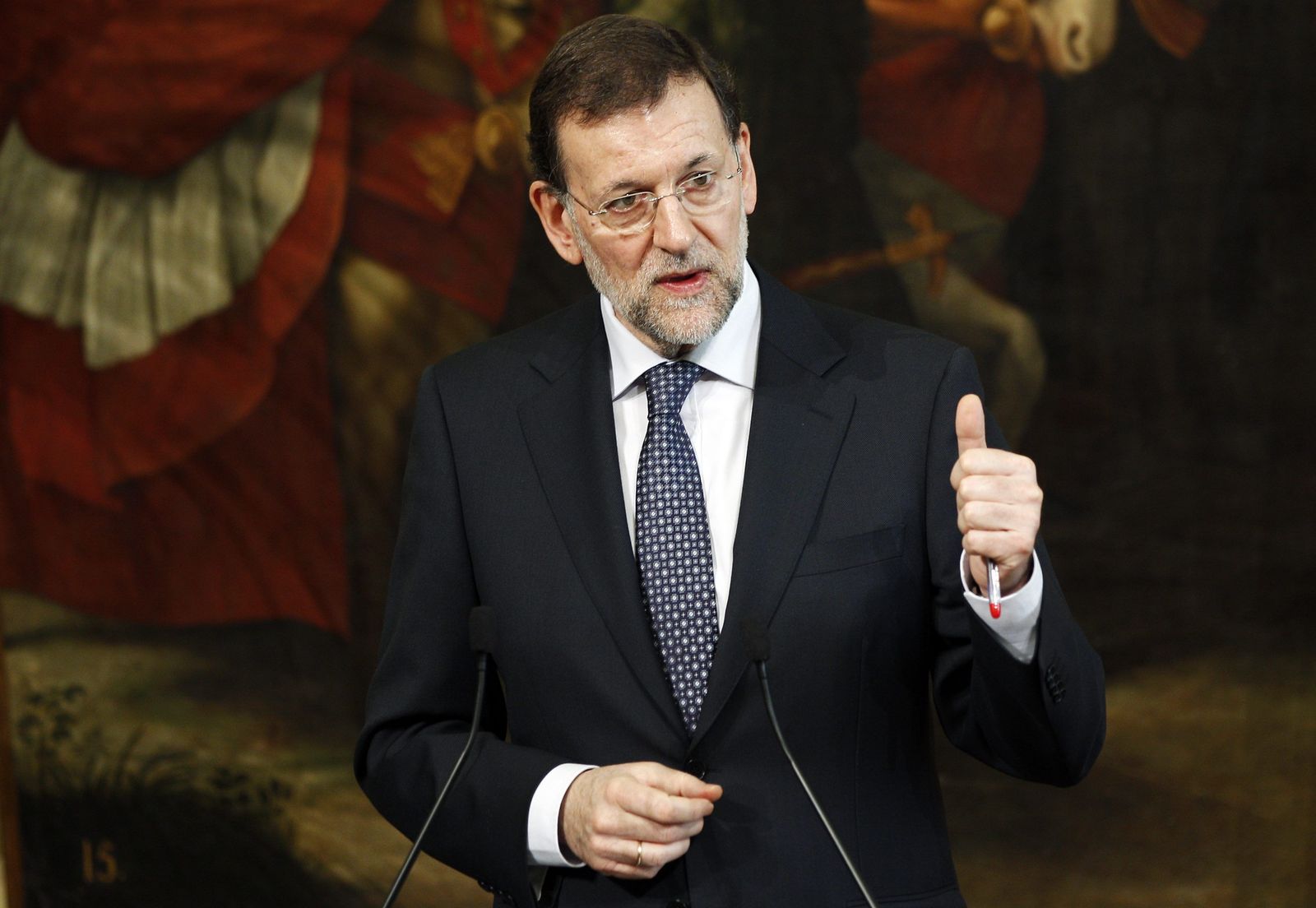 Recently elected conservative Prime Minister Mariano Rajoy is trying to make similar cuts at the national level. For the 2012 budget, which he approved in the Council of Ministers last Friday, he will have to make over 27 billion euros in cuts and collect more than 12 billion euros in additional taxes.