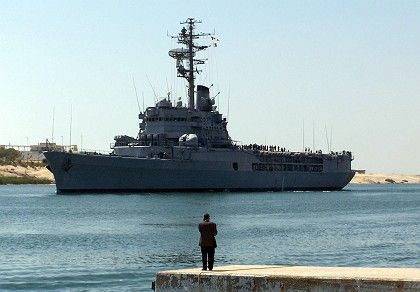 Last week's meeting between the two leaders in the Bavarian town of Straubing was no exception, SPIEGEL has learned. This time, Sarkozy, who has had no shortage of big ideas since taking office in May 2007, told the Germans about his plans to propose the creation of a European naval unit during France's presidency of the Council of the European Union, which begins on July 1.

Under Sarkozy's plan, the German Navy is supposed to contribute frigates and logistics units to an aircraft carrier battle group which will sail under a European flag. The aircraft carrier itself will, according to the plan, be supplied by the United Kingdom, however, as France's prestige aircraft carrier, the Charles de Gaulle, is frequently out of service for repairs. Sarkozy will decide about the construction of a second aircraft carrier only in 2012 or so, as there is currently not enough money available for the French armed forces.

For this reason, as Sarkozy explained behind closed doors in Straubing, he also wants to postpone the construction of new nuclear submarines, reduce the French Army by 35,000 troops to a total of around 220,000 and reduce the commitments of the French military in Africa. In addition, the president intends to transfer responsibility for the gendarmerie to the Interior Ministry. The paramilitary force, with its around 100,000 personnel, has until now been under the control of the Defense Ministry.