The first skeletons were unearthed by construction workers last October. A pit dug for the foundation of a new hotel in the Polish city of Malbork revealed the remains of dozens of corpses, all heaped together in what was apparently a World War II-era mass grave. But plenty of questions remained, and investigators began taking a closer look. 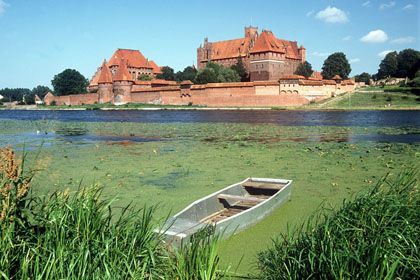 The remains were found not far from the famous Malbork Castle.

This week, Piotr Szwedowski, a Malbork city official, revealed what they found. "Since then, we have exhumed around 1,800 corpses," he told the news agency AFP. "We are pretty sure that they were former residents of Malbork."

City officials are also pretty sure that they were victims of a massacre. Szwedowski said that one in 10 of the corpses had been shot in the head. All of them, furthermore, had been buried naked, "without shoes, without clothes, without personal items," he said. "The metal detectors used during the excavations found no metal, not even a false tooth."

Malbork is located in a region that only became part of Poland after World War II. Prior to that, the city was German and was called Marienburg. City officials presume that the remains are of former German citizens of the town, killed during the Russian advance in 1945. Szwedowski told AFP that some of the victims may have died in the cold winter weather that year or were killed by artillery. They were buried in a bomb crater.

Because some of the victims appear to have been murdered, Polish officials have launched an investigation, according to German tabloid Bild.

Malbork is home to Malbork Castle, one of Poland's most famous tourist attractions. The castle was founded in the 13th century by Teutonic Knights and is the world's largest fortress made of bricks. For most of its history, the town was part of German East Prussia, but became part of Poland when that country's borders were shifted westwards following the war. The Germans then living in the areas that became Poland were forced to leave.

In 1945, Malbork was the site of heavy fighting between the retreating Germans and the advancing Russians. Since the end of the war, 1,840 former residents of Marienburg were classified as missing.