Three tables separated Anders Behring Breivik and psychiatrists Torgeir Husby and Synne Sørheim. The killer's left arm was constrained by a belt around his stomach, and his feet were fettered. Two prison guards watched over him as he sat for 13 sessions with the psychiatrists.

The two ultimately diagnosed Breivik with paranoid schizophrenic psychosis. Their finding could eventually mean that he will be held in a forensic psychology clinic rather than in prison.

But since they presented their expert opinion to the court in Oslo, there has been growing criticism of its findings. People question whether it is plausible that a man who murdered 77 people can be mentally ill and therefore not responsible for his actions in the eyes of the law.

In fact, Randi Rosenqvist, the most influential forensic psychiatrist in Norway, also has doubts. "As far as I'm concerned," she says, "this diagnosis doesn't follow from their arguments."

For many years, the 60-year-old psychiatrist headed the forensic medicine commission that evaluates the quality of forensic expert opinions. Accordingly, her judgment carries weight in the field.

More than anything, Rosenqvist faults the psychiatrists for having brushed aside Breivik's anti-Muslim ideology by arguing that it stems from mental incompetence. For historical reasons, she explains, there is a tradition of caution when it comes to diagnosing mental illness in cases involving politically motivated perpetrators.

To back up her point, she mentions the Baader-Meinhof gang, otherwise know as the Red Army Faction, which carried out a series of deadly bombings and assassinations in Germany between the 1970s and 1990s. With them, she says, "nobody would have even thought of declaring the terrorists incapable of guilt." As a counter example, she also mentions the widespread abuse of psychiatric diagnoses for dissidents in the Soviet Union.

SPIEGEL has obtained significant portions of the transcripts from psychiatrists' sessions with Breivik. In them, there are some things that support the conclusion that his deeds were those of an insane person. For example, at one point, Breivik says that "the first target was indescribable." He then laughs and continues: "But I quickly became immune to it. As they swam, I was virtually on autopilot, and I wanted to execute as many (of them) as possible." At another point, the experts asked him what was going through his head while he was running around shooting people. In response, he said: "I wanted to kill enough (of them) so that the publication of my manifesto would attract enough attention in the global media. The operation was merely a formality."

But these kinds of statements don't necessarily lead psychiatrists to deduce that Breivik is evil or ill. To make an unambiguous diagnosis of paranoid schizophrenic psychosis, the experts would have had to recognize symptoms such as acoustic hallucinations ("hearing voices"), which didn't happen in Breivik's case. Or they would have had to note bizarre psychic delusions.

In fact, the psychiatric evaluators did just that, but they attributed Breivik's belief that he is a member of the Knights Templar to his anxiety about being monitored by the police. But none of that convinces Rosenqvist. "When someone plans this kind of attack, it would be strange if he didn't feel like he was being followed," she says.

What's more, Rosenqvist points to a possible contradiction. Based on low values on a diagnostic scale, the evaluators certified that Breivik functioned poorly in everyday life. But, counters Rosenqvist, "he must have had good cognitive abilities for the planning" of his deeds.

Rosenqvist also thinks that the details about Breivik's life on which the evaluators based their diagnosis aren't very convincing. For example, they note that Breivik lived with his mother and let her do his laundry and cook for him, and that he no longer had much social contact after 2006. But, in Rosenqvist's opinion, "Those aren't such unusual living conditions for young men."

Clinical psychologist Svenn Torgensen also suspects that Breivik is actually suffering from a narcissistic personality disorder. To this he attributes Breivik's delusions of grandeur and his belief that he was singled out to be a knight in a crusade against Islam.

Even the two psychiatric experts who wrote the official report gathered a series of signs that tend to speak for pathological narcissism. For example, when they asked Breivik what he thought the youths probably felt when he was shooting at them, the killer merely responded by discussing what the deeds meant for him. "On this day," he said, "I was waging a one-man war against all the regimes of Western Europe. I felt traumatized every second that blood and brains were spurting out. War is hell."

Torgensen gets the impression that Breivik found an ideal place to nourish his delusions of grandeur in the anti-Islamic scene full of crusader fantasies. "This was coupled with an extremely sadistic disorder," Torgensen says. "This disastrous combination could explain the scale of his violence."

What's more, Torgensen believes that officials are trying to use a diagnosis of mental disease to make Breivik disappear as quietly as possible. One thing that leads him to believe this are rumors that a new wing is being built in the prison that will be dedicated to psychiatric detainees. 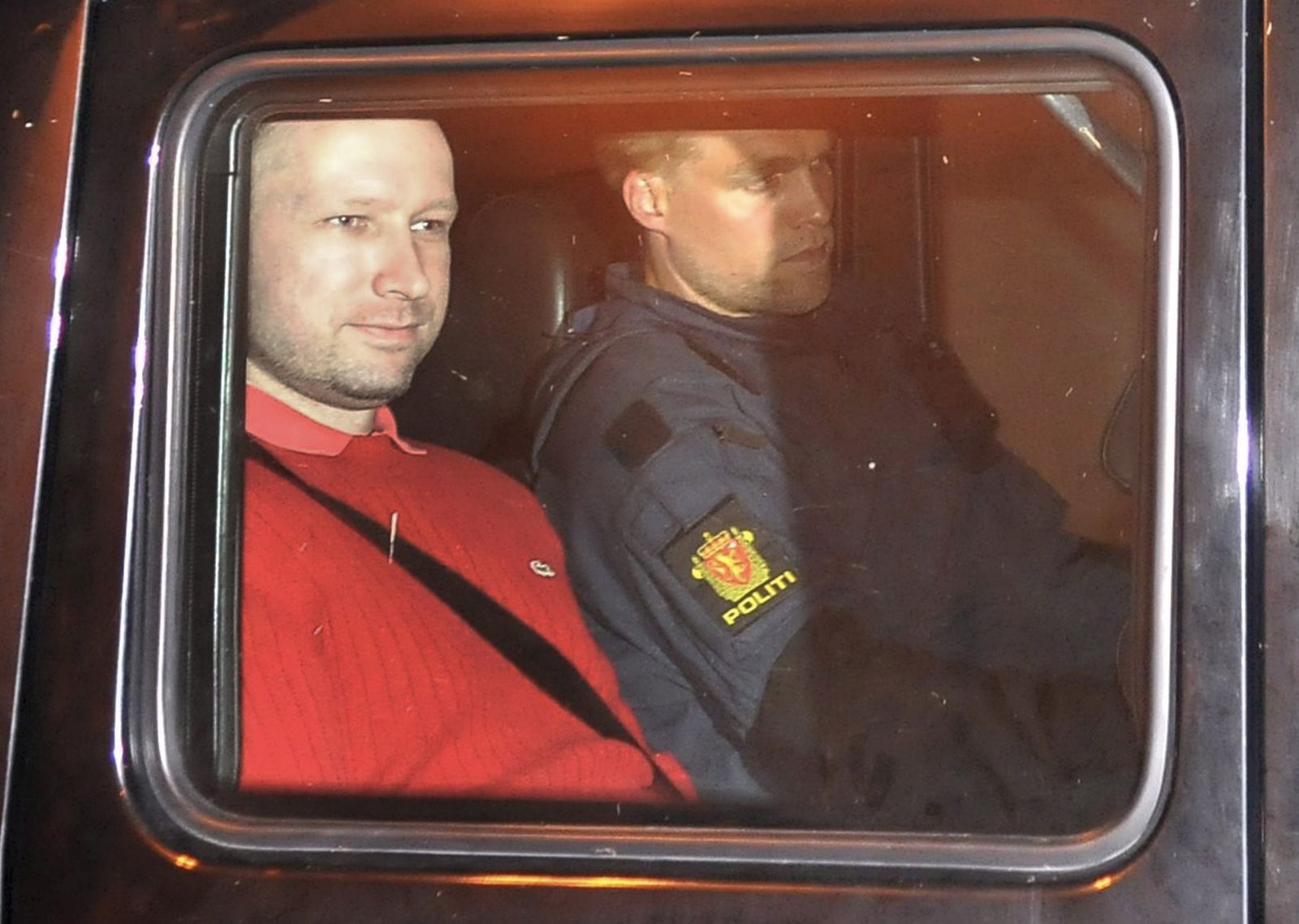 Anders Behring Breivik leaving a courthouse in Oslo just days after the massacre.