European Central Bank President Mario Draghi is spending a lot of time on the road these days, not unlike a traveling salesman. The product he has on offer is credibility, but in Germany at least, it is proving difficult to find eager takers.

Last week, for example, Draghi gave a speech to several hundred business leaders at the Berlin Congress Center -- and the mood was reserved. German business owners still have fond memories of the old deutsche mark, and Germany's central bank, the Bundesbank, still has a good reputation. Draghi's recently announced plans to launch unlimited purchases of sovereign bonds from crisis-stricken euro-zone member states, on the other hand, are being met with disconcertment and concern.

"These new steps are not a departure from our mandate," Draghi told German industrial leaders. The ECB, in other words, isn't just focused on price stability, but is also engaged in "ensuring the proper transmission of monetary policy." Beyond that, though, concerns are unfounded. The moves made by the ECB, Draghi insisted, "do not aim to finance governments, and nor would they if they were activated."

Draghi, of course, was not as concerned about those gathered in the room before him as he was about a man sitting 425 kilometers (266 miles) away in Frankfurt: Bundesbank President Jens Weidmann. Weidmann believes that, with its bond purchases, the ECB will help euro-zone governments gain access to funds at attractive rates by pushing down interest rates on those bonds. But that, in Weidmann's view, is fiscal policy rather than monetary policy and is thus outside the ECB mandate.

A Difficult Question to Answer

The duel between Draghi and Weidmann is not new, but it has become more pointed of late. And its importance would be difficult to overstate: It has to do with the future course of the ECB and, with it, one of the world's most important currencies. Does the ECB's bond-buying program fall into the category of monetary policy consistent with the bank's mandate of maintaining price stability? Or does it step over the line into fiscal policy by intervening in countries' efforts to obtain capital, which it is expressly forbidden from doing?

It's a difficult question to answer. There is, after all, no clearly defined boundary where monetary policy ends and fiscal policy begins.

The ECB is prohibited from directly purchasing bonds from governments, and yet purchases on the bond markets are among the instruments at its disposal. It is permitted to make such purchases, but only for reasons of monetary policy, such preventing deflation, for example.

Bond purchases are a treatment with side effects. Falling interest rates on sovereign bonds reduce the cost of government borrowing. The question is whether these side effects are the real motivation behind the ECB decisions, while the arguments surrounding monetary policy are merely a pretext. In that case, the purchases would be little more than government financing in disguise.

Germany's Federal Constitutional Court could very well be of the same opinion. In its recent ruling on the European Stability Mechanism (ESM), the court did not fail to express its skepticism of the bond purchases. The court will address the legality of the bond purchases in upcoming proceedings.

Even then, however, the German court will likely refer the case onwards to the European Court of Justice, which will then be forced to decide whether the central bank is still acting within the bounds of its mandate. Both the ECB and the Bundesbank are already preparing for the legal battle and are reviewing the legal underpinnings of their respective positions.

The Weakness of His Argument

Draghi and the majority of the ECB Governing Council argue that high interest rates on government bonds also make borrowing more costly for businesses, consumers and homebuyers, despite the central bank's current low interest-rate policy. By buying government bonds on secondary markets, the ECB hopes to push down rates on the credit markets.

During his speech in Berlin, Draghi insisted that the ECB must ensure that interest rates do not continue to drift apart within the euro zone. He noted that it is unacceptable for businesses and consumers to have to pay varying levels of interest on their loans within the same monetary zone, depending on the country. A company in Germany, he said, pays 3 percent for a five-year loan, while its Italian competitor pays 5.5 percent. A German home builder can borrow money at 3 percent interest, while a Spaniard pays 7.5 percent.

"In these circumstances, monetary policy cannot work properly," Draghi told his audience. "The ECB's Governing Council therefore faced a choice: to accept this situation and allow the singleness of its monetary policy to be undermined; or to take actions within its mandate to restore the normal transmission of monetary policy across all parts of the euro area. We decided in favor of the latter."

But it is precisely such examples that reveal the weaknesses of his argument. Draghi claims that the monetary cycle is disrupted and the credit supply to the economy is jeopardized if there is a 4.5 percent difference between interest rates for comparable real estate loans in different countries. Yet if that were the true cause of his concern, he would have had sufficient reason to intervene in January of this year.

At that time, there was a 6 percent spread between interest rates for German and Spanish housing loans. But that was precisely when the ECB, under the leadership of its new president, Draghi, allowed the first bond-purchasing program to expire. In the ensuing months, the ECB also saw no reason to step in, even though the spread between German and Spanish housing loans was higher than in July, when Draghi perceived the difference as alarming.

Draghi also deftly chose his example for business loans. It applies to loans with terms of five or more years. The situation is more favorable for other commercial loans.

This becomes apparent when additional business loans are taken into account. The comparison shows that there have frequently been substantial spreads in interest rates in the history of the euro. This occurred most frequently at the beginning of the monetary union. But it has been a repeating phenomenon even in more recent years.

The average deviation from the mean interest rate serves as a benchmark for comparisons. Statisticians refer to this value as the standard deviation. This value is currently at about one for all commercial loans within the euro zone. It was higher at the beginning of 2005, that is, the deviation was larger. In September 2009, there was a 2.6 percent spread between Finnish and Portuguese interest rates for commercial loans, similar to the difference between German and Italian rates today, and yet the ECB did not feel compelled to intervene in the market.

Similar comparisons can be made for other types of loans. Mortgage rates in relatively healthy countries like Germany, France and the Netherlands, on the one hand, and crisis-ridden countries like Greece, Spain and Italy, on the other, are currently closer together than they were in 2004.

The standard deviation for these loans is currently about 0.9, as compared with 1.1 in February 2005. A similar development can be seen in consumer loans.

Draghi and his experts at ECB headquarters in Frankfurt are aware that history would seem to make their current alarmism appear questionable. Yet their only admission of that fact can be found in a brief aside buried within an expert opinion in the ECB's August monthly report. The 22-page opinion explains the alleged imbalance in the interest rate mechanism. The spread in interest rates has grown since 2010, they note, however "it is still significantly lower than the level observed before the crisis, especially in the period 2004-06." The ECB does not explain why it did not intervene then.

This suggests that Draghi's objective is in fact not to achieve low interest rates for businesses, consumers and home builders, but that he has a different clientele in mind: the governments in Madrid and Rome.

It is also difficult to use concern over interest rates for businesses and homebuyers as justification that the ECB only buys government bonds when the country in question submits to an ESM restructuring program. Do political decisions suddenly make the need for monetary policy intervention more acute? Hardly.

"The ECB's argument that the bond purchases have to do with monetary policy is a pretext," says Jürgen Stark, the central bank's chief economist until the end of last year. "If the transmission mechanism of monetary policy is indeed disturbed, the ECB must intervene, irrespective of whether or not a country has subjected itself to a bailout program."

For Stark, who resigned in protest over the ECB's first bond-purchasing program, a red line has been crossed once again. "We are talking about the financing of governments here," he says. That, he points out, is in violation of European Union treaties. "The ECB is operating outside its mandate," he concludes

Academics share his assessment. "Common sense tells us that the ECB, with its purchasing program, is doing something completely different from expressing its concern over price stability," says Clemens Fuest, a professor of economics at the University of Oxford. According to Fuest, the ECB, following the example of the International Monetary Fund, is upgrading itself to a European bailout institution, which provides assistance based on certain conditions. It loses its independence as a result, says Fuest, because it can hardly refuse to provide assistance if its conditions are met. "The ECB has overstretched its mandate," Fuest believes.

Even supporters of the bond-purchasing program are critical of Draghi's approach. "The ECB should have continued to cite market failure as justification for its purchases," says Peter Bofinger, a monetary expert at the University of Würzburg in southern Germany and a member of the German Council of Economic Experts which advises the government on economic issues. "Then it could have intervened whenever it felt it was appropriate."

Instead, says Bofinger, the central bank is making itself dependent on the decisions of politicians and on the bailout fund. "In doing so," Bofinger explains, "the ECB is increasingly getting into dangerous territory." 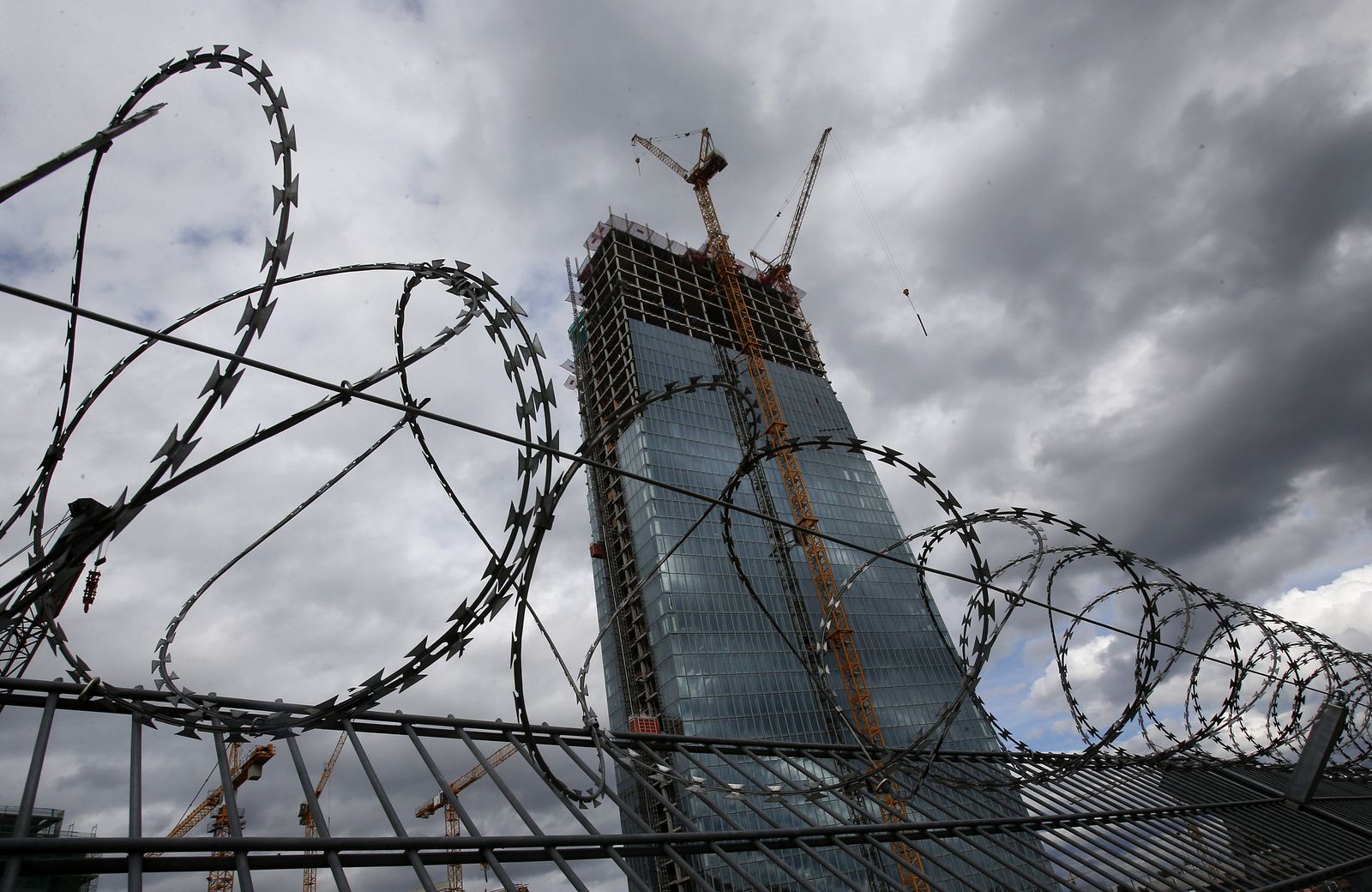