Should we admire her? From the beginning of her term in office in 1979 to her less than glamorous departure in 1990, our verdict on her shifted back and forth between deep respect and damnation. On the one hand, she had the determination and strength to defend the United Kingdom and prevent it from sliding into economic oblivion. On the other, she pursued a ruthless form of capitalism that, in Germany, with our social market system, we had long regarded as a thing of the past. With her anti-European policies, she also appeared to be more a product of the first half of the 20th century than the outgoing half in which she governed.

I met Margaret Thatcher only once. In 1993, SPIEGEL obtained the right to print an advance excerpt from her memoirs, and the expensive contract also included the right to an interview with the author. It was one of the most difficult and challenging SPIEGEL interviews I ever conducted. There was only a short greeting and none of the small talk that usually accompanies interviews. We asked critical questions, but they were in no way aggressive. But it appeared to me that Lady Thatcher sensed some kind of hostility behind our questions and she correspondingly gave tough and at times outright hostile answers. Her goodbye was as curt as her greeting.

A Country in a Disastrous State

We had encountered a woman who made history, even if the massive scope of her influence wasn't entirely clear at the time. Thatcher took the helm of her country at a time when it was in a disastrous state. Postwar Britain had become an experimental laboratory for a mix of socialism and capitalism. Large parts of the country had been nationalized, including the health system, the steel industry, coal mining, parts of the retail sector, hotels and even travel agencies. Britain had become a synonym for the perfect welfare state, with all-encompassing care for its citizens. This applied particularly to the unions, which appeared to enjoy unbridled power. 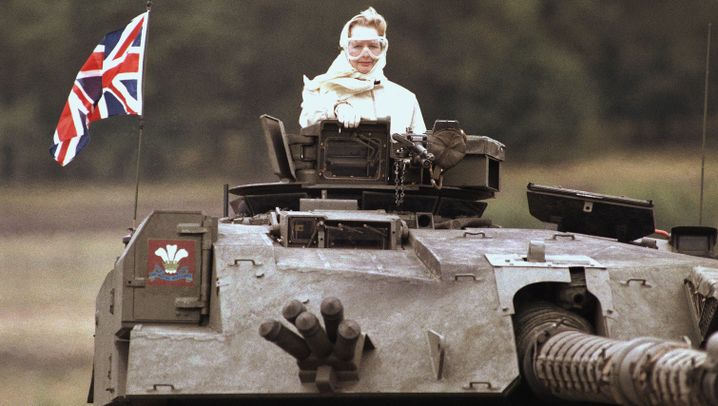 It was a system that strangled self-initiative. The country became increasingly less competitive; its industry declined to the point that it barely played a role in global business and the pound was in free-fall. And none of its politicians had the strength to introduce sweeping reforms. That is, until Thatcher became leader of the Tories and rose to become prime minister in 1979.

She wasn't an intellectual. She was a dyed-in-the-wool, straightforward politician. But she had a plan. The daughter of a grocer from Grantham in Lincolnshire was driven by the spirit of Calvinism, whose teachings promote economic and free market success as a path to salvation. Her principles, which have gone down in history as Thatcherism, were quite simple, but also catchy: the privatization of state-owned enterprises, radically curbing the unions' power, putting an end to chronic inflation and stopping confiscatory taxation. The free market was to return to the United Kingdom and the British version of socialism was to be eliminated. For a welfare state like Britain, it was a truly revolutionary concept.

It was also a risk that deserves special praise looking at it from today's perspective, both in Germany and elsewhere, where government decisions are largely driven by public opinion polls. Thatcher wanted to lead. She wanted to implement her ideas for the economy and society -- and she took the risk of getting voted out of office after just one term. In the end, her courage paid off and she won two further elections to the House of Commons.

Her hardest battle was without a doubt the one she waged against organized labor. She survived a one-year strike by miners who rose up to fight the closure of coal mines and the privatization of the industry. The strike paralyzed large parts of British industry, but the prime minister refused to be swayed from her plans. Eventually, the National Union of Mineworkers ran out of money and the resistance was broken. She then put all her efforts into curtailing the unions' power. Above all, she saw to it that the so-called Closed Shop rule, which made membership in a union for workers at many companies mandatory, was abolished.

The ruthless campaign against the unions may have been a purely British matter, but Thatcher's persistent denationalization led to a general rethinking of economic policy far beyond Britain's borders. The idea that the postal service, the telecommunications network, airlines or the railways should be in the hands of the government had been almost unchallenged in Europe and beyond prior to Thatcher's election. Calls for an end to these state monopolies were limited to a few laissez-faire economics professors like Milton Friedman in the United States.

Thatcher bucked this mainstream thinking and instead forged ahead by privatizing one government enterprise after the other: British Airways, British Rail, the Royal Mail, the telephone network -- everything was sold to private investors. These efforts weren't always successful, either. The tracks of Britain's train network became so neglected that they had to be placed back under state control.

Another Thatcher initiative that had an international impact was the so-called Big Bang of 1986, the liberalization of the financial markets. In many European countries as well as the US, governments followed the British example and lifted one state restriction after another on financial transactions conducted by banks. Ever since the 2008 Lehman Brothers collapse, the Big Bang has been one of her most controversial legacies.

All together, Thatcher transformed Britain from a half-socialist country to one of the world's most liberal economies. It's an achievement that none of her successors, even from the left-leaning Labor Party, sought to dismantle. In fact, the degree to which Tony Blair maintained the Iron Lady's policies was remarkable. He also found partial inspiration in Germany's Social Democrats, who had already begun orienting themselves towards a market economy at the end of the 1960s.

Thatcher's economic record isn't flawless. She failed, for example, to keep inflation down. When she left office, it had risen to 11 percent. Governments around the world now face the arduous task of re-imposing regulations on the financial sector. And Thatcher failed to achieve a renaissance of Britain's manufacturing sector, which today plays a very modest role in the global economy. The country's international economic significance stems entirely from its financial industry.

"Germany is going to have a few problems with its industry in the future," she informed us with a raised forefinger during her interview with SPIEGEL in 1993. She said the Germans hadn't restructured their industries as much as Britain had. But German industry undertook the necessary reforms years ago and has left Britain's economy far behind.

Thatcher's achievements are nonetheless impressive. There are few postwar politicians who have applied their ideas as persistently and remained as true to their principles. Margaret Thatcher's peacetime achievements are on a par with what Winston Churchill achieved during war. She changed her country and she changed the world.