When it comes to labor laws, even the toughest Italian reformers can lose their courage. For decades the government has tried to change them, but issues like easing stringent legislation that makes it difficult to fire workers hardly lend themselves to fame and honor in Rome. The opposition from the left-wing camp is simply too great.

But now, a decade after Monti's predecessor Silvio Berlusconi backed down in the face of protests, the overhaul of labor laws is back on Italy's political agenda. Monti is conducting talks this week with labor unions and workers. And as with previous rounds of labor market discussions, the issue of loosening employment protection laws will be a key sticking point.

Monti's government believes that if companies can more easily fire workers, they will also be more willing to hire them in the first place. And even though unions and political groups on the left are again threatening massive protests, they are also making an exception by showing their willingness this time to talk. "We can't keep going ahead and having endless discussions," Italian Labor Minister Elsa Fornero, who is an economics professor just like government head Monti, said earlier this week. If the coming days don't produce a compromise, the administration is expected to put forth its own proposal, unchanged, to parliament for a vote.

'Most Important European of the Year'

It's a new tune one is hearing in Rome these days. In some way or other, all of Italy's parties actually oppose the reform. That has been the case with almost every proposal put forth by the new administration. In the end, though, most have buckled. With each vote politicians decide anew whether to go on with the latest Italian experiment.

It all began like an epic poem. The country was on the verge of ruin, overrun with debts with no willing lenders. There wasn't even enough to pay the upcoming salaries of government workers. But then along came a wise professor who saved the entire country and possibly even the entire euro zone along with it.

Mario Monti took over as Italy's leader in mid November. Since then he has thoroughly shaken things up. So far, at least, it has worked -- even though no one understands exactly how or why.

Italian politics is now taking place on two stages. On the main stage stands 68-year-old Monti: the capable, intellectual and modest Italian, who has been heralded the world over and named by Time as "the most important European of the year." The words that come out of his mouth are intelligent. The people of Italy are thrilled at no longer being ashamed to say they are Italians when they travel abroad, as was the case when Monti's predecessor, a certain Silvio Berlusconi was in office. Berlusconi was known for his lousy jokes and his bizarre sexual affairs.

On the side stage party leaders and former party VIPs play a big act of parliamentary democracy. Few in the public are interested in what is going on or even pay much attention. These politicians still blow a bit of hot air in parliamentary sessions, but in the end they really just have to approve everything Monti puts in front of them. If they didn't, they would anger voters. And angry voters are something the elite definitely do not want. People are already upset at the so called "caste," the derisive description coined by Italian journalists of self-serving, full-time career political elites.

Now, with local elections coming up in May, political parties are completely at a loss as to how to present their roles as extras on the side stage to the people. How can they distinguish themselves when they can no longer resort to bashing their opponents? Perhaps position themselves against Monti? There is great temptation to dim his brightly burning light. But just as great is the fear of being punished by voters.

Italian democracy is experiencing a strange political phase that is nothing if not an anomaly. The administration hasn't been elected, but it is popular. And even thought the political "caste" has been elected, it doesn't have much of a say.

Italian President, Giorgio Napolitano, together with powerful groups in the country and especially those in the business world, pushed Berlusconi to resign from office and put pressure on parliament to tolerate a period of technocratic rule. Now it is experts from the upper middle class, including a number of millionaires, who are ruling the country and overhauling it to suit their tastes.

Financial markets are cheering, too. Spreads for Italian government bonds, which were trading at junk levels in November, have been slashed in half. Italy is once again a solid debtor.

Of course, it is the people who must bear the burden of reforms. Prices and taxes are rising, even as incomes remain among the lowest in Europe. In Germany, the annual average income is €41,000 ($54,000), while it is in €23,000 ($30,000) in Italy. Public institutions such as the health care system are crumbling. Unemployment is high. Now even those who have a job are required to work longer than before in order to earn their pensions.

An improvement of the situation is nowhere in sight. The Italian economy won't grow this year, but instead is shrinking. Meanwhile, the country's mountain of debt continues to pile up.

People are groaning and moaning. How can we get through the coming months? they are asking. And yet they aren't rebelling. To the contrary, most actually want to keep this "technocratic regime" that has made their lives so difficult. They even want it to stick around after the next election, which is now set for 2013, because, as many Italians ask, "What comes next?"

Should they vote for the old, familiar politicians who led them into this quagmire? The same politicians who only fought amongst themselves and didn't accomplish anything. The ones that brought Italy to the brink? In a survey, 58 percent of Italians say that they would prefer to vote for Monti -- a man who doesn't fly first class, pays his own way in museums and even forfeited his prime minister's salary when he accepted the position.

On the other hand, how can politicians woo over voters? Do they say, "Move forward with us back into the past!" Leaders on both the right and the left are bereft of goals, ideals and ideals. Politics seems to be in the process of self-immolation.

Berlusconi's party, Forza Italia, only exists on paper. It has fallen into factions and is mainly concerned with saving its own skin. Many see their political survival chained to the return of their former leader. Others see his return as the worst of all possibilities.

The opposition, center-left Democratic Party has become enmeshed in endless political infighting at the top and completely lost touch with its voter base. In recent mayoral elections in major cities such as Milan and Turin, voters cleared away candidates ordained by Rome in primaries, making room for alternatives far removed from the traditional party base.

Italy could get used to politics without parties, warns Pierferdinando Casini, the head of the centrist, Christian Democratic UDC party. Casini would thus prefer to make Italy's new hero, Monti, his party's next top candidate. But Monti says he would rather return to his university job.

Monti also has no desire to take on a side job as head of the Euro Group, the important circle of 17 euro-zone finance ministers. Its current president, Luxembourg's Prime Minister Jean-Claude Juncker, who has grown tired of the job, had proposed the Italian for the post and others in the group immediately signaled their approval. But Monti quickly waved off the suggestion he could do two jobs at once like Juncker.

"Do you believe," he replied to a question about the possibility, "that an Italian head of government can take on additional responsibilities?" 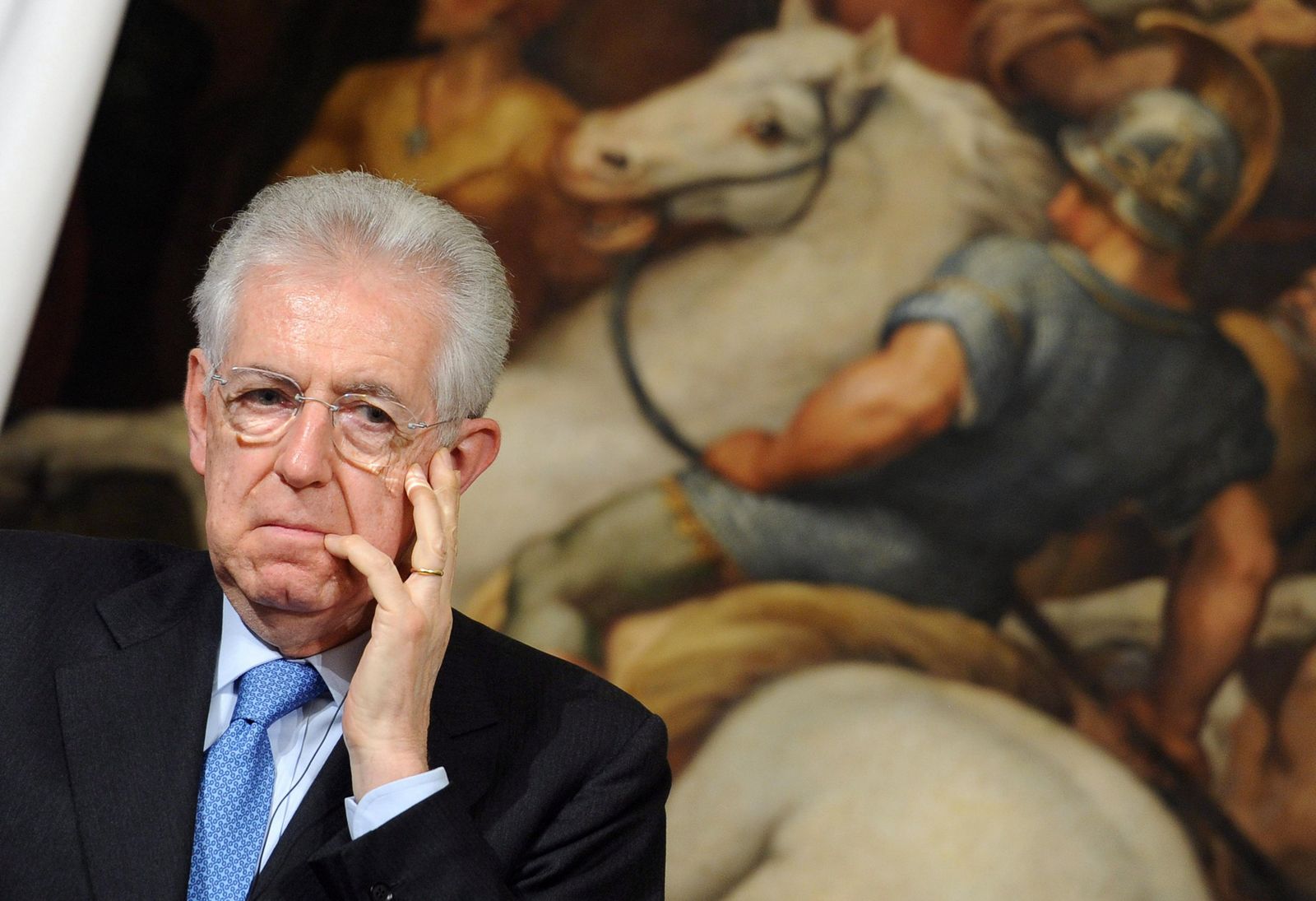 Time has named Mario Monti the "most important European of the year".