There are those who would argue that, at its core, the European Union isn't facing a currency crisis at all. Rather, the primary problem facing the continent is a dearth of adequate political leadership.

It is a position which would appear to have received a boost on Monday, as markets across the world have reacted positively to the prospect of respected banker Mario Monti in Rome taking the place of Silvio Berlusconi, who resigned as Italian prime minister on Saturday. Not only did stock indexes in both Asia and Europe initially trend upwards on Monday morning, but the interest rate on Italian sovereign bonds fell to 6.4 percent, well below last week's dangerous high-water mark of above 7 percent.

Italian President Giorgio Napolitano asked Monti on Sunday to form Italy's next government after Berlusconi stepped aside as promised after Italian parliament passed a package of belt-tightening measures. On Monday, Monti began negotiations with the country's leading political parties in an effort to assemble his cabinet. He is reportedly interested in staffing his cabinet entirely with experts, rather than with politicians.

The approval of the austerity package on Saturday was "heartening," said Chancellor Angela Merkel over the weekend. "I hope that confidence in Italy is restored, which is crucial for a return to calm throughout the euro zone."

In a €3 billion ($4.1 billion) auction on Monday of five-year sovereign bonds, Rome was forced to pay 6.29 percent, far higher than the 5.3 percent it paid on a similar auction in October. Still, the rate was well down from last Wednesday's high of 7.4 percent on 10-year bonds.

The naming of Monti to take over in Rome marks the second time in a week that a euro-zone country has opted for a technocrat government to lead it out of crisis. Last week, former European Central Bank vice president Lucas Papademos was installed in Athens and tasked with pushing through additional austerity measures to ensure that his country receives a badly needed €8 billion European Union bailout tranche. He is expected to lead the government until elections sometime next spring.

Many in Rome predict that Monti, too, will be a temporary solution. Over the weekend, Umberto Bossi, the powerful head of the Northern League, said he would not be given a "blank check." Several political parties have said they will support him, but with general elections not scheduled until 2013, many question whether he can succeed in remaining in office for that long.

Widely Respected in the EU

"The decisions which Monti will take must pass in parliament and I think that with such a heterogeneous majority, he will have many problems," said outgoing Interior Minister Roberto Maroni, according to Reuters. "I believe this solution will lead to many problems."

Furthermore, the challenges facing Monti are monumental. Even as Italy's economy is considered, if not healthy, then at least functional, the country carries a debt of €1.9 trillion, worth 120 percent of its annual economic output. Markets are sure to once again shy away from the country at the slightest sign that Monti is unable to push through the tough reforms that everyone agrees are necessary.

Still, Monti is widely respected in both Italy and Europe, having made a name for himself as a strong European Competition Commissioner. In addition to blocking a controversial merger between General Electric and Honeywell in 2001, he also slapped a fine of €500 million against Microsoft in 2004 for abusing its market position.

Indeed, Monti, 68, quickly gained the nickname "Super Mario" in Brussels. At home in Italy, however, he is more often referred to as the "Italian Prussian." "I have always been considered to be the most German among Italian economists, which I always received as a compliment, but which was rarely meant to be a compliment," Monti said last week during a panel discussion in Berlin.

During the talk, he also said that "by introducing more competition, we will in due course introduce more merit and less of a role for nepotism, clientism, corruption, whatever." Recent television clips showing Monti filling up his own car at the gas station -- in a country where politicians have been lampooned recently for not knowing the price of petrol -- have added to hopes that he will be a figure of integrity.

Most of all, however, Monti is a stark contrast to Berlusconi, whose recent reign has been characterized by a series of trials related to his business interests as well as embarrassing scandals connected to his alleged profligate sex life. His departure on Saturday was celebrated by people singing and dancing in central Rome.

Berlusconi said late last week that he would not run in new elections in Italy. But in a video released on Sunday, he indicated that his country had not yet seen the last of him. "I want to say with great clarity to those who cheered at what they call my exit from the scene that, as of tomorrow, I will double my efforts to improve Italy," he said, while emphasizing that his departure was not the result of losing a confidence vote. "I will not surrender until we have modernized the country." 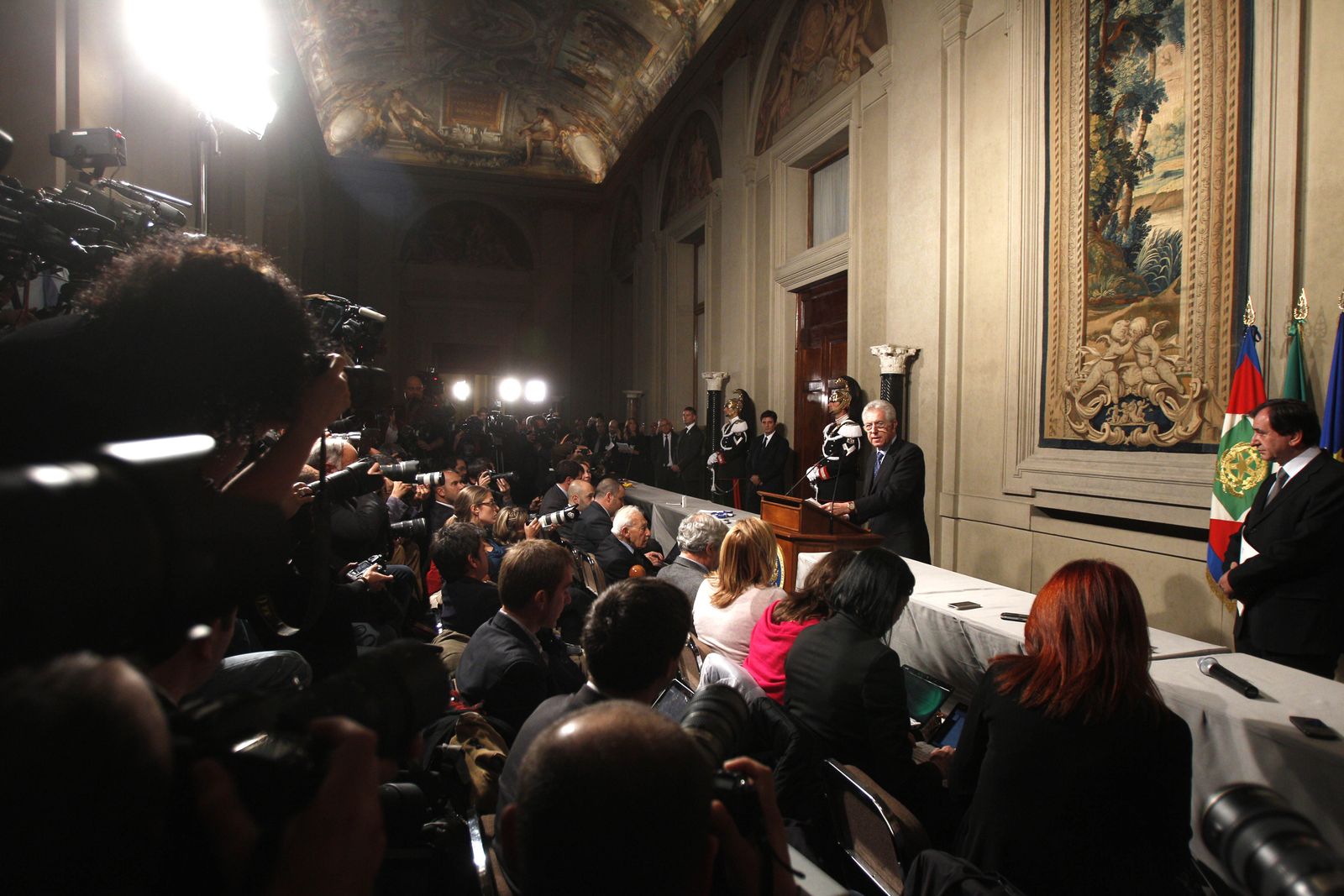