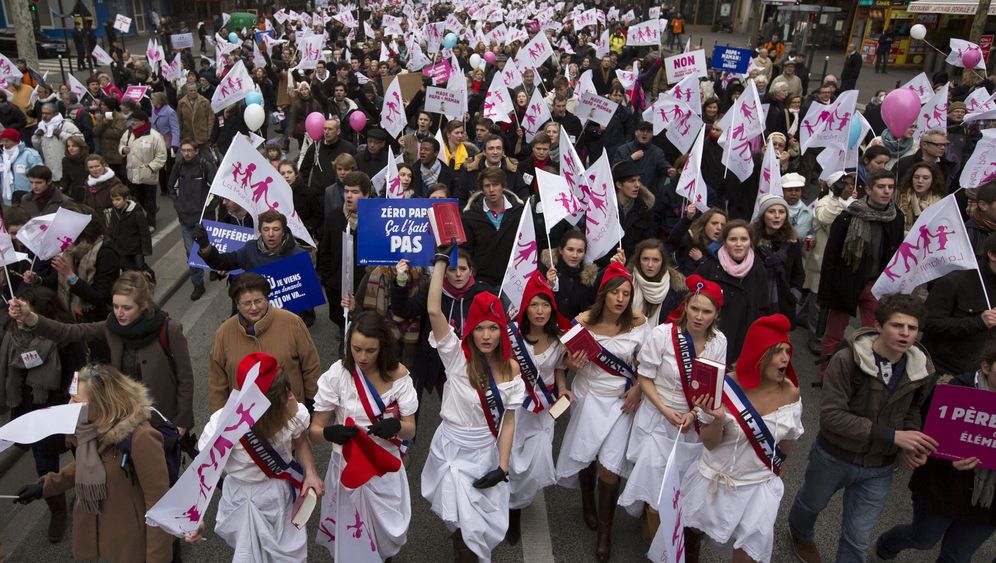 Jean-François and Amelie brought their children with them for the day, and could be seen holding up placards next to their baby buggy reading, "Papa and Mama -- nothing is better for a child" and "Children can only be made with a man and a women" as they stood at the foot of the Eiffel Tower.

"We are demanding the withdrawal of the gay marriage law," said the 39-year-old businessman as his wife handed out chocolate bars.

"Gays shouldn't be allowed to adopt children," added Yvonne Raguet, 60, a proud mother, three-time grandmother and practicing Catholic who posed in front of the Paris landmark together with her husband. "It breaks with all traditions."

The couples, both from the Paris area, are among the hundreds of thousands who made their way on Sunday to the "Protest For All," the main demonstration against French President François Hollande's plan to approve full-fledged gay marriage in the country. Today, same-sex couples can have legally registered partnerships, but they are not granted full marriage rights.

The protest attracted Catholic bishops as well as prominent French politicians from both houses of parliament, and tens of thousands of people from all across the country traveled to the capital to attend the rally. They chanted slogans and played music, creating a party-like atmosphere under the gray skies. Because of the expected influx of people, a match planned for Sunday by football club Paris Saint-Germain had to be held two days earlier.

'The Government Can't Ignore Us'

The protest's organizers, a coalition of religious groups, conservative citizen's initiatives and political opposition parties, hoped to exceed the number of participants in the last similar demonstration in November. "Any figure over 300,000 would be a success," said one of the young organizers of the rally. "Then the government can't simply ignore us." Later in the day, Paris police estimated the size of the crowd at 340,000.

One of the main backers of the protests has been Virginie Tellenne, a comedian and born again Catholic. The eloquent blonde protest organizer has in recent weeks gone by the nomme de guerre "Frigide Barjot," a play on Brigitte Bardot that means "Frigid Loony". The comedian, who likes to call herself "Jesus' press officer," is well-known for her 2009 campaign "hands off my pope" defending Pope Benedict XVI, who was under fire at the time after lifting the excommunication of rebel bishop and Holocaust denier Richard Williamson. Tellenne is also fond of describing herself as a "Catholic mouthpiece that isn't being heard."

'We Love All Homosexuals'

Barjot, famous for outrageous lines like, "Balls don't have ovaries," has drawn together more than 30 groups into a common front that includes the "Catholic Family Alliances," the "Collective for Children" and the association "Love and Family." There are even some gay groups on board, including one that calls itself "Even Gayer without Marriage" and "Homovox." Other religious groups have also come on board, including conservative Protestants, Buddhists and the patriotic Muslim group Sons of France. The only group that marched on its own was the arch-conservative Christian group "Civitas," for whom Barjot's message comes across as being too "gay friendly".

Using Facebook and Twitter, the coalition of groups succeeded within four months in establishing a country-wide infrastructure without drawing allegations that it was guilty of anti-gay or lesbian sentiment. "We love all homosexuals," Barjot said at the start of the rally. She added that her "Demo for All" had the sole goal of rejecting a draft law that would "open marriage to persons of the same sex" that is to be debated by the French parliament at the end of January.

The law, which supporters are referring to as "Marriage for All," has long been a sensitive issue for religious groups in the country. It's one that has turned ugly in recent months, too, as the institutions have discussed adjusting marriage to fit a reality in the country that has changed over the years. Touching as it does on beliefs and values, the debate has also descended at times almost to the level of trench warfare in France's newspapers and television talk shows.

The front lines cute right through all societal, political and religious camps -- and the polemics have come from both the left- and right-leaning media. The front page of a recent issue of the French Catholic daily La Croix had the headline, "For the church, the union between a man and a woman is a symbol of the connection to Christ." Meanwhile, the left-leaning newsweekly Le Nouvel Observateur ran the headline splashed its cover this week with "A Manifesto: Yes to Marriage for All." Finally, the conservative Le Figaro described the protest as a "change in consciousness that could change the path of history."

During his campaign, Hollande said in 2011 that, if elected, he would move to grant the full status of marriage to gay couples, following the example of a dozen other countries. It was intended as an upgrading of the country's 1999 PACs civil union law, which granted a number of rights to registered partnerships -- particularly in regard to housing, taxes and inheritance. The law has proven at least as popular for heterosexual pairs as it has been for same-sex ones.

But "Marriage for All," which public opinion polls show is supported by the majority of French citizens, would elevate the partnerships to the full status of marriage, including the right to adopt children. It is precisely the adoption provision that has attracted such large protests.

Supporters see the legislation as an overdue equal treatment of gays and lesbians and the estimated tens of thousands of children same-sex couples are raising together. Opponents, however, believe it will demean terms like husband and wife or turn father and mother into asexual designations, like "parents". "This project," protest organizers wrote, "wants to eliminate sexual distinction and with it the foundations of human identity."

They claim it represents a threat to families: If two men or two women were to adopt boys and girls, they would be robbing those children of their traditional role models. Critics fear a "deep discrimination and unfairness" for children raised in non-traditional families. In addition, they warn of an end to "natural parenting," which they say could pose a threat to social cohesion. They argue "Marriage for All" could pave the way for gays and lesbians to demand the right to artificial insemination or to seek surrogate mothers to bear their children.

It is that scenario that upsets those socially conservative French taking to the streets the most. And the opposition quickly sensed the opportunity to promote the rally as a vote against the policies of Hollande's Socialist government. For the conservative UMP, which fought for weeks over a potential successor after former French President Nicolas Sarkozy got voted out of office last spring, it represented a unique opportunity to position itself as the true representative of the middle class and of conservative values.

But the legal reforms also have some supporters within the UMP, including former Health Minister Roselyne Bachelot. And even the right-wing extremist Front National is divided over the issue. Indeed, some within Hollande's own Socialist Party oppose "Marriage for All". Nevertheless, the French president intends to push through the reform, which he has described as a "great societal measure" and has said he will not bow to "resistance from the streets".

So is the failure of the "Demo for All" pre-programmed? Theodora Boone, deputy mayor of the Parisian suburb Levallois 68 doesn't think so. "Hollande can't just ignore the resistance," the centrist politician said. "It's a question of the future of our society. To ignore that would cause him enormous political damage."