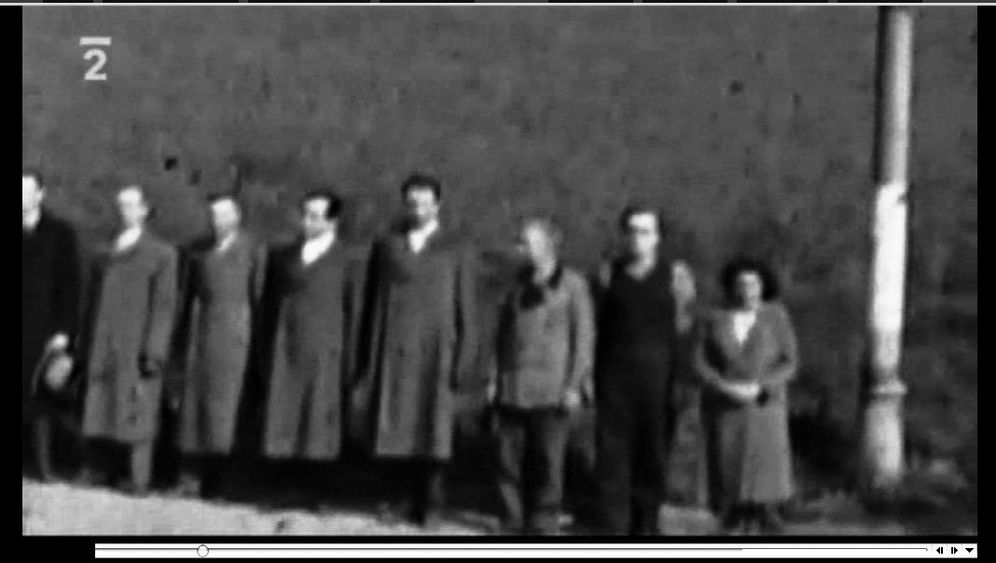 For decades, the images lay forgotten in an aluminum canister -- almost seven minutes of original black and white film, shot with an 8 mm camera on May 10, 1945, in the Prague district of Borislavka during the confusing days of the German surrender.

The man who shot the film was Jirí Chmelnicek, a civil engineer and amateur filmmaker who lived in the Borislavka district and wanted to document the city's liberation from the brutal Nazi occupation. Chmelnicek filmed tanks rolling through the streets, soldiers and refugees. Then, at some point, his camera also caught groups of Germans, who had been driven out of their houses and into Kladenska Street by Red Army soldiers and Czech militiamen.

Chmelnicek's film shows how the Germans were rounded up in a nearby movie theater, also called the Borislavka. The camera then pans to the side of the street, where 40 men and at least one woman stand with their backs to the lens. A meadow can be seen in the background. Shots ring out and, one after another, each person in the line slumps and falls forward over a low embankment. The injured lying on the ground beg for mercy. Then a Red Army truck rolls up, its tires crushing dead and wounded alike. Later other Germans can be seen, forced to dig a mass grave in the meadow.

A Shock to Czechs

The shaky images show an event that has been described again and again by eyewitnesses and historians: the systematic killing of German civilians. Yet the film comes as a shock to Czechs. "Until now, there was no footage whatsoever of such executions," says Czech documentary filmmaker David Vondracek, who showed the historical images on television. "When I watched this for the first time, it was like seeing a live broadcast from the past."

The only such images known before were taken by a US Air Force camera team. That footage showed injured Germans lying on the ground in Plzen, in what was then Czechoslovakia, in early May 1945. The images included some dead bodies, but they didn't show a liquidation, from beginning to end, like this one.

Vondracek's documentary about Czech atrocities, called "Killings, Czech Style," aired during primetime on Czech state television just two days before May 8, the anniversary of Nazi Germany's surrender. The broadcast marks yet another milestone on the Czech road toward confronting a not-always-comfortable World War II past -- a path the country has been working its way down for years.

Even organizations representing "Sudeten Germans" -- ethnic Germans expelled from Czechoslovak territory after the war -- took notice. Horst Seehofer, governor of Bavaria, plans to pay an official visit to Prague soon, making him the first holder of his office to do so since World War II. "A great deal has come into the open where the Sudeten Germans are concerned," Seehofer commented recently.

Victim to Acts of Revenge

Following Nazi Germany's defeat, the Czechs and the Red Army expelled around 3 million ethnic Germans from the Sudetenland and the rest of Czechoslovakia. In the process, up to 30,000 civilians fell victim to acts of revenge. Only a small minority of them had been Nazi perpetrators. Germans and Czechs had lived side by side for decades before Hitler's 1938 annexation of Bohemia and Moravia, the two regions that make up the majority of the Czech Republic today.

No one knows who singled out the Germans in Borislavka, nor what crimes they were accused of committing. They were most likely killed by Red Army soldiers, perhaps also by "Revolutionary Guards" -- members of Czech militias. Those firing the shots may also have included former Czech collaborators, who had previously worked with the Germans and who wanted to clear their names with a show of anti-German brutality.

Helena Dvoracková, amateur filmmaker Jirí Chmelnicek's daughter, was one of the first to see the images of these executions. She doesn't remember how old she was when her father set up his projection screen and ran the film. "I don't remember either whether he said anything about it -- and really, there wasn't much to be said," she says.

Her father kept the film hidden at home for decades. Communist police even came calling -- someone had figured out that the footage existed. The police asked about the film and threatened Chmelnicek. But the filmmaker didn't turn over his reel. He wanted the world eventually to learn what had been done to defenseless people that day in May in Borislavka.

Ten years ago, long after her father's death, Helena Dvoracková offered the historical footage to a well-known Czech television historian, but the historian kept the film under wraps. "People will stone me to death if I show this," he supposedly said, and placed the reel in the state television station's archives. Documentary maker Vondracek found it there, after a cameraman who knew the amateur filmmaker's family told him about it.

Today Borislavka is one of Prague's nicer districts, and tall grass has grown over the meadow where the executions took place. Vondracek now wants to start a search for the Germans' mass grave. "It must be somewhere under the meadow," he says.

Likely not all that far away from a memorial plaque for two Czechs who fell in the battle against the Nazis on May 6, 1945.