Just a few days ago, Ireland was insisting that it would not need a financial rescue package from the European Union. Now Dublin has changed its tune. On Sunday, the Irish government officially requested help from the EU and the International Monetary Fund (IMF). Europe's finance ministers quickly agreed to the aid in a hastily convened telephone conference on Sunday evening.

Irish Prime Minister Brian Cowen said on Sunday a package of less than €100 billion ($137 billion) had been agreed on in principle. Its main aim will be to support Ireland's ailing banks. EU and IMF experts had arrived in Ireland on Thursday to examine the country's books to get a sense of what kind of assistance Ireland would require.

The news agency Reuters quoted senior sources in the EU as saying the package would total €80 billion-90 billion. The EU's Commissioner for Economic and Monetary Affairs Olli Rehn said that the exact amount would be decided at the end of November after further negotiations.

The bailout threatened to plunge Ireland into a political crisis on Monday as the junior partner in the ruling coalition, the Green Party, called for a general election in January to give the Irish people "political certainty." It said it would pull out of government once the government had agreed all the necessary fiscal measures and secured financial support.

"The past week has been a traumatic one for the Irish electorate. People feel misled and betrayed," the Green Party said in a statement.

The coalition of Fianna Fail, the Greens and independent politicians has a parliamentary majority of three and faces a December 7 vote on a rigorous package of austerity measures.

The EU's finance ministers immediately agreed in principle to a rescue package on Sunday evening. "We welcomed the request of the Irish government for financial assistance from the European Union and the International Monetary Fund," Rehn said. "Providing assistance to Ireland is warranted to safeguard the financial stability in Europe." He said experts from the EU, IMF and the European Central Bank would prepare a three-year package of loans by the end of the month, which would "address both the fiscal challenges of the Irish economy and the potential future capital needs of the banking sector in a decisive manner."

Justifying the request for help, Irish Finance Minister Brian Lenihan had said earlier on Sunday that his country had accumulated a deficit of €19 billion that it could not currently refinance on the financial markets. He said tens of billions of euros were probably needed to help ailing banks in the country, but insisted it would not be a "three-figure sum."

Lenihan insisted however that Ireland's low 12.5 percent corporate tax would not be touched, despite calls from other European politicians for the tax rate to be raised.

The United Kingdom and Sweden, which are not euro-zone members, have also said they will provide bilateral aid to Ireland. British Chancellor George Osborne has agreed to pay 7.5 billion pounds (€8.8 billion or $12 billion) toward the bailout.

On Sunday, Prime Minister Cowen called on the Irish people to "act together in the national interest." "To the Irish people I say simply this: We should not underestimate the scale of our economic problems, but we must have faith in our ability as a people to recover and prosper once more."

Speaking on Germany's ZDF television ahead of the ministers' conference, German Finance Minister Wolfgang Schäuble said that helping Ireland could prevent the debt crisis spreading to other countries. "We are not defending just one euro-zone member," he said. "We are defending the stability of our common currency."

German Economy Minister Rainer Brüderle said that the economic recovery in Germany was not threatened by the Irish crisis. "If help is provided for Ireland, that will not put the upturn in Germany in danger," he told the newspaper Bild.

Markets seemed to react well to the news. The euro increased in value on Monday morning, as did many Asian stocks.

Pressure on the Irish government to accept EU help had increased in recent days, in the hope that a rescue package would reassure the markets. Although the government does not need to immediately refinance its debt, Ireland's problems have caused turbulence on the financial markets. Other beleaguered euro-zone countries such as Greece and Spain have seen their borrowing costs climb as a result, with rises in spreads on Irish, Greek, Portuguese and Italian government bonds.

Losses at five Irish banks have required a €45 billion bailout from the government at a time when tax revenues are significantly down due to the recession. The bank bailout has cannibalized the public finances, pushing the public deficit temporarily to 32 percent of GDP for 2010, 10 times that allowed by EU rules.

The Irish rescue package is the EU and IMF's second massive bailout this year, after the €110-billion rescue of Greece in May. 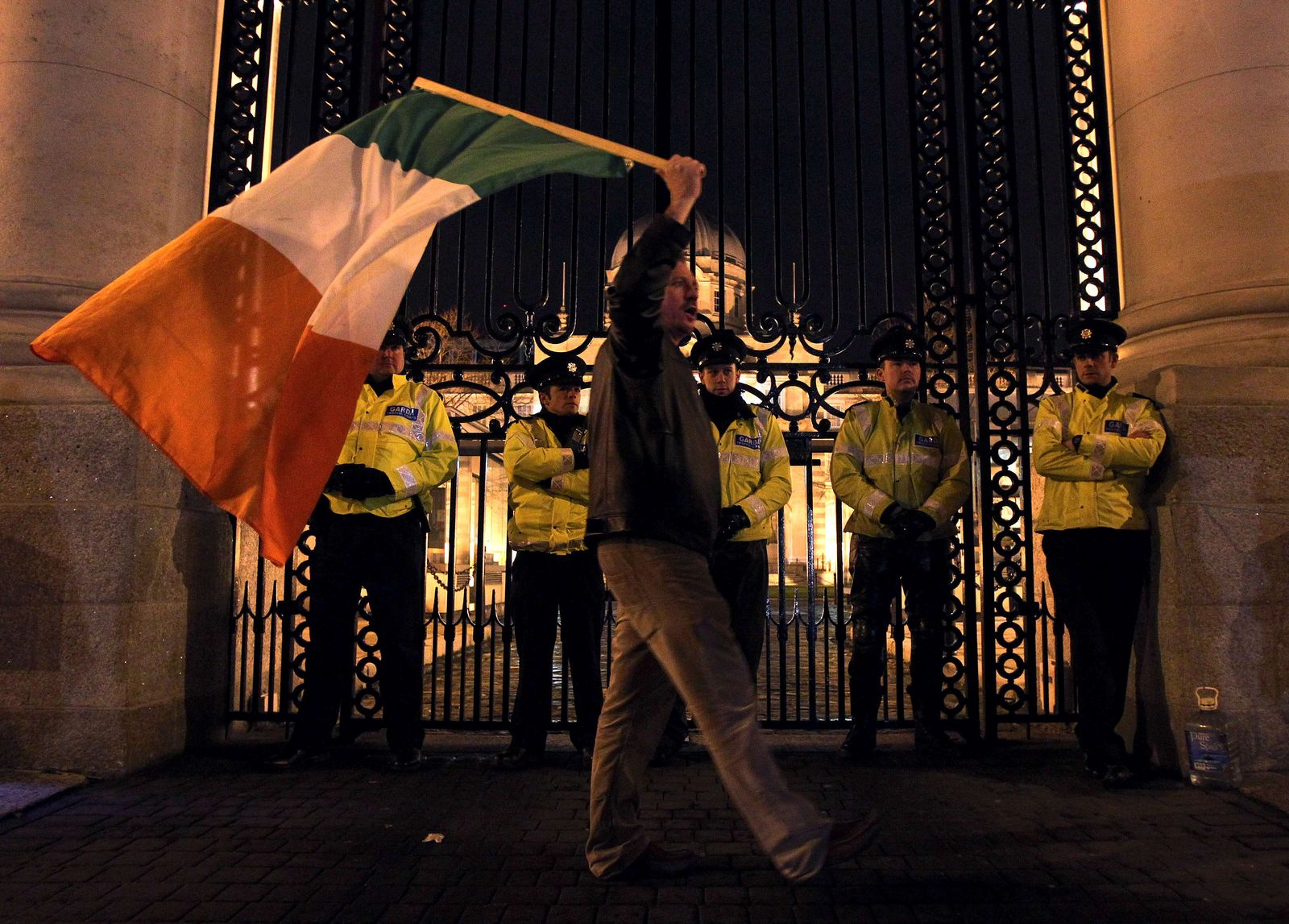 A protester waves a Irish flag outside the Irish prime minister's office in Dublin on Sunday: The EU and the IMF have agreed to a massive bailout for Ireland.