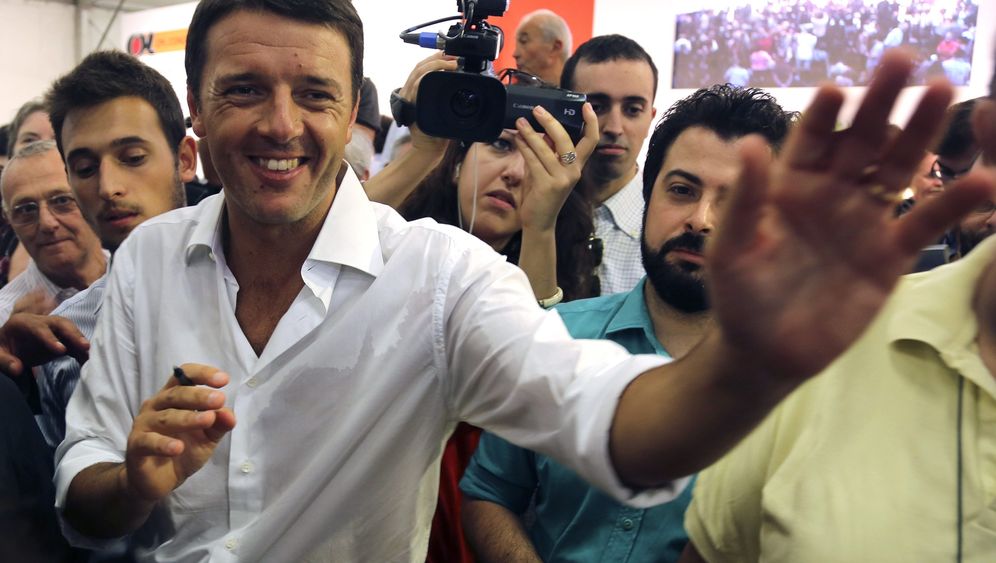 Last Monday, he was in Rome. A week earlier, he ploughed through northern Italy. In just two days, he made stops in 20 cities -- from Mantua and Monza to Bergamo and Brescia -- logging 3,250 kilometers (over 2,000 miles) in the process. Everywhere he went, the rooms were packed and the crowds were enthusiastic. Now his journey is taking him to southern Italy, starting with Naples.

The journey is being made in a white camper with the word "Adesso!", or "Now!", written in big letters on the exterior. Inside sits Matteo Renzi, the 37-year-old mayor of Florence. He is confident, relatively young for an Italian politician -- and sparking fear within the establishment. He is determined to win this spring's parliamentary election on his own, to become prime minister and to lead Italy for the next five years.

The resonance has been massive. More than anyone, young, Internet-savvy Italians are excited that someone is finally sounding the call to the barricades. After all, the older generation has yoked them with unemployment and debts. Even older conservatives who used to vote for former Prime Minister Silvio Berlusconi are jumping on the bandwagon. Fausto, for example, a self-employed construction engineer in his mid-50s, says: "If Renzi runs, he'll get my vote!"

Many of Renzi's supporters are former left-wing voters who had stopped voting because they were disappointed by their parties. But now they are suddenly enthusiastic again. Many have donated to his online "Fai il pieno al camper" ("Fill Up the Camper") campaign, which collects small donations in small increments starting at €5 ($6.50) to help bankroll his tour through Italy. By mid-Wednesday, the campaign had already collected almost €33,000 in donations.

Although Renzi's campaign website already makes it seem like he's on a triumphal procession, his race to the top has actually just begun. Before this stylish Florence native can prepare to conquer Italy, he must first win the battle to become his party's leading candidate. To do that, he still has to win the primaries of the center-left Democratic Party (PD), an unhappy marriage of former communists and erstwhile supporters of the Christian Democracy party, which dominated Italian postwar politics until it was destroyed by corruption trials in the early 1990s.

This first step will perhaps be the hardest -- particularly because not everyone in the PD is celebrating this political dynamo out of Florence. Many find him "abnormal" and "populist," and some even detest him. The reason for this is clear: Renzi doesn't just want to chase Berlusconi and his followers from the halls of power. He also wants to dethrone the leaders of his own party. "People who have hunkered down in parliament for 25 to 30 years cannot make decisions about our future!" he shouted at a recent political event in a marketplace. Italy needs "new faces," he added, including in the PD. For that reason, he urges people to "consign to the garbage heap" veteran party bigwigs, including ex-Family Minister Rosy Bindi, ex-Prime Minister Massimo D'Alema, ex-party secretary Walter Veltroni -- and anyone else who comes to mind. In his eyes, they all need to go. Italians need to banish the generation of politicians that arose out of the student protest movement of the late 1960s to the history books, he says.

But the people he is referring to are determined to avoid this fate. Senior PD officials and the numerous factions within the party have worked to hammer out a deal that will see Pier Luigi Bersani, the party's current leader, nominated as the party's leading candidate and given the party's blessing through a series of intraparty elections similar to presidential primaries in the United States.

For the first time in a long time, the party has a chance to become the strongest political force in the country after elections in the spring. Polls currently give the PD some 27 percent of the vote. Berlusconi's right-wing People of Freedom (PdL) party, on the other hand, is languishing below the 20 percent mark. The Northern League, the PdL's former coalition partner, polls at between 5 and 6 percent. And even the star of Beppo Grillo, the populist comedian turned political upstart, isn't shining so bright anymore: The polls say he would hardly win more than 15 percent of the vote.

Given these circumstances, it is entirely possible that the PD could lead the next coalition government in Rome. If that happened, Bersani would be the prime minister, but there would of course also be choice political appointments for D'Alema, Bindi and the other members of the party brass.

A History of Winning without Party Support

Bersani will turn 62 this weekend. He is a respectable political functionary and a smart man -- but completely devoid of charm. The party apparatus is behind him, and he will run as their top choice. But even his friends worry -- presumably with good reason -- that Renzi could brazenly brush him aside.

This wouldn't be the first time. In 2008, Renzi announced that he wanted to run as the PD candidate for mayor of his hometown of Florence. But the party had already decided on another promising candidate long before. Party bigwigs advised Renzi to wait a bit longer for his time to come. But he didn't wait. Instead, he launched a furious nomination campaign and swept the designated leading candidate from his position despite the opposition of party dignitaries and string-pullers. When the communal elections were finally held in 2009, the same fate awaited Renzi's opponent from the Berlusconi camp: Renzi won in a landslide. A year later, a poll found that Renzi was the most popular mayor in Italy.

In Renzi's view, history now stands to repeat itself. He started his camper journey in mid-September in the northern city of Verona. There, he officially announced his bid for power. He put on a show like the ones seen in US elections -- with a bit less fanfare, perhaps, but still impressive. A video showed scenes from the last quarter century: the former Yugoslavia, Ronald Reagan, the Berlin Wall. Commenting on the images, Renzi said: "All of that is part of the past -- but the faces of the political class are always the same." Now, everyone is supposed to make room for him.

Renzi also says that politicians should lose their official cars, their bodyguards and their high salaries. While that strikes career politicians as nonsense, the crowds love it. They can't stand to see the old actors on Italy's political stage anymore. They're either corrupt or incompetent -- and boring at best. The consensus at such rallies is that they all need to go.

'Kiss of Death' from Berlusconi

The Italian media has dubbed Renzi "the scrapper." But it's not just his fellow PD members who are watching his offensive with concern. It's also his political opponents. Silvio Berlusconi tried to disarm the successful young populist from the left-wing camp by saying: "He is one of us …. He talks like us." But Renzi adroitly defended himself from what the Italian daily La Repubblica called Berlusconi's "kiss of death," saying that Berlusconi will be the first person he scraps.

Some people say that Renzi's public appearances remind them of those of the young Berlusconi, back in the days when he could still inspire excitement. For example, as Berlusconi once did, Renzi summarizes his political program with three cryptic words: "Future, Europe, Merit." Of course, it doesn't make much sense, but it still creates a positive feeling. Renzi repeats this slogan in every city he visits. And every time he does, it prompts the crowds to swing the placards bearing either the words "Matteo Renzi" or "Adesso!" What's missing, of course, are PD party symbols, red flags and other objects denoting support for the party.

Meanwhile, senior PD officials are sitting at home watching all of this on TV, uncertain of how they should react. Some of them grumble that Renzi doesn't have a program for governing. Another complains that not even the "Adesso!" slogan is his own. Granted, the motto was first adopted three years ago by fellow politician Dario Franceschini during a failed bid to be elected as secretary of the PD.

Today, Renzi dismisses such charges of plagiarism as "completely forgotten." And he might be right. After all, at the time it was entirely meaningless who would be the leading candidate of a party that wasn't going to be part of the ruling coalition anyway.

Still, there is one person who does remember -- and fondly. The man who won out against Franceschini and his "Adesso!" slogan back in October 2009 was none other than Pier Luigi Bersani -- the very man that Renzi is now trying to unseat as the PD's leading candidate.