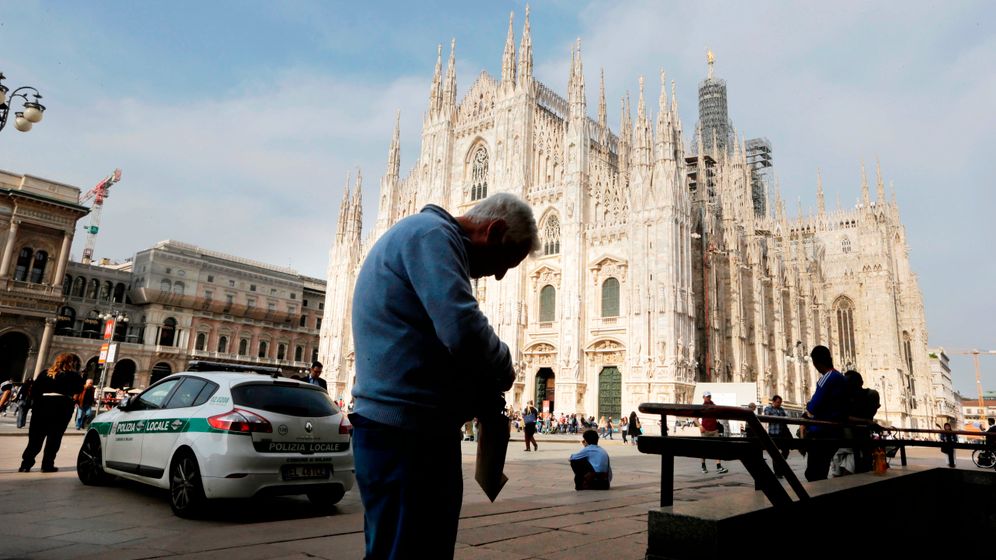 Mirko Lami, a portly 50-year-old, has demonstrated, gone on strike, and quarreled with people on TV talk shows and in marketplaces. He's even gone on a seven-day hunger strike. Anything to save his job.

He still has a "solidarity contract" -- a fixture in Italy designed to avoid full redundency -- which provides him with €950 in exchange for a few days of work per month. But that will be over soon too, and then he will face unemployment, as do his 2,000 co-workers at La Lucchini in Piombino.

The Tuscan town of 34,500 has a port from which tens of thousands of tourists head to the islands of Elba or Sardinia annually. It also has an ironworks plant with a gray and rusting coking plant, a relic from the industrial Stone Age.

Now an Indian steel baron intends to take over the plant, but only wants to retain 700 of the employees. Another thousand jobs among the companies that supply the plant are also in jeopardy, and there are already "for sale" or "for rent" signs on almost 100 businesses in Piombino. The crisis looms over the city.

And it's not just Piombino. Stores are closing, tradespeople are being let go and manufacturing is collapsing all over Italy, especially in the south. Many young academics are leaving the country. While productivity elsewhere has climbed over the past two decades, it has stagnated in the Italian manufacturing industry. There has been hardly any growth for at least as long. The crisis has struck an economy that was already ailing: Since the summer of 2007, Italy's overall level of industrial production has declined by a quarter.

Italy's managers and company-owning families, meanwhile, have padded their wallets, both legally and illegally. Fired Ferrari head Luca di Montezemolo was given a €27 million farewell. Managers and the "brokers" of an oil deal with Nigeria reportedly stashed away €200 million.

Prominent business figures are facing embezzlement charges everywhere. Many ownership families have preferred to take money out of their companies instead of reinvesting. "Not even Superman," says economic expert Salvatore Bragantini about Telecom Italia, could ever save that company from the "hole in which Telecom stakeholders have thrown it."

After Berlusconi was sidelined and the boring Enrico Letta was replaced by the sympathetic and purposeful 39-year-old Matteo Renzi as the head of government, many thought that Italy was finally on the right track. But it's not.

On the contrary: The land is stuck in a recession. Its levels of sovereign debt, the number of bankruptcies and the rate of unemployment are perpetually setting new records. As a result, some Italian political leaders have long sought a multi-billion euro growth stimulus program -- a call that new European Commission President Jean-Claude Juncker is likely to heed. The magnitude and form of such a program, however, still needs to be determined so that it at least maintains the illusion of conforming with the Stability and Growth Pact.

But without many other changes in Italy, including its grasp on reality, simply injecting money isn't likely to change much. "For 20 years," economic expert Daniel Gros told La Repubblica newspaper recently, Italy has been claiming that others need to "give it another year, then you will see our wonderful reforms."

And even Mario Draghi -- the Italian president of the European Central Bank, which has been flooding the continent with cheap money, especially in crisis flashpoints like Italy -- bluntly admonished the country in August for failing to implement substantive structural reforms

But it's not that Italy is even lacking in money. The assets of Italian banks and insurance companies have risen by over €1.2 trillion since 2008. But manufacturing asset bases have, by contrast, fallen by €200 million. It's a grim distribution: the one sector doesn't seem to want to invest, while the other is unable.

Italians themselves face a similar situation. On average, every Italian has about €4,000 more in net assets than the average German, but wealth is even less evenly distributed in Italy than it is in Germany, weakening domestic demand: The rich have everything, the poor can't afford anything.

Many of Italy's current problems stem from pre-crisis times: Taxation on business income, for example. The World Bank ("Paying Taxes 2014") estimates Italian companies' tax burden at 65.8 percent. Only France (64.7) and Spain (58.6) approach those drastic levels, and they face similar problems. The European average is dramatically lower, at 41.1 percent, while Italy's neighbors, Switzerland and Croatia, have extremely low rates of 29.1 and 19.8 percent respectably. Given that, who would want to invest in Italy?

"Having Europe's highest business taxes is ruining us," Massimo Giuliani, 55, the mayor of Piombino, agrees. Ha also argues that energy costs are much too high and that infrastructure is shoddy.

But the mayor is convinced that now everything is going to be much better. The port is currently being dredged, and soon giant freighters with six or seven-times the current permissable capacity will be able enter and exit while carrying, for example, steel from La Lucchini. The government wants to spend €50 million to modernize the steelmaking plant, and a new power plant is supposed to provide cheap electricity. In short, Giuliano says, there is "no better place in Italy for steel production."

But he may occasionally want to look at the large, colorful map that hangs on the wall of his office. It stems from his predecessor and portrays the "City of the Future 2015," as carefully conceived by architects.

In it, the highly modern-looking Lucchini site is surrounded by a technology park, an iron and steel museum, music and dance stages, energy-saving houses, parking spots and green areas. Everything is wonderfully designed, a communal dream on 2,500 acres.

The dream stems from the year 2008 -- its fulfillment was to cost €50 million. Over the course of three years, the project was advised, conceived, discussed, but then it became clear: There is not and will not be any money for it. Basta. And that too is typical of Italy.

In Italy, projects are endlessly planned, designed and then cancelled -- sometimes before, sometimes after construction. Several billion euros have been invested in half-finished hospitals, sports facilities, theaters, bridges and highway sections that are now slowly falling apart.

EU money -- with which things could be built, researched, taught -- is not accessed because the national, provincial, communal, environmental, economic and social authorities often cannot agree who is to do what where and how with the money. As a result, Pompeii, a designated World Heritage Site, is crumbling even though Brussels had declared itself willing to provide about €80 million for its upkeep.

And when EU money does flow, things often take a strange course. Take for example the €7 billion training project, half financed by Brussels' social fund, that was meant to help young Italians find jobs. A study found that, although several thousand courses were taught, only 233 people ultimately found a job as a result. This means that every job cost about €30 million.

In the Mezzogiorno, the country's impoverished south -- which has seen an influx of €4,000 from Brussels per person over the past seven years -- EU money is trickling away almost without a trace. Adriano Giannola, the president of an organization for economic development, sees the "prettying up of a square here, a restauration there, usually of poor quality." People are using the money only to provide a bit of work to their voters, their friends, their business partners. He says he has not seen any projects that truly foster growth.

The state in Italy is not the solution, but part of the problem. Because the state doesn't work very well, work is becoming an increasingly rare commodity.

Why does a civil or business lawsuit take an average of 2,992 days in Italy, while 900 days suffice in Germany? Why do private citizens and entrepreneurs need to deal with about one hundred new tax laws every year -- the statistical equivalent of two new laws per week? Why is the state refusing to pay the over €75 billion in outstanding bills from deliverers and contractors, thus pushing many people into ruin? Why are 16,000 administrators and 12,000 inspectors receiving regal salaries to lead thousands of publically-owned companies, most of which have nothing to do with public services and only create deficits?

Italy's manufacturers' association has calculated that €13 billion could be saved in the public sector alone. One egregious example stems from the national tourism agency, which commissioned a project to globally showcase Italy's beauty by displaying seven photos around the world. After one and a half years, the seven photos were complete but because there wasn't enough money left for the planned TV and online ads or posters, no potential tourist ever saw them: The budget of €5 million had been entirely used to pay the salaries of the people involved.

To end, abolish, change all that -- that's what Prime Minister Renzi said he intended to do when he took power. He intended to "scrap" the old guard that controlled the state, remove the old cliques and fundamentally change the country from the ground up.

He started off forcefully, sending to the parliament a new election law and a constitutional amendment that would abolish the provinces and the second chambers of parliament. And a tax cut on top of that. He has charged his ministers with elaborating reforms in the education and health sectors, a modernization of labor law, the dismantling of bureaucracy and much more. Every month a reform, the slogan went. A few months ago.

But of this, little has been implemented. Most of it is stuck in parliament, in the cabinet or in party disputes. The Italians are used to it: About 250 bylaws of the Mario Monti government (November 2011 to April 2013) still haven't come into effect. But Renzi wanted to do everything differently, quickly and immediately. That's why he replaced his lame predecessor and fellow party member, Letta.

But he has begun talking about needing "one thousand days" for his work. The majority of Italians still support him, but his approval rating is rapidly crumbling from 69 percent in June to 54 in September. The philosopher and former mayor of Venice, Massimo Cacciari, is already talking about a disease that has afflicted Renzi: "Proclamationitis."