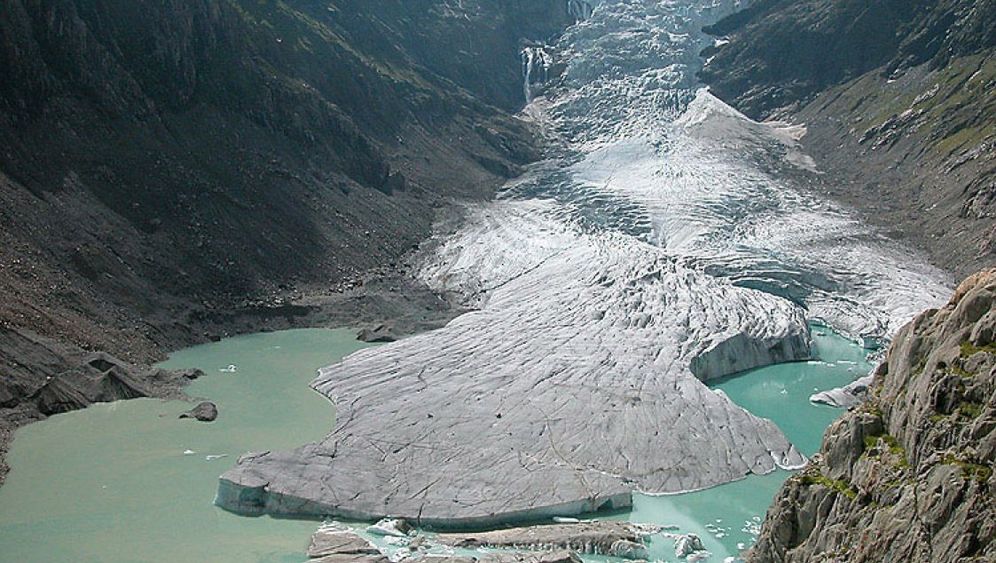 In the 1990s, the first cracks began to appear in the mighty tongue of the Trift Glacier in the central Swiss canton of Bern. In 2002, the peak of the ice mass burst into thousands of pieces. Since it lay in a hollow, the water swelled into a lake rather than flowing out. The Trift Lake then became an attraction: Hundreds of tourists per day now visit the suspension bridge that hangs over this new body of water. "Many more people come to the glacier than before," says Wilfried Haeberli of Zürich University.

The geographer and his colleagues calculate that, in the coming years, hundreds of such lakes will come into being in the Swiss Alps alone. In Austria, the Andes and other mountainous regions heavily affected by climate change, similar dramatic environmental transformations are occuring. "The rapid melting of glaciers is radically changing the Alpine landscape," Haeberli reported at the annual meeting of the European Geosciences Union (EGU) in Vienna. The ice region is in many places becoming a landscape of lakes.

New bodies of water would bring opportunities as well as risks. Tourists could take in something new, and reservoirs could supply hydroelectric power. Towns in these regions, however, see a looming danger: Avalanches threaten to tumble into the lakes, sending tidal waves that could be dozens of meters high surging down into the valley.

Haeberli and his colleagues estimate there will be 500 to 600 major lakes in the Swiss high mountain region "in the foreseeable future." With progressive global warming, three new bodies of water per year will emerge, according to their calculations.

The forecast is based on a computer model designed to show the ground underneath the glaciers. The way an ice mass moves and how it creases reveal the nature of the subsoil on which it is dwindling away.

Haeberli says his team tested the model on the changes in the landscape in the past decade. The digital animation shows which glaciers stand over hollows that will be exposed by the receding ice tongue in the coming years and could be filled with melt water. The resulting bodies of water will have an average depth of up to 100 meters (about 328 feet), estimates Haeberli -- that's deeper than Lake Ontario, Lake Michigan and the Chiemsee in Bavaria.

The first new additions have already arrived: While tourists are excited about the Rhone Glacier Lake in Valais, Switzerland, the young body of water is causing problems around the Grindelwald Glacier. Rock from the Eiger mountain that was once covered in ice began to fall away, and the resulting landslides have been causing melt water to build up since 2005. Thawing caused the lake to swell so much that it overflowed in late May 2008.

With this, it became clearer that floods could threaten railways, roads, hotels and campsites. Hundreds of millions of francs were spent to hurriedly bore tunnels into the mountain so that the water could flow out in any future emergency.

Particularly dangerous, say Haeberli and his colleagues, is the Aletsch, the largest glacier in the Alps. Underneath the ice are deep, gaping depressions that are soon likely to fill with water. Steep cliffs tower over the future lakes. Without ice to support them, Haeberli worries, the mountain could lose its hold and come crashing down into the water. Two towns would have to contend with potentially fatal tidal waves, says the researcher.

Residents of the valley of Plaine Morte, another glacier in the canton of Bern, also look with concern at a growing body of water fed from the thawing ice tongue. "We cannot just leave these new lakes to themselves," warns Haeberli. Pressure sensors on the ground and wires over the lakes should be installed to report dangerous swelling of the water in time, he suggests.

Some of these bodies of water, however, have the potential to lure tourists with attractive possibilities. The new lakes forming from a handful of glaciers in Switzerland -- Aletsch, Gorner, Otemma, Corbassière, Gauli and Plaine Morte -- have the capacity to be among the 20 largest reservoirs in the world, says Haeberli.

"The new lakes offer a chance to maintain current electricity production through hydropower," say Haeberli and his colleagues. Finally, in lower-lying areas, existing reservoirs are expected to disappear in a few decades due to dwindling melt-water rivers. Replacement is required.

The scientist is already anticipating a power plant that would feed off the new lakes forming from the Corbassière, Gauli and Trift glaciers. The plant could potentially produce 500 megawatts of electricity each year, which would be of great value to the Swiss. Haeberli estimates that about 40 new lakes could be interesting for energy production.

Perhaps, hopes the researcher, this will serve as consolation for the loss of the region's icy landscape.