At midnight, Lithuania's days without the euro came to an end. As the calendar flipped to 2015, the countdown clock hanging over the entrance to the country's central bank hit zero and fireworks shot into the air above the city palace in Vilnius. People celebrated in the streets and in the bars of the Lithuanian capital as a euro symbol was projected onto the facade of the city's neoclassical cathedral. Not long later, Prime Minister Algirdas Butkevicius withdrew a 10-euro note from a cash machine decorated especially for the occasion.

Lithuania is now the 19th member of the euro zone. The country's currency, the litas, is history, making way for the "euras," as the European common currency is known in the country.

In Greece, meanwhile, 2,000 kilometers (1,243 miles) to the south, a different kind of countdown is proceeding apace. In contrast to Lithuania, however, the days being counted could be the final ones in the country's participation in the euro zone. On Jan. 25, Greek voters will be heading to the polls for parliamentary elections. Should the leftist alliance Syriza win, as polls show it might, the euro could soon be history in the country.

Some five years after its outbreak, the euro crisis is returning to its geographic starting point. Once again, Greece is providing the stage for a conflict that is much more significant than the country itself. And once again, the North-South conflict's focus is the German-designed austerity and reform program that all crisis countries have had to adopt in order to become eligible for billions in bailout money from EU funds.

Core to the dispute remains the question as to what carries more weight: The Greeks' democratic will to leave behind austerity and cuts? Or the laws of the financial markets -- which would cease granting credit to Athens should it leave austerity behind -- combined with the unwillingness of other euro-zone member states to once again provide taxpayer money to bail Greece out?

As has so often been the case, European eyes are now on German Chancellor Angela Merkel. Until the middle of 2012, Greece's exit from the euro zone was seen as a possibility, if a risky one. But then, the chancellor fundamentally reconsidered her position on Greece, as she later told a small group of journalists, and made her decision: To save the euro in its entirety, Greece would have to remain in the common currency zone. There was, she said, "no alternative."

Things have changed and an alternative has in fact emerged: the cold shoulder. Furthermore, Merkel appears to be ready to show it to the Greeks. Should Syriza leader Alexis Tsipras become Greek prime minister and seek another debt haircut for his country while slowing down the reform process, a so-called "Grexit" from the euro zone would be the almost unavoidable consequence. Tsipras has made a number of expensive campaign promises in recent months, totaling over €10 billion ($11.95 billion). It is money that Greece doesn't have and which the markets likely aren't willing to make available.

In contrast to 2012, a year in which Greeks had to vote in two elections in order to establish a stable government, the prospect of a renewed crisis in Greece no longer triggers panic in Brussels, Berlin and other European capitals. Weariness and annoyance have become the dominant emotions. "Not Greece again," groaned a leading Finance Ministry official last week after reviewing the situation with his colleagues in a telephone conference. The scenarios being reviewed in Berlin these days, however, are different, with officials calmly looking at ways that Greece could remain a member of the EU while leaving the common currency zone behind. EU treaties currently only provide for the exit from the Union as a whole. But German government officials are tranquil, with one saying: "Resourceful lawyers will find a way." Tsipras, the official said, has little leverage.

One reason for the equanimity in Berlin is the market reaction to news of the new elections in Athens. When the vote was announced, the euro course remained remarkably stable and stock markets in Frankfurt, London and Paris flinched only briefly. Chancellor Merkel and Finance Minister Wolfgang Schäuble are likewise no longer afraid that a Grexit could result in the collapse of the entire euro zone. Both are confident that the common currency of today is better able to weather such a scenario than it was a few years ago.

Several changes to the currency union have been made since the peak of the crisis in 2012. First and foremost, the risk of other countries being negatively affected has largely disappeared, with Portugal and Ireland -- both countries which required assistance soon after Greece did -- now being seen as rehabilitated. Cyprus, too, looks to be on the right track, with the island nation's oversized financial industry having been shrunk and bank stakeholders having been made liable for losses.

Furthermore, the European Stability Mechanism (ESM), the currency zone's permanent backstop fund, remains ready to bail out member states that run into turbulence. And the stability of large European credit institutes, Berlin officials are confident, is guaranteed by the European banking union. Taxpayers, officials say, would only have to become involved in an absolute worst case scenario -- and large, privately owned banks have largely divested themselves of involvement in Greece.

The result is that officials in Berlin and Brussels no longer subscribe to the so-called "domino theory," which held that a Greek collapse would be followed by others. It has been replaced by the "chain theory," which holds that the entire chain would become stronger were its weakest link to be eliminated. Indeed, Berlin officials fear that giving in to a new, leftist government in Athens would further call into question controversial austerity and reform policies -- an eventuality that would be welcome in France and Italy, countries where reform has not been welcomed with open arms. "In addition, we would destabilize the domestic political situation in these countries," one euro expert within the German government warns. Were a new anti-reform or anti-EU government in Greece to prevail against the EU majority, it could strengthen radical parties such as the Front National in France, Podemos in Spain or Beppe Grillo's Five Star Movement in Italy, the expert says. "A strong commitment to Europe and broad support among the Greek voters and political leaders for the necessary growth-friendly reform process will be essential for Greece to thrive again within the euro area," said Pierre Moscovici, commissioner for economic and financial affairs, at the end of December.

The country has indeed made progress. The economy is growing once again, the vital tourism industry had one of its best years ever in 2014 and the Greek budget is in surplus once it is adjusted for interest and debt payments.

But the EU's insistence on Greece's ongoing adherence to broad reforms calls to mind Chancellor Merkel's comments regarding "market-conform democracy." She coined the term in 2011 in comments urging German parliament to quickly approve bailout loans as a way of impressing investors and preventing them from speculating on the break-up of the euro zone. The comments, though, were heavily criticized and interpreted as being democracy's surrender to the pressures of international capital markets. The Greek campaign has breathed new life into that debate. To what degree should the EU stand by a Greek electorate that would like to remain part of the common currency -- but which is not prepared to do what it takes to be able to borrow money from international capital markets?

The Merkel administration is not at all fond of the debate, partly because its approach to Athens is under the microscope in Berlin. Chancellor Merkel and Finance Minister Schäuble are not prepared to make significant concessions to Athens primarily because such concessions have already been made. Greece has been allowed more time to pay down its debt than originally agreed and interest payments have been largely discontinued. Furthermore, the troika -- made up of the European Central Bank, the International Monetary Fund and the European Union -- has set the interest rate on the total Greek debt at 2.4 percent whereas Germany must pay an average of 2.7 percent. The situation is such that it would be difficult to find a majority in the German parliament for concessions to Greece.

Furthermore, the anti-euro party Alternative for Germany (AfD) would be almost certain to profit. Indeed, it is already doing all it can to benefit from new elections in Greece. "The current state crisis in Greece finally offers the country the possibility to pull the emergency brake and exit the euro zone," says party leader Bernd Lucke. "That should trigger a change of course from Ms. Merkel." The oft-claimed success of efforts to save the euro, Lucke continues, is a "fairy tale." "Currently, the majority of the Greek people strictly reject the austerity measures and policies being demanded of their country." He says that the Greeks could have been spared much suffering "had the AfD demand to allow Greece to leave the euro zone been followed earlier."

Nevertheless, a Grexit would be anything but cheap. Technically, such an exit would become reality were, for example, the ECB to refuse to supply more money to Greek banks due to insufficient reserves or were Athens to no longer receive sufficient money from the bailout fund or from capital markets to cover expenses. In such a situation, the government would be forced to print its own currency, the new drachma. But Greece's euro debts would remain. Some 80 percent of those debts are held by the ESM, the ECB, the IMF and individual partners in Europe. Were Greece to introduce a new -- and devalued -- currency, it seems unlikely that Athens would be able to service or pay down those debts. The result would be that creditors, Germany first and foremost, would be forced to write down their claims.

Indeed, the legendary investor George Soros has been warning for some time now that the European financial crisis has long since begun morphing into a political crisis. "Everyone knows that (Greece) can never pay back its debt," Soros told SPIEGEL in an interview at the end of 2013.

But because debt relief is not politically palatable, Soros believes the current situation is comparable with that which followed World War I. At the time, France contributed to the rise of Adolf Hitler with its insistence on astronomical reparations from Germany. "The Golden Dawn in Greece is a similar development," Soros said. The trend, he added, is clear: Toward populism and extremism. 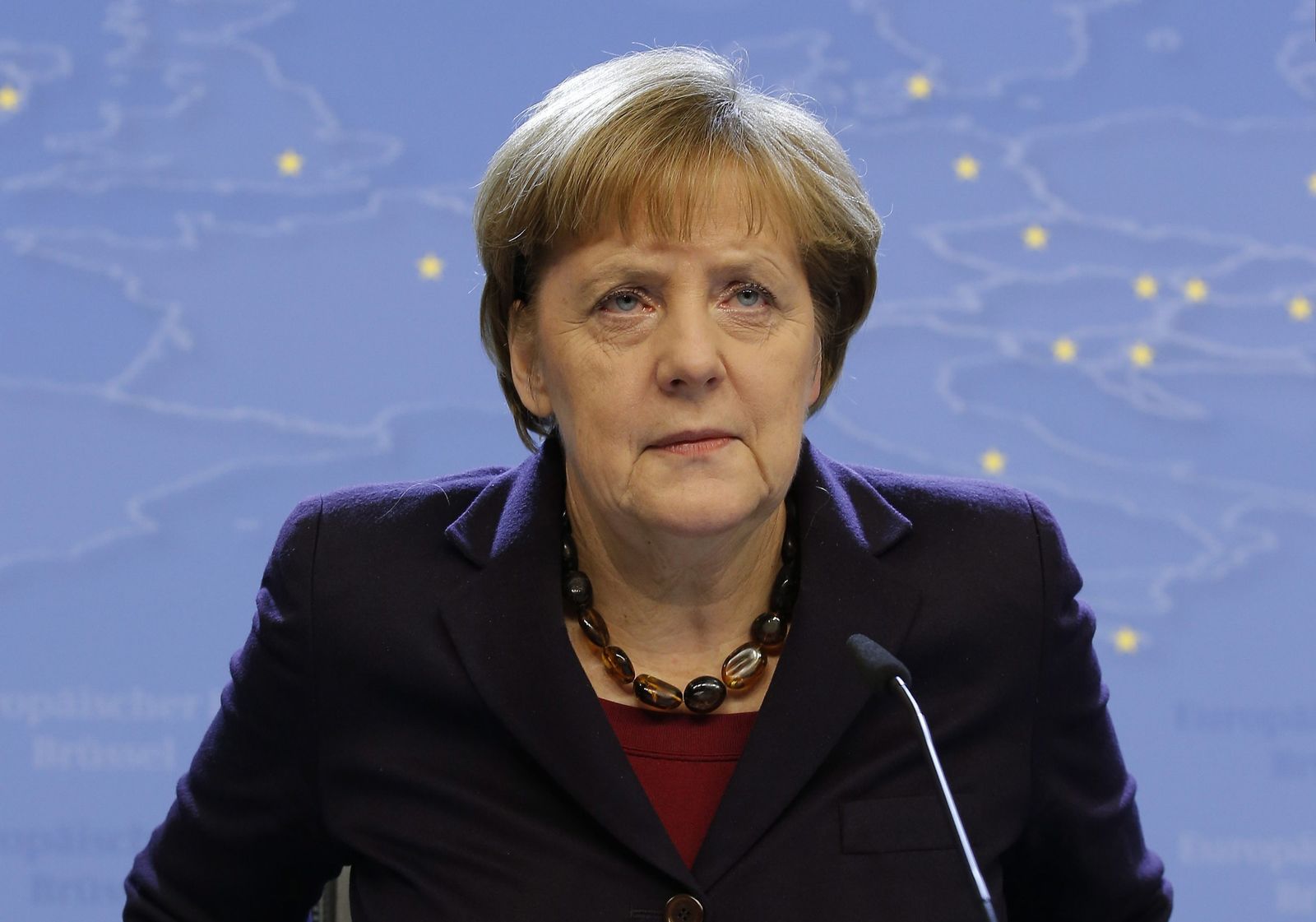 German Chancellor Angela Merkel used to worry about Greece's exit from the euro zone. She doesn't any longer.