The décor of the room in which the German chancellor hoped to convince the French president to support her favored candidate was telling: brown leather chairs, a lonely potted plant at the window, a bottle of mineral water and a thermos of coffee on the table. It was clearly more Chancellery than Élysée.

It was here, in one of the German delegation's rooms on the fourth floor of the new European Council building in Brussels, that Angela Merkel and Emmanuel Macron met on Tuesday afternoon before joining their counterparts for an informal EU dinner 45 minutes later. Merkel's spokesman posted a photo on Twitter in advance of the meeting: Angela Merkel and Emmanuel Macron, both smiling.

But appearances were deceiving. The relationship between Berlin and Paris is tenser than it has been in quite some time. Ever since Macron moved into the Élysée Palace two years ago, the German-French relationship has been a bit more heated. Macron wants to change Europe, but the Germans prefer to stall.

Berlin has rejected Macron's proposals to reform of the Eurozone and the two countries are fighting over armament projects and weapons exports. It was difficult to find a compromise on Brexit and common ground German-Russian Nord Stream 2 gas pipeline proved just as elusive.

And now, following European elections, the EU is now in the process of choosing new occupants for its top positions -- and additional tensions may be on the horizon. In the wrangling over those leadership positions, Paris and Berlin have conflicting interests. Macron wants to take advantage of the opportunity to remake the EU, as he has said in numerous speeches. To do so, he needs an energetic European Commission president who shares his aims.

Merkel, meanwhile, must support Manfred Weber, the German lead candidate for the European People's Party (EPP), the center-right European Parliament group to which Merkel's Christian Democrats (CDU) belong. She has little choice in the matter, particularly given that her party already suspects her of having left them in the lurch during the campaign. Ever since Merkel gave up her position as the chairperson of the CDU and announced her impending retirement from politics, she has become a lame duck. To prevent her power from crumbling further, the chancellor needs to prove she can still represent German interests in Brussels. She needs to prevent a commission president from being selected whom the Germans do not like.

Macron, meanwhile, has joined forces with the European liberals and hopes to form an alliance -- ideally with the Greens -- to finally end the dominance of the big blocs in EU politics, the center-right conservatives and the center-left Social Democrats. He rejects the very concept of the lead candidate. More than that, though, he is opposed to the man for whom Merkel has to fight: Manfred Weber, of the Christian Social Union (CSU), the Bavarian sister party of Merkel's CDU.

And so they stand opposed: a frustrated French president, disappointed by the timidity and worries of the Germans, determined if necessary to move Europe forward with help of other partners. And an outgoing chancellor, who wants to remain the most powerful woman in Europe to the end. Merkel and Macron spent an hour and a half on the phone the evening the European elections ended, but so far there are no signs that they are approaching agreement on top European jobs.

When Macron says the word "spitzenkandidat," German for lead candidate, it's clear how little he thinks of the concept. He rushes through the long German word, putting the stress on the third syllable and making it sound pointed, almost like barbed wire in the middle of the French surrounding it.

After the meal with the heads of state and government, Macron explained for the umpteenth time how little he thinks of this selection process according to which only someone who campaigned as lead candidate in the elections can become commission president. Weeks ago, he was already insisting that there is no legal foundation for the process. Now, with the election now over, he sees it as anachronistic, mirroring as it does the old power structures characterized by the dominance of the erstwhile big-tent parties.

"These elections mark a turning point for Europe," Macron said in Brussels. For the first time since 1979, the two largest parties might not be able to form a majority, he said. "So we cannot simply continue as we are used to doing."

Macron had just experienced the opposition to his point of view during dinner, when Merkel -- over pork filet, asparagus and green beans -- clearly threw her support behind Weber. It was a tense discussion, and mobile phone reception was even blocked.

Merkel contradicted Macron's argument that Weber didn't have the necessary experience. It was something people had said about her, she recalled, when she took office 14 years ago. The evening ended with a temporary victory by the chancellor. Then on Tuesday, Merkel parried attempts by the French and others to finalize a set of firm criteria for the future commission president.

Merkel, of course, like Macron, has never been a fan of the lead candidate system. She does, though, see Weber is an acceptable candidate. She is accustomed to much worse from the CSU. More than anything , though, the chancellor knows that the CDU and the CSU back home are expecting her to get Weber through in Brussels. As a result, she finds the stubborn opposition from Macron and others to be unsettling.

From the German perspective, Macron's combativeness violates an unwritten EU rule. EU leaders know the expectations that each are facing from their own country; they all know the constraints firsthand. For that reason, they generally try not to make compromise more difficult by making statements in public.

But that's exactly what Macron is doing. He has heaped pressure on the chancellor and made the leadership issue into a power struggle. Now Merkel is defending Weber in part because she doesn't particularly like Macron's approach.

Macron is the fourth French president with whom Merkel has had to work during her chancellorship. To understand the fidgety Nicolas Sarkozy, she allegedly watched Louis de Funès films. François Hollande, meanwhile, blended into the woodwork next to the chancellor. But Macron stands up to her. He wants to shape Europe, and is threatening her position as the unquestioned top dog in Europe.

Merkel knows that there could be a point at which she might have to give up on Weber. She seemed to lay the groundwork for this on Tuesday evening when she argued that the EU needs to remain functional and believes that the situation can't be allowed to become so contentious that the EU becomes blocked. She issued a warning at the summit that the leaders should "interact with one another carefully."

But Brussels diplomats fear that Macron is determined to use the admonishment as a sign of weakness, and to celebrate Merkel's defeat as a victory. Berlin is making it correspondingly clear to Paris that Macron shouldn't hope to place a French person in one of the top jobs if Merkel isn't able to bring in a German.

Macron's preferred alternative to Weber is either Brexit negotiator Michel Barnier or liberal Dane Margrethe Vestager. Barnier is, like Weber, a member of the EPP, which is still the strongest single group in parliament. And he is French.

But that is precisely the problem. The CDU -- the Germans, in other words -- are said to be especially opposed to Barnier. "Definitely no Frenchman," was the stance in Berlin, according to a leading European conservative. One observer described the negotiations as a "nasty relapse into nationalism" of the kind that many had hoped belonged to the past.

It's a danger that Paris also sees: "This is first and foremost about substance, not about nationalities. The position of the head of the Commission is not a battle for a national flag," argued Amélie de Montchalin, the state secretary for European affairs in the French Foreign Ministry. "This is not about a conflict between France and Germany, that has nothing to do with this."

The defeat of Merkel's CDU in the European elections and the self-destruction of her coalition partner in Berlin, the Social Democrats, threatens to throw her government into crisis. But Macron came to Brussels strengthened. Although his party La République en marche! only came in second behind Marine le Pen's Rassemblement National, the gap separating them from the right-wing populists was much smaller, at 0.9 percent, than had been feared.

More than anything, though, La République en marche! believes the election confirmed its position as a new political power in the country. The old-school French Republicans, Merkel's allies in the EPP, received 8.5 percent, an historic low. The Socialists received just over 6 percent. For En Marche, the election confirmed that they have irreversibly changed the French political landscape. That also has consequences for Brussels. Why, En marche argues, should the French trust Weber, a representative of the traditional center-right to lead European politics?

The conflict over the leadership post, to be sure, is just one of many conflicts paralyzing the German-French relationship. Increasingly, Paris and Berlin are supporting conflicting positions in Brussels. It is, as diplomats from smaller countries openly admit, a dangerous development.

The council's Polish president Donald Tusk said as much behind closed doors on Tuesday during dinner. Smaller EU member states, he said, don't particularly like it when the German-French motor is running smoothly since that means they don't have much influence. These days, though, he said, they are all hoping that Paris and Berlin could once again find agreement. 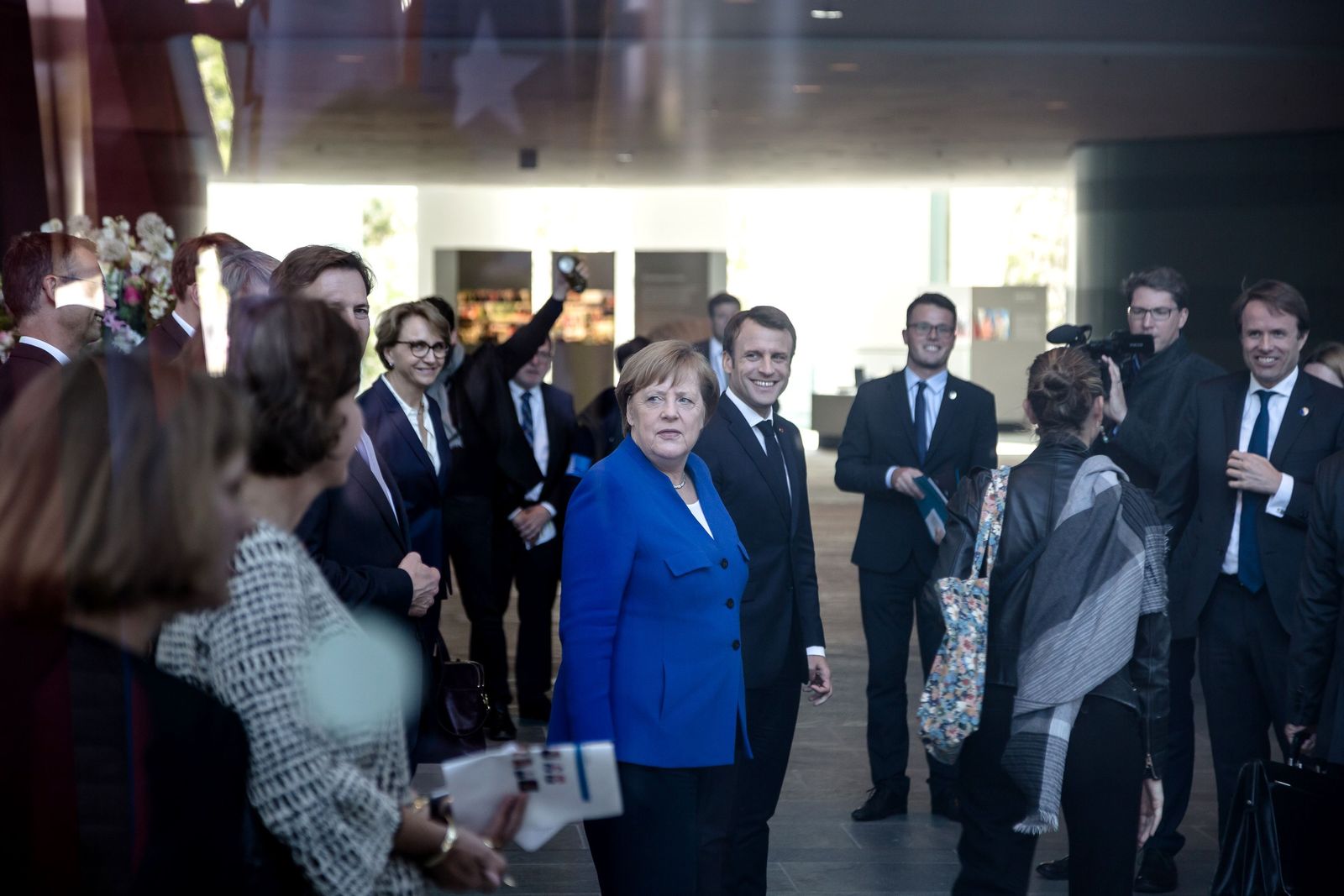