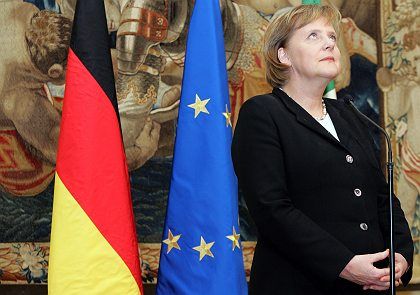 German Chancellor and EU President Angela Merkel has a vision for the future of the 27-member bloc.

What to give someone for their 50th birthday? A nice silk tie perhaps? Maybe a gift certificate to a nice restaurant. A romantic weekend get-away with their spouse?

Or how about an army? That, at least, is what German Chancellor Angela Merkel wished for the European Union this week as the 27-member club prepares to celebrate a half century of unity on Sunday. In a Friday interview with the mass-circulation German tabloid Bild Zeitung, Merkel envisions Europe growing even closer together and more transparent. She also wants a Europe with its own fighting force.

"In the European Union we have to come closer to the creation of a European army," she said when asked about the future of the continent. But she stopped short of putting a so-called "United States of Europe" on the wish list. "Even in another 50 years there won't be a federal Europe," she said. "We will maintain the current diversity of nation states."

The idea of a European military force is not a new one. Indeed, the EU has been attempting to intensify its cooperation on foreign policy for years. The EU constitution, which was torpedoed by France and the Netherlands in the spring of 2005, had envisioned creating the office of a European Minister for Foreign Affairs, and in autumn of 2006, Europe sent an EU force to help provide security for elections in the Democratic Republic of Congo. Still, the idea of European countries sending troops abroad as part of an EU force remains a controversial one.

Merkel, though, spent most of the interview talking about what Europe has accomplished in its first 50 years rather than looking forward to the next 50. She stressed that Western Europe is currently experiencing its longest-ever period of peace and emphasized that the EU has resulted in rising affluence for the entire continent.

"We can be proud of the fact that the gap between the poor and the rich in Europe has not become as wide as it has in other parts of the world," she said. Europe should also be proud that it offers "freedom, the rule of law, and security for almost 500 million people in Europe. Who would have predicted that, 50 years ago?"

The European Union will celebrate the 50th anniversary of the signing of the Treaty of Rome on Sunday in Berlin. Government leaders from the 27 member states will sign the "Berlin Declaration" -- a document intended to not only celebrate the unique alliance but also try to point the way ahead. Merkel, for example, has said that she would like the stagnated EU constitution ratified by all countries by 2009. Mostly though, the declaration will serve to remind people of the bloc's achievements in promoting peace, democracy, stability and prosperity in a continent decimated by wars and violence in the 19th and 20th centuries.

Former German chancellor Helmut Kohl likewise spoke with Bild Zeitung on Friday about the European Union. The father of German reunification emphasized how important the EU was for the rebirth of Germany after the catastrophe of World War II and also for the later coming together of East and West Germany in 1990.