Angela Merkel is heading back to Rome. Once again, she will be driven in a speeding car bathed in blue police lights as she is escorted from the airport to Villa Madama, the fresco-covered 16th-century country estate that is used by the Italian government. The German chancellor arrives Wednesday for her next appointment in the Italian capital. German-Italian government consultations are planned, and the chancellor will be joined by five ministers in her cabinet.

From the outside, it will appear to be business as usual. Only 12 days ago, Merkel attended a four-person mini-summit here with French President François Hollande, Spanish Prime Minister Mariano Rajoy and, of course, Italian Prime Minister Mario Monti. At the time, things were still in order in Merkel's world. As usual, her counterparts had asked for a number of things and the German chancellor, as she is known to do, said no to the things she didn't want. But she nevertheless granted the growth pact her colleagues had been so adamantly demanding. That was it. Mission accomplished.

Then, suddenly, things changed. The omnipotent Germans lost twice against Italy -- first on the football pitch during the Euro 2012 semi-final in Warsaw and then at the European Union summit in Brussels on the same evening. They were developments that somehow made the Germans look smaller and the Southern European countries a lot bigger. Now, three heroes are celebrating these developments, and all are named Mario: Mario Balotelli, the Italian footballer who scored two goals against the German national football team; Mario Monti, who prevailed over the "iron chancellor" in the political arena; and Mario Draghi, the president of the European Central Bank (ECB), who helped behind the scenes with his expertise and authority.

There were too many coincidences for this to be a coincidence, superstitious Italians have murmured. Fate, they argue, is once again on their side.

The country had been relegated to the sidelines for years, Italy's conservative daily Corriere della Sera wrote in an editorial, but "that night we returned to our role as an important actor in Europe." "Super Mario won," cheered the left-leaning La Repubblica. But the paper also noted that "la Merkel hadn't lost" either. The sentiment in the leading media has also spread to the people, who share the view that Italy has finally regained its former strength and that this is a blessing for all of Europe -- even for Germany, meaning gloating is not appropriate.

And what of the apparently hated Merkel? Many believe she was just trying to defend German interests, just as any good politician would do. Besides, some say, she also made the European crisis countries aware of weaknesses they probably would have preferred to have suppressed. Only two newspapers within former Prime Minister Silvio Berlusconi's media empire attacked the German chancellor with unflattering caricatures and salacious slogans. However, the broad majority of Italians, including many Berlusconi supporters, find those kinds of displays embarrassing.

Until last week's double victory, a growing number of Italians had found the chancellor to be increasingly unbearable. But after their losses at the Euro 2012 championship and the EU summit in Brussels, Germany and other Northern European countries are now coming across as smaller and more human in the eyes of people living in Southern Europe. Through the losses, the northerners seem less omnipotent and also a little more likable.

Personal relations between the key political players were and remain good, and it is likely they will remain that way. After the dramatic EU summit, Monti said he and Merkel shared "mutual sympathy" for each other, and he assured Italian President Giorgio Napolitano that those sympathies remained. In an interview with Germany's Frankfurter Allgemeine Zeitung published on Wednesday in time for his meeting with the chancellor, the Italian prime minister disputed notions there were any deep-seated differences between the leaders. "Angela plus Mario is tantamount to a step forward for European economic policy," Monti said.

In the interview, Monti sought to counter the impression that he and the chancellor have any major differences. He said Italy always called for more growth, but not "at the cost of fiscal discipline." At last week's EU summit, he said, he had helped to ensure "growth and financial stability" in Europe.

The greeting that he gives Merkel at Villa Madama on Wednesday afternoon is therefore likely to be a cordial one. Of course, the discussions that follow will be complicated. It's not just moods and feelings that have shifted in recent days. The political playing field has also changed practically overnight -- for Monti, for Merkel and for all of Europe.

The End of a 'Merkozy'-Dominated Europe

Prior to Monti's victory in Brussels, La Repubblica wrote that the "vultures are already circling" over the prime minister's headquarters, Palazzo Chigi. Berlusconi, who is still the leader of the majority group in parliament, had publicly threatened to topple Monti. For now, Monti appears to be safe, and Berlusconi will have to go back to his sulking. It also secures a role for Monti as a serious actor on the European stage who must be taken seriously.

For the foreseeable future, the European Union will no longer be dominated by Germany and France -- and the era of "Merkozy" is over. The Franco-German duo has been replaced by a club of four, with Italy and Spain suddenly sharing a place with Germany and France at the helm of the EU. With Hollande unwilling to back Merkel's policies the way Sarkozy did, France is now clearly in the Southern European camp as well.

The result -- as was evident during the long summit night in Brussels last week -- is a significant shift in Europe's political course. Radical austerity policies as prescribed by Berlin are out. According to the new line, growth will be fuelled again using government contracts and subsidies. At the same time, though, Europe doesn't want to stray from the path of virtue when it comes to frugality. It remains to be seen whether this balancing act can succeed. Merkel will certainly make her reservations clear to Monti.

The chancellor is also likely to share some things that will probably irritate the Italians. The reason is that celebration over the decisions taken in Brussels in the crisis-plagued Southern European countries has obscured the fact that much has been very vaguely formulated and that some decisive decisions still haven't been made. The repercussions are already being felt.

The Italians seem to have mutated into optimists almost overnight as a result of their recent victories, but the German chancellor may have another message for them: Neither Monti's brilliant summit success nor Balotelli's beautiful goals can solve Italy's economic problems.

For that to happen, the country will need to undertake a number of radical steps to modernize its encrusted economy -- steps that will be painful for many. Otherwise, the economic decline will continue. The latest figures for automobile sales in Italy for June are just one example: They have fallen by 24 percent. It seems that the recession is picking up speed. 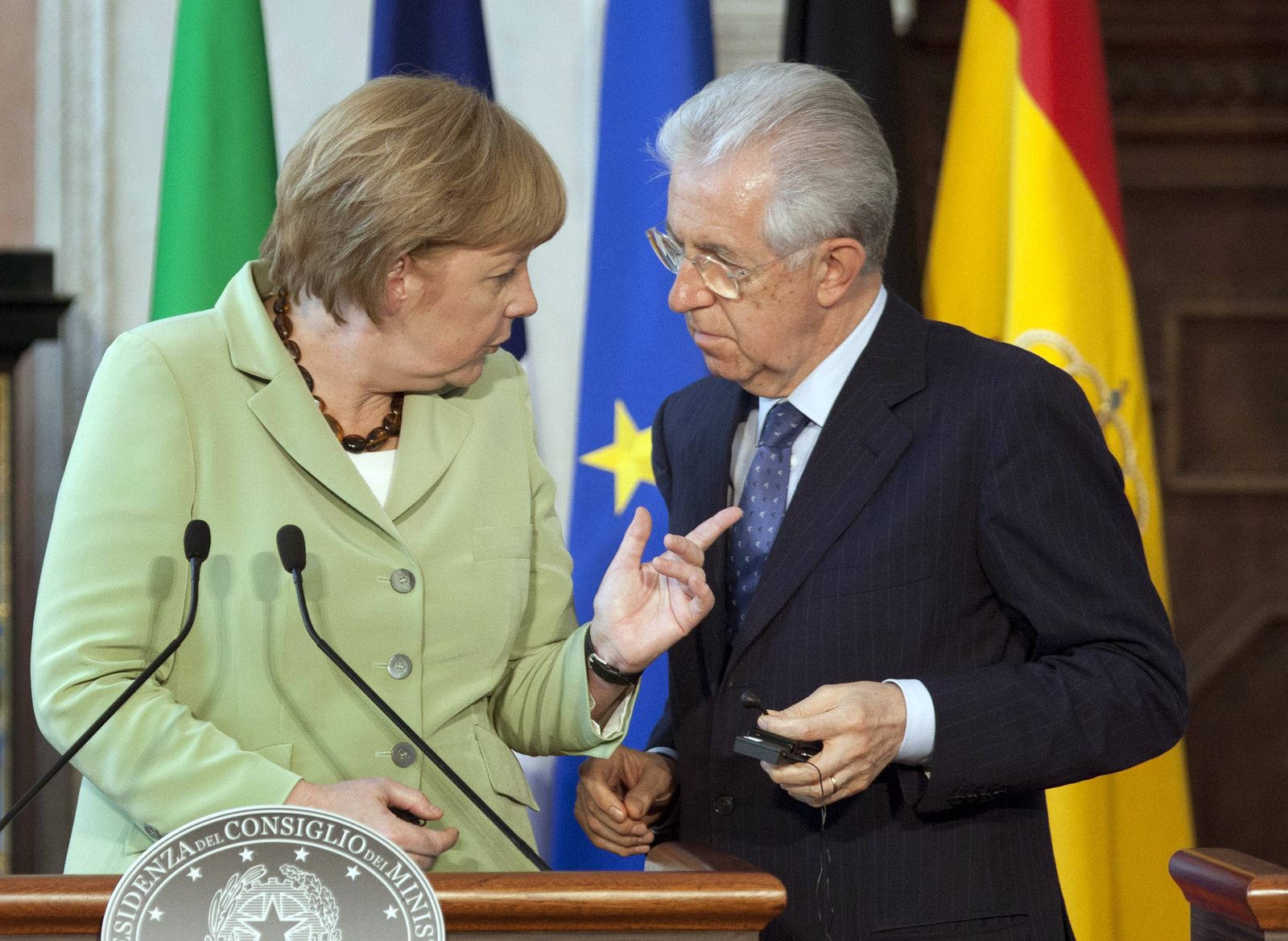