There could be a few embarrassing moments when François Hollande and Angela Merkel meet for the first time at the Chancellery in Berlin on Tuesday night. Although the two have come across as adversaries in recent months, from now on, their future will be pegged to one another.

Never before has a new relationship between German and French leaders been as strained as this one. Both the chancellor and the new president have contributed to that atmosphere. Merkel refused to meet with Hollande during the election campaign and often presented herself as a supporter of losing candidate Nicolas Sarkozy. Meanwhile, Hollande campaigned against Merkel's European Union fiscal pact, her greatest European policy achievement to date.

When Hollande campaigned across France in recent weeks, it seemed at times he was acting as if he were going to liberate the Continent from Merkel. At the same time, though, close advisors to the Socialist Party candidate were telling the Germans that Hollande didn't really plan to renegotiate the fiscal pact. They said he would be satisfied with additional growth measures.

On the German side, these reassurances are being taken more seriously than the candidate's stump speeches. For some time now, officials within the Chancellery have felt there would also be positive aspects if the Socialist candidate beat Sarkozy.

Personal dealings with Hollande, for example, might be easier than they were with his predecessor. He's considered a pragmatic and amiable politician who seeks compromises. Merkel also believes that Hollande could help to improve Germany's image in Europe. She worries about the vehemently anti-German reactions in many European countries that are suffering under austerity measures. In that sense it could suit her well if Hollande were able to claim that he convinced the Germans to soften their position.

It has only been since Hollande's election on Sunday a week ago that staff for both the president-elect and the chancellor have begun speaking directly to each other. In the days since, they have been intensively preparing for the leaders' first meeting. On Friday, Merkel's spokesman Steffen Seibert said the goal of the meeting would solely be for the two to get acquainted with each other and that no decisions would be made.

Merkel has made clear to Holland that she has drawn a red line that the chancellor will not allow to be crossed: The fiscal pact cannot be weakened. She is expected to insist on this during the very first meeting. This is not only because she believes that the savings policies are correct, but also because she fears that if she gives way, she will suffer domestic political damage. In June, Germany's parliament, the Bundestag, is expected to vote on the implementation of the European Stability Mechanism, the permanent euro rescue fund that is supposed to go into effect in July. Merkel is concerned that support for the ESM might erode within her governing coalition if she yields to Hollande.

Merkel is already prepared to agree to complement the fiscal pact with a growth component. This would allow Hollande to explain to voters that he was able to prevail with his demand for an end to strict austerity policies. The measures planned include allowing EU structural funds to be used to invest in new projects.

Hollande can already claim victory on one point. Merkel has no fundamental objections to a plan to increase capital at the European Investment Bank, the EU's investment arm, by €10 billion ($12.86 billion), a move that would increase its lending capacity to €60 billion.

The project bonds that Hollande is proposing to finance major infrastructure projects, for example, could also become a reality. Merkel is prepared in principle to agree to the project bonds -- as long as they don't cost Germany anything.

And although Hollande has ranted against "austerity," he has also spoken out in favor of a balanced budget. In view of his expensive campaign promises, though, it remains a mystery to many in the German government how he intends to do that.

In order to brighten up the mood in German-French relations, Merkel is also expected to oblige Paris on another point. Hollande is planning a major gesture for the 50th anniversary of the Elysée Treaty next year -- he wants to draft a new version of the document that provides the basis for relations between Paris and Berlin. Germany's Foreign Ministry has signalled to the French that officials there are prepared to discuss the symbolic act. 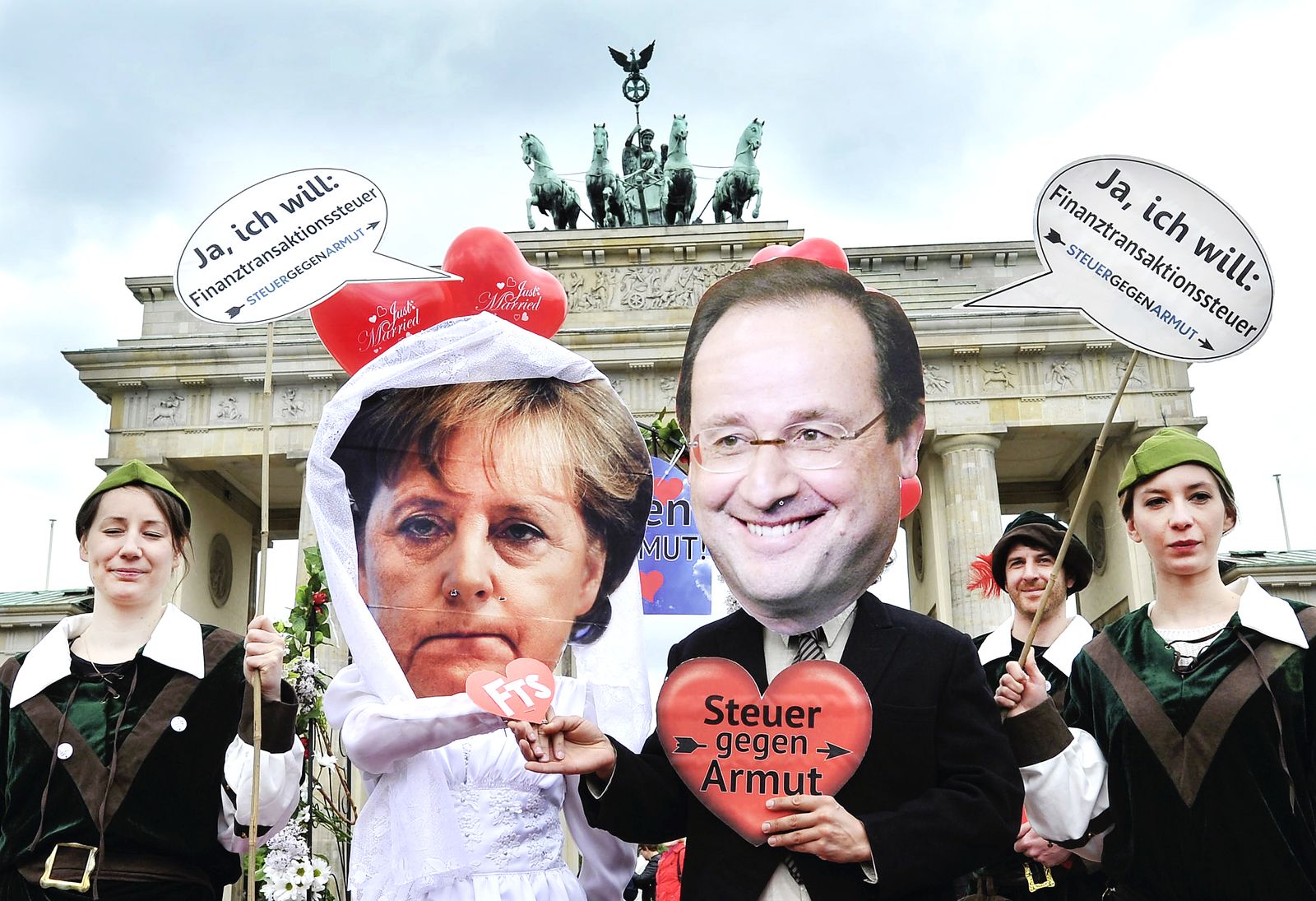 Demonstrators stage a mock wedding in Berlin on May 7th at Berlin's Brandenburg Gate: Never before have new German-French relations been as strained.