The mood was not a good one when Christian Democratic parliamentarians from the state of North Rhine-Westphalia met in Berlin last Monday evening. Normally, such gatherings focus on agreeing on a common line ahead of votes in the Bundestag, Germany's parliament. But this time, the deputies needed to vent. Angela Merkel's grand coalition, which pairs her CDU with the Social Democrats, has been in office since last autumn. And many lawmakers within the chancellor's party are tired of the SPD presenting itself as the driving force in the government.

"We have to avoid the impression that the SPD is governing and that we, as election victor, are happy to be a part of the government," complained Wolfgang Bosback, a senior CDU member well known for his temper. A fellow parliamentarian, Jens Spahn, complained that two more issues -- pension reform and minimum wage -- could soon give the SPD even more opportunity to take center stage. "The only thing missing is if the German European Commission representative were to come from their party," Spahn says, referring to demands that SPD member Martin Schulz, outgoing president of European Parliament, become a member of the Commission. "If Schulz becomes commissioner, it would contradict two election results -- those in Germany and those in Europe."

The fight over who will become the next Commission president has reached Berlin. And that means that an issue that was already one of the most complicated that Merkel has ever faced has become even more so. The number of contradictory interests is unusually large. She wants to keep Britain in the European Union, she doesn't want to antagonize the SPD, she doesn't want to anger people within her own party and she doesn't want to be seen as the one who ignored the election result and prevented election victor Jean-Claude Juncker from taking what many see as his rightful position as Commission president. Economists call such a situation "lose-lose." Novelist Joseph Heller called it a "catch-22." For Merkel, it is a serious political problem.

During the depth of the euro crisis, Merkel was able to rely on the SPD. But this time, she can't. The SPD, together with other Social Democratic parties in Europe, are intent on installing their lead candidate Schulz as deputy head of the Commission, meaning he would have to become Germany's representative on the EU's executive body. Juncker, who needs SPD support in European Parliament to become Commission president, has agreed to the move. Should Merkel decline to support Schulz as Germany's Commission representative, the SPD would withdraw its support for Juncker and the entire deal would fall apart.

For German conservatives, however, Schulz represents the worst of the SPD's tax-and-spend mentality. During the European election campaign, they said he "seems like an Italian" -- implying that he wants to abandon austerity, the main pillar of Merkel's euro-crisis policy. "It is out of the question that Schulz will be Germany's representative on the Commission. The SPD has enough cabinet posts for a party that won just 25 percent in German elections," says Hans-Peter Friedrich, the conservatives' deputy floor leader in Berlin.

Plus, Merkel's party doesn't want to allow European Parliament to dictate who will become Germany's commissioner. There is "no legal foundation" for such a procedure, they say.

The chancellor agrees and wants to block Schulz as well. Indeed, it is part of a much more expansive plan which she hopes will convince Britain to remain in the EU. And one that could leave Juncker on the outside looking in.

She believes that the SPD is not prepared to allow Germany's governing coalition to collapse because of a dispute over Martin Schulz's next job. Merkel, SPD head Sigmar Gabriel and Horst Seehofer, chairman of the Bavarian sister party to Merkel's CDU, the Christian Social Union, met on the Monday evening after EU elections to discuss the situation. One of the issues addressed was that of the German representative on the Commission. The tone was businesslike and the trio was only interrupted once, when Merkel had to speak with US President Barack Obama on the telephone.

Gabriel didn't openly demand that Schulz be named to the post, but Merkel and Seehofer were both able to read between the lines of his comments. Merkel, for her part, didn't reject Schulz outright, but she made it clear that she wasn't particularly enthusiastic. She also reminded Gabriel that the CDU received substantially more votes in the European election than the SPD did -- even without adding in the votes received by the CSU in Bavaria. With such a result, it would be "very difficult" to convince German conservatives that an SPD man should be named Germany's representative on the Commission.

Gabriel, of course, knows that as well. "The stage is Brussels," he said during a telephone conference with SPD leaders last Monday and said: "Let's focus on Juncker and avoid mentioning Schulz's name at all for now."

Schulz himself is also aware of the fragile political situation in Germany and has developed a Plan B. Before the election, SPD party heads and government leaders from around Europe promised to support him as the center-left's lead candidate. He has also positioned himself to be named floor leader for the Social Democrats and Socialists in European Parliament in mid-June. More importantly, he will lead the center-left in negotiations with the conservatives, talks that will focus on issues European Parliament will address in the next five years as well as important posts. As such, Juncker's interest in keeping Schulz in the running for the Commission job is great.

Merkel, though, believes that this is the weak link in their strategy. And it will be here, despite all of her public expressions of support for Juncker, that she will focus her energies.

Specifically, she intends to argue that, faced with anger within her own party, she has little choice but to prevent Schulz from becoming Germany's commissioner. Plus, SPD leader (and German vice chancellor) Gabriel has made it clear that he does not intend to allow Merkel's government to collapse over the issue. And, if Social Democratic support for Juncker begins to splinter across Europe -- at least according to Merkel's strategy -- then Juncker will realize that his own chances to become president of the Commission are dwindling. And he will withdraw.

A high-ranking advisor to European Council President Herman Van Rompuy, who is currently speaking to heads of government across Europe about the situation, confirms the scenario. "I presume that Juncker will withdraw from the race himself, should criticism of his person continue as it has," he says. That would clear the way for a compromise candidate. Whether European Parliament, which is more self-confident than ever before, would approve such a candidate is an open question. Particularly given the fact that no serious names have emerged.

In short, Merkel's calculation is one with an unusual number of variables and only one constant: The British should remain in the EU. Merkel sees the bickering over Juncker as a tricky political challenge but believes that a break between the EU and Britain would be a historical failure.

Merkel made the distinction clear last Wednesday in German parliament. She uttered two or three sentences focused on her support for Juncker -- and followed it up with a long, passionate speech on Britain's importance to Europe. The "nonchalant way" that some have spoken of a possible British secession is "extremely negligent," she said. The question as to whether the British stay is anything but unimportant, she said. Foreign Minister Frank-Walter Steinmeier (a senior member of the SPD) echoed the sentiment: "Great Britain is a strong partner of Germany's and makes a decisive contribution to Europe's joint foreign policy and, as such, to the defense of European interests in the world." Germany's government, he said, has made it a goal to "cooperate more closely on foreign policy."

And despite her frustration with the role Britain has played in several past EU debates, Merkel values Britain's influence on the 28-member bloc. The similarities between Berlin's and London's positions become clear in a confidential German government paper on the tasks facing the next Commission. "Growth and competitiveness" should take precedence, the paper reads. "The potential of the European market and free trade" should be tapped to the fullest. The French, Spanish and Italians would not unconditionally sign off on such a focus at the moment. But British Prime Minister David Cameron surely would. The chancellor also knows that Britain's pro-market position in many debates allows her to focus on other areas, such as the EU budget, the banking union and the trans-Atlantic free-trade agreement.

Cameron seeks to reinforce his resistance at a mini-summit planned with Swedish Prime Minister Fredrik Reinfelt, Dutch leader Mark Rutte and Merkel south of Stockholm on Monday and Tuesday. He's hoping he can count on the Swedes, the Dutch and Hungary as well as Italian Prime Minister Matteo Renzi, who has been more openly criticizing Juncker in recent days. Should they join him, he would be within reach of achieving a blocking minority in the European Council, the body representing the leaders of the EU member states, against Juncker -- especially if he could get the Germans on board.

More than anything, it is expected that Cameron will make clear just how much pressure he is under. If Juncker succeeds in becoming Commission president, British observers and diplomats fear it will trigger a political earthquake in London. If he doesn't prevent Juncker's election, outcry will be significant and sneering headlines are sure to appear in newspapers like the Daily Mail or the Daily Telegraph.

Pressure on the prime minister could even force him to move up the national referendum on EU membership, currently planned for 2017. And were that to happen, a British exit from the EU would become a very real possibility.

Cameron's staff is currently doing all it can, in a nationwide campaign, to put the focus squarely on the European Parliament and trying to paint it as a power hungry body trying to pull influence away from EU leaders. British diplomats accuse Juncker, Schulz and a handful of other EU parliamentarians of seeking to leverage European treaties to improve parliament's position within Brussels' institutional structures. "They are playing with dynamite," they claim.

Germany's own chancellor is partly responsible for the fact that things have gotten this far; in recent months, Merkel's approach has been more hands off than normal. For quite some time, for example, she ignored Martin Schulz's efforts on the center-left to establish support for the concept of a Europe-wide leading candidate on the German model. Indeed, it became something of a Schulz fait accompli. Merkel even agreed to make Juncker the lead candidate for the center-right European People's Party -- to which her CDU belongs -- even though she privately shared the widespread reservations about the former Luxembourg prime minister. Finally, at last week's EU summit, she lost control of proceedings and was only able to stop what would have been a highly contested vote on Juncker with considerable effort.

Since then, the image she has presented publicly is one of wavering. First she downplayed Juncker, describing him as just one of many who could do the job. Then she backed him publicly, promising several times she would intercede on his behalf.

Merkel has since spoken to almost all of the 27 other EU leaders in the search for a compromise. That process is expected to continue until the end of June. "We have time," she told German parliament in Berlin this week.

Meanwhile, Jean-Claude Juncker is expressing his optimism. On Monday, he sent out his first Tweet in five days, quite a delay when viewed against his Twitter activity during the election. "I'm more confident than ever that I will be the next European Commission President," he wrote. Juncker refused to further elaborate when contacted by SPIEGEL. 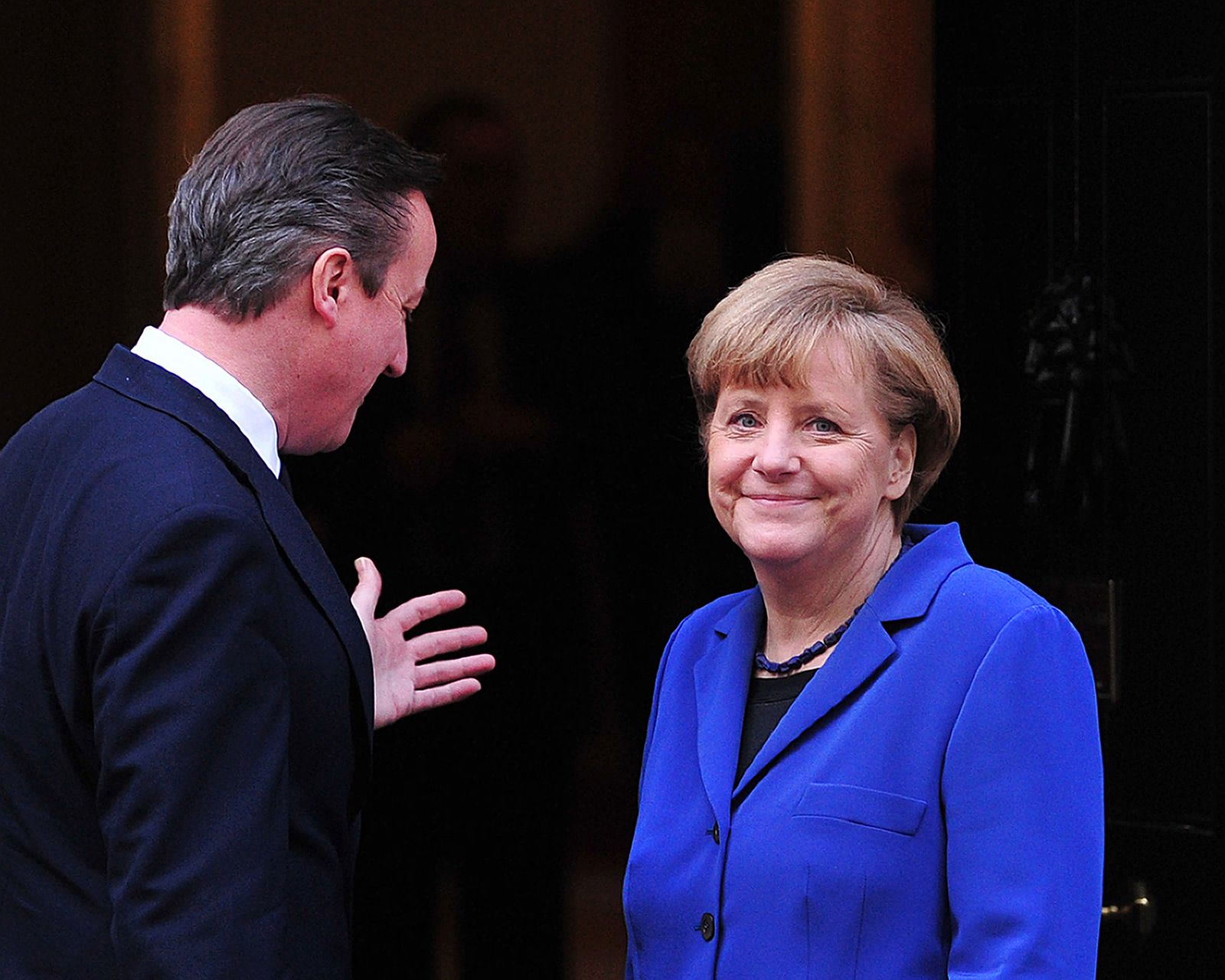