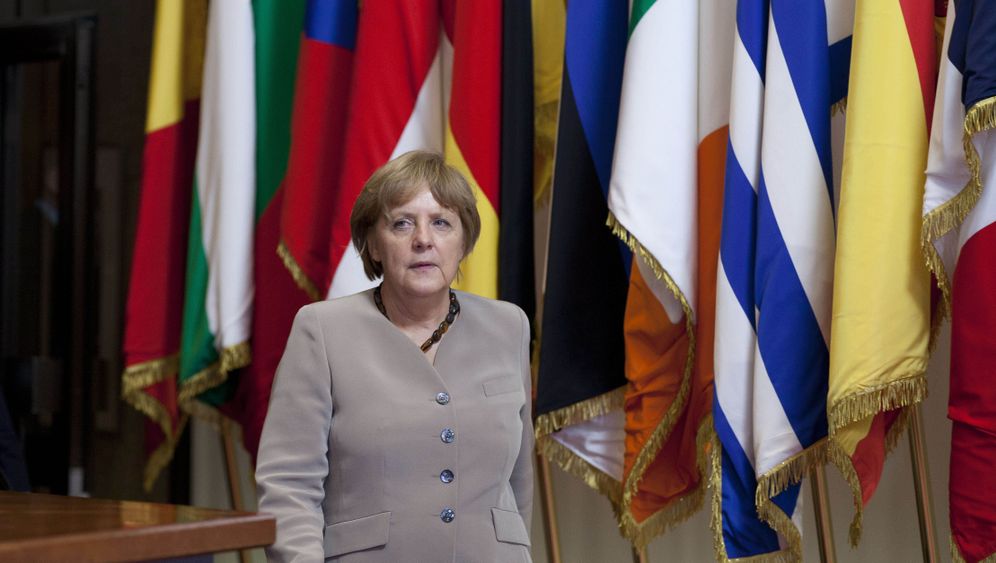 Mario Monti was so relieved that he even spoke about football. He is proud and happy that the Italian national team defeated Germany in the semi-finals of the European Football Championship, the Italian prime minister said in the early hours of Friday morning after the marathon night of European Union summit meetings. Given that Monti isn't much of a soccer fan, Italian journalists saw his comments as a veritable emotional outburst.

With good reason. Monti emerged from the late-night negotiations as a clear victor, having broken Chancellor Angela Merkel's resistance just as Italian striker Mario Balotelli cracked the German defense on the pitch in Warsaw earlier in the evening. In 15 hours of negotiations in Brussels, Monti together with Spanish Prime Minister Mariano Rajoy secured easier access to the permanent euro-zone bailout fund, the European Stability Mechanism (ESM). Euro-zone member states which fulfil the budgetary rules laid down by the European Commission can now receive aid without agreeing to tough additional austerity measures. Strict oversight by the troika of the European Commission, European Central Bank (ECB) and International Monetary Fund (IMF) would no longer apply.

The ESM will also be allowed to provide direct aid to banks in the future, but only after a European banking supervision mechanism, under the auspices of the ECB, is established.

It is a painful defeat for Merkel. With the German parliament set to approve the ESM and the fiscal pact on Friday evening, Merkel had been eager to avoid making concessions to the southern Europeans. On the eve of the summit, the chancellor's advisers had ruled out the possibility of easing the rules governing access to the ESM. In particular, Merkel considered IMF oversight of aid recipients to be non-negotiable.

Now, however, she will travel in defeat back to Berlin, where she is scheduled to address the German parliament in the afternoon. Merkel's confidants began trying to put a positive spin on the summit results early on Friday morning. The chancellor had pushed through her maxim of "no liability without oversight," said Hermann Gröhe, general secretary of Merkel's Christian Democrats, in an interview on German breakfast television. Direct ESM aid to banks will only be allowed, he said, once the oversight authority is established at the ECB.

From the German perspective, however, that is but a small consolation. Mediterranean countries, for their part, can celebrate a breakthrough. The euro zone's "mental block" has been broken, Monti exulted, adding that he was very satisfied with the agreement. His negotiating tactic -- which involved holding up agreement on the European Union growth pact until his other demands had been met -- proved to be "objectively very useful," the Italian prime minister added.

Monti's uprising began at 7:00 p.m. on Thursday evening. That was when European Council President Herman Van Rompuy wanted to conclude the summit's first working session and announce the growth pact to the press. According to participants, Monti was furious and asked Van Rompuy where he was going. Had the president perhaps not understand correctly, Monti reportedly asked. The Italian prime minister said he could not leave the summit without concrete measures to fight the high interest rates on Italian government bonds. He would not agree to the growth pact until that issue had been clarified. Rajoy lent his support to Monti and said that he too could not yet approve the pact.

The threats apparently made an impact on the other delegates. Danish Prime Minister Helle Thorning-Schmidt asked pointedly whether the attendees were now all hostages. Van Rompuy remained seated. It was only after 10 p.m. that he made another attempt to appear before the press. Merkel urged him to announce an agreement on the growth pact. French President François Hollande, however, told him to tell "the truth."

At 10:30 p.m. Van Rompuy appeared in the press room and announced an "interim status." In principle there were no objections to the growth pact, he said, but two countries were not yet able to agree on it.

After midnight, when the blockade had still not been resolved, representatives of the 10 non-euro EU members headed back to their hotels. Leaders of the 17 euro-zone countries remained in their seats and began a decisive round of negotiations. At this point, members of the German delegation were still insisting they would not give up their hardline position.

A few hours later, however, Monti and Rajoy had the chancellor where they wanted her. She agreed that countries would in the future be able to receive funds from the ESM without having to submit to troika oversight. Instead, only the European Commission's annual targets will have to be met. Monti said that Italy would not ask the ESM for help. For now, he only wanted to send a signal to the financial markets in order to take the pressure off Italy.

But the decision raises all sorts of questions. What happens to the countries that have already received money from the temporary rescue fund, the EFSF? Officials in Brussels said that the new decision did not change anything about the programs for Greece, Portugal and Ireland. All the agreed goals will continue to apply and be monitored by the troika. But those countries might also start clamoring for the terms of their deals to be relaxed. The summit's decision gives the Greek government in particular more ammunition for renegotiating the terms of its bailout, a step that new Greek Prime Minister Antonis Samaras has already said he wants to take.

The session ended at 4:20 a.m. on Friday morning. Ten minutes later, Van Rompuy and European Commission President José Manuel Barroso announced the breakthrough at a press conference. At 5:00 a.m., Monti, the winner of the evening, appeared at the Council building's exit. He gave a press conference on the way to the car -- and announced that he will travel to the European Championship football final in Kiev on Sunday.