He's been touted in recent days as the best possible candidate to challenge incumbent Chancellor Angela Merkel in this fall's general election in Germany, but criticism is also mounting of the apparently lavish perks Martin Schulz gave to staff during his years as a member of the European Parliament in Brussels. Schulz had a reputation of being a tough boss in the parliament, but also one who richly awarded his staff.

And in doing so, it appears that Schulz was even ready to bend the rules of parliament.

Two weeks ago, Schulz became the subject of criticism over the largesse he has shown to former European Parliament staffer and current campaign director Markus Engels, including a questionable employment arrangement that guaranteed Engels lucrative extras on top of his base salary. Furthermore, Schulz pushed hard in 2014 for Engels to become an EU civil servant, a coveted status, even though it was not in Schulz's jurisdiction to do so. Likewise in 2014, Schulz tried to push for Engels to become the head of parliament's Media Intelligence Unit, even writing an email to a personnel department staff member to get it through.

An internal EU document that has surfaced since the initial allegations claims that, in October 2015, Schulz attempted to secure career advantages for staffers in four other instances, showing apparent disregard for parliamentary rules in doing so. Schulz's decisions to a large degree, the document states, "are incompatible with EU staff regulations."

The week before last, members of the European Parliament with Merkel's Christian Democratic Union (CDU) began circulating a list of possible angles of attack against Schulz, a dossier that Katrina Barley, the secretary-general of Schulz's center-left Social Democratic Party (SPD), described as a "smear campaign." But this time around it isn't conservative politicians making the charge -- it's coming from the administrative staff of the European Parliament, which does not have a reputation for mudslinging.

They allege that Schulz acted on his own accord to initiate the process of promoting several close staff members, including a German member of the CDU and Schulz's diplomatic adviser. In doing so, it appears that Schulz went well beyond his actual job description as then-president of parliament.

Normally, after serving under the president, EU officials are required to return to their former positions. But Schulz didn't let that stand in his way and instead actively sought to provide his staff with well-paid positions as division heads. He also stipulated that their time spent working for him would also be calculated at the same leadership level, a further violation of the rules that in turn angered administrative staff in parliament.

As the document notes, Schulz's generosity could get expensive for taxpayers because Schulz's decision forces parliament and the European Commission, after the president leaves, to "provide them with a high-level position." Schulz reportedly went over the heads of the administrative officials who usually make these decisions and also their secretary-general, Klaus Welle. The document states that the president only has the right to issue a "recommendation" in the hiring of directors. It was only with effort that at least part of the president's actions could be stopped.

When asked officials at the European Parliament noted that ultimately, Schulz was not able to promote his people in the way he wished. Rather, another solution could be found that was in line with the rules.

The Business Trip that Wasn't

But in the case of his current campaign manager Engels, Schulz was more or less able to get everything he wanted. Starting in 2012, Engels began working for Schulz in the European Parliament's public information center in Berlin but Brussels remained the official location of his employment. This meant that, in addition to getting a 16 percent allowance for working abroad (which bolstered his base salary by 840 euros a month to 5,200 euros), he was also able to receive 16,000 euros for supposed constant business travel from Brussels to Berlin, despite the fact that he spent most of his time in Berlin. Internal documents indicate that Engels spent 273 days conducting business travel in 2012.

As has now emerged, Schulz intervened personally on Engels' behalf. A Jan. 18, 2012 letter Schulz wrote to Engels' supervisor, Juana Lahousse-Juárez, who was head of the Directorate-General for Communication at the time, included a request that Engels be sent to Berlin on a so-called "long-term mission" until the end of his contract. To justify the move, Schulz wrote that he wanted Engels in Berlin to "support my activities in Germany."

But his own party, the SPD, tried to create the impression that Schulz had not intervened in the drafting of his staff member's contract. The party claimed that Engels was needed in Berlin "to handle German journalists who are not accredited in Brussels." The party also claimed that such "long-term missions" were a normal practice in the European Parliament.

That, however, isn't true. Contacted by SPIEGEL, the European Parliament stated that of close to 7,600 staff members, from January 2016 through today, only 13 employees are on long-term missions. The rest, it would seem, actually have to pack their bags when they take business trips.

Just over a week ago, the chair of the European Parliament's Budget Committee, Ingo Grässle of the CDU, responded by saying: "Schulz circumvented the rules of parliament like no parliament president before him. When it came to his fellow party members, especially, there were no boundaries to his generosity." 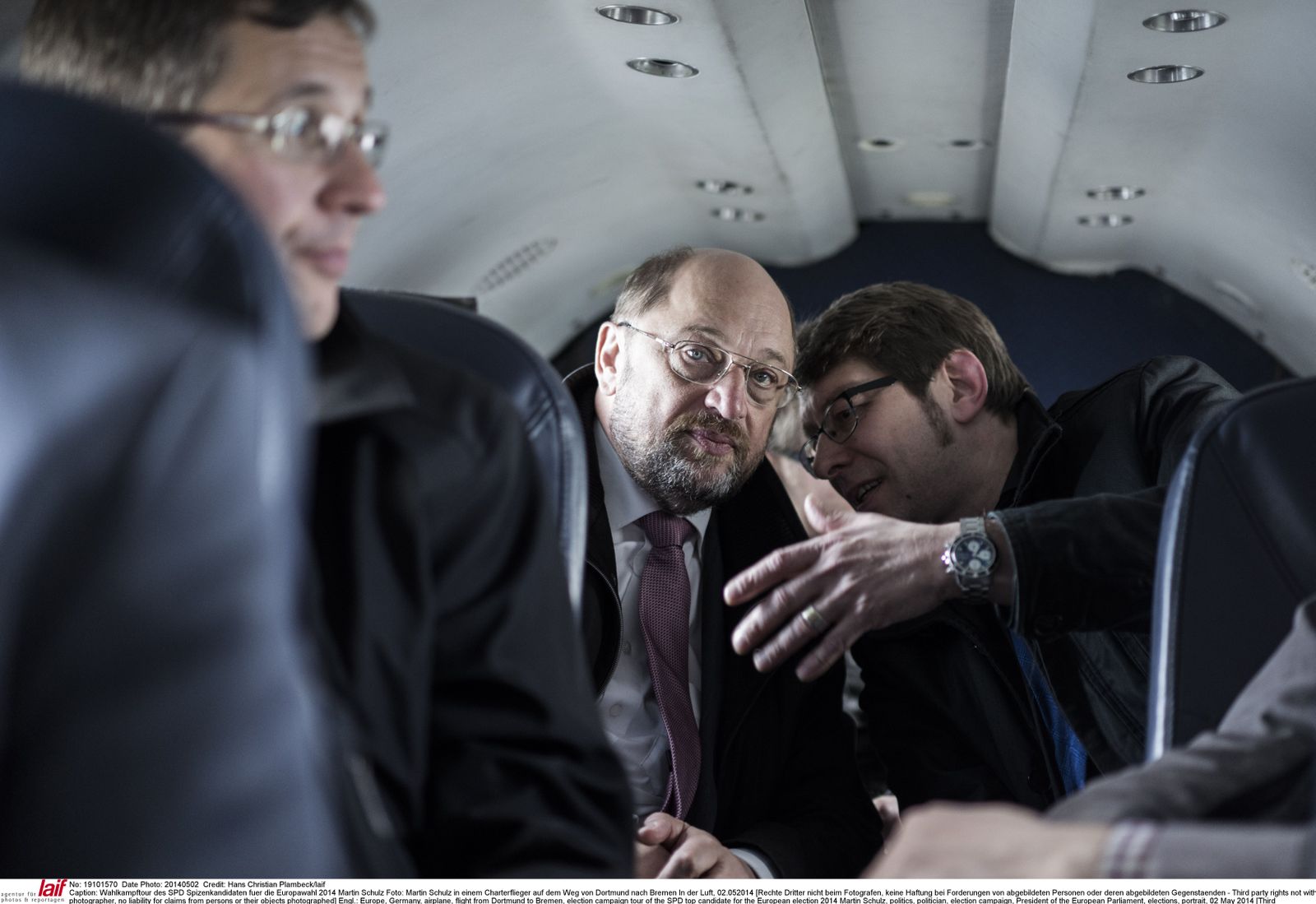 Martin Schulz (left) and Markus Engels during a flight in 2014 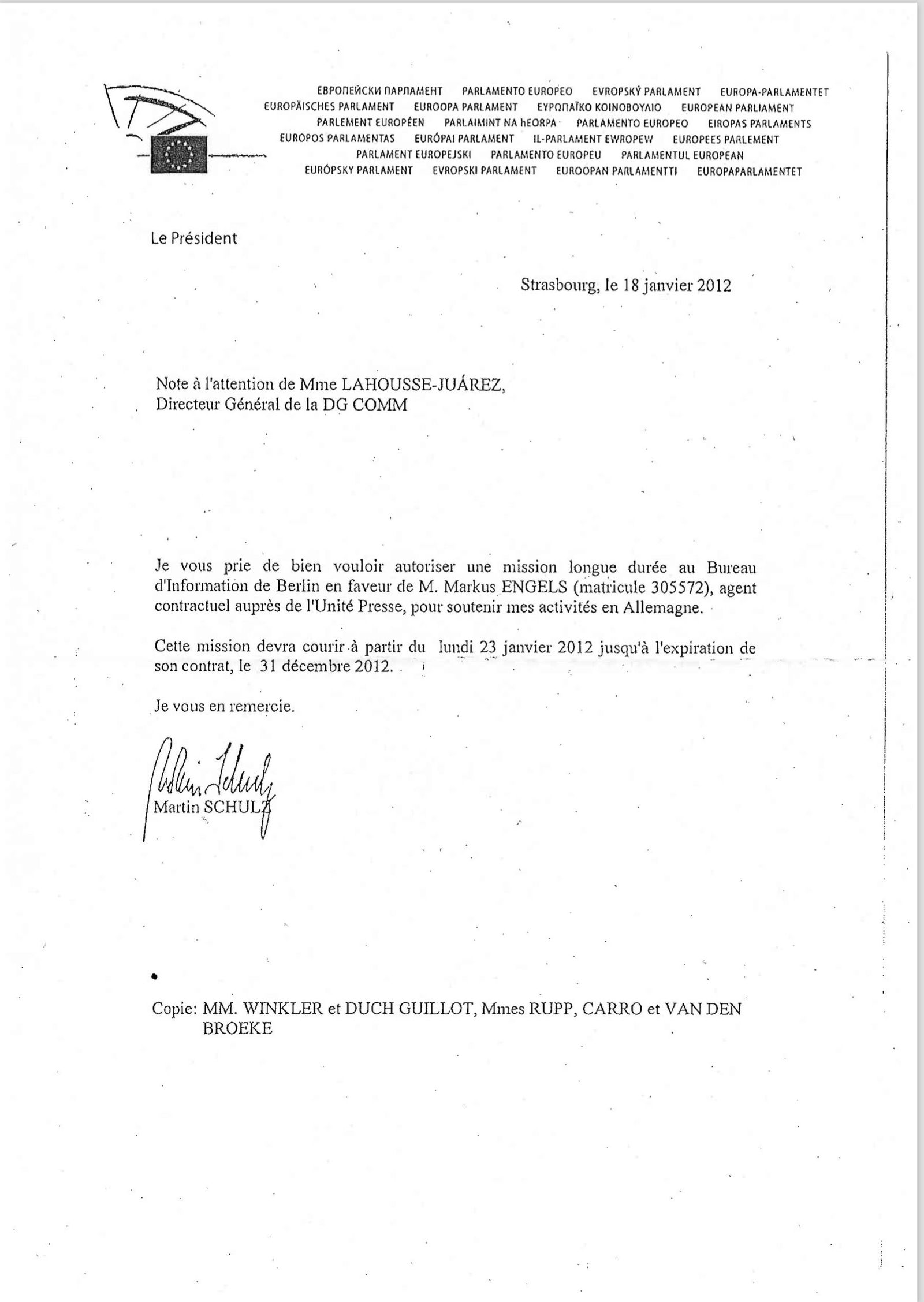 With this letter, Schulz requested a "long-term mission" for his staffer Engels at the European Parliament's public information office in Berlin. It also states that the post should continue until the expiration of his contract on Dec. 31, 2012.