She actually did bring along a gift in the end, a gift basket wrapped carefully in cellophane with a fat, gold ribbon. Chancellor Angela Merkel, likely the most hated politician in Greece, presented the offering to Greek Prime Minister Antonis Samaras while standing in front of a couch in his office. Both were smiling, even beaming, and grabbed each others' elbows in a half embrace. There was also a card, which they both read together with smiles on their faces.

Merkel's visit in Athens was, as they both insisted following a two-hour tête-á- tête in Samaras' office, a meeting among friends, among partners. It is, they said, important for friends and partners to "speak together" and to remain "in intensive contact."

Outside, helicopters buzzed over the city in the overcast sky. Despite the overwhelmingly peaceful protest against Merkel's visit on Syntagma Square in central Athens, a few troublemakers fulfilled the expectations of violence. The images that we have all become used to were the result: clouds of teargas, stun grenades, people running in all directions and, more than anything, riot police everywhere. 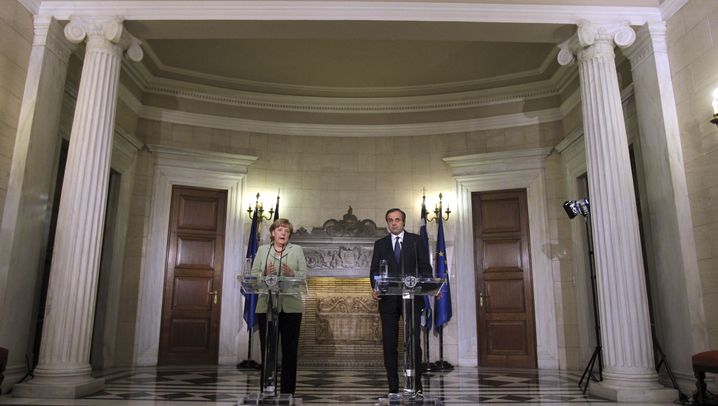 It was a promise repeated by left-wing opposition leader Alexis Tsipras, though he meant it more as a threat. And the images produced in the Greek capital on Tuesday were powerful in their expression of the desperation that has enveloped the country's citizens: burning swastika flags, posters reading "Merkel Go Home" and black-clad protesters throwing rocks at the police. One friendly-looking, moustachioed gentleman showed just how ugly relationships can be, even among partners: "Get out of our country, bitch," read the sign he was holding.

Samaras seems to have been aware that Greek hospitality would be stretched to the limit by Merkel's visit. Security precautions were greater than any previous such visit in the Greek capital's recent history, including that of US President Bill Clinton in 1999. Police even shut down the road running into Athens from the airport, one of the city's main arterials. Much of the city center, for once, was completely free of automobile traffic.

Following their meeting in Villa Maximos, Merkel, with Samaras at her side, faced the press -- and the obvious question as to why she had come. "For me, it is very important to really get to know a country," Merkel said. Whether a half-day in a high-security cocoon is sufficient seems doubtful. But the gesture was well received. The visit, Samaras said, "proves that we are breaking an international isolation." Greece's image abroad is much better now than it was just a few months ago, he insisted, and Merkel's visit is the proof.

Still, despite the public display of affection, Merkel's visit does little to change the current situation facing the highly indebted country. The country is in urgent need of fresh aid funding, with the troika of the International Monetary Fund, the European Central Bank and the European Commission currently assembling its assessment as to the progress Athens has made toward achieving the reforms Greece's creditors are demanding. The next aid tranche of more than €30 billion ($39 billion) hangs in the balance.

Greece's economy, furthermore, remains in freefall, having shrunk by 20 percent in four years and facing another 6.5 percent hit this year. Whether the country will ultimately be able to remain in the euro zone remains to be seen, particularly given the troika's growing frustration that Athens has yet to approve further austerity measures and has been slow to introduce necessary reforms.

International demands for additional painful cuts, many of them coming from Berlin, have fuelled the hatred on the streets. That, though, was largely ignored on Tuesday in Villa Maximos, where it was pleasantly quiet even though the demonstrations were raging just 200 meters away. "Europe is our home," Samaras said. Merkel, for her part, insisted that: "I hope and wish that Greece remains a member of the euro zone. As partners, we are working hard to achieve that."

Cynics might point out that 40 percent of German exports are delivered to partners in the euro zone. Any further fractures in the common market could hit Germany hard. But Merkel stuck to her message -- that her visit was to "gain a deeper understanding of the situation in Greece."

And she was determined to paint an image of that situation that was as bright as possible. She noted that the country's foreign trade deficit had stabilized and that reforms had reduced unit labor costs. Other things, such as deep structural reforms, take time. She did not, she said, come to Greece as a "teacher or an evaluator," though she added that the country had covered "much of the ground" necessary, but that there was still plenty to do.

Merkel's visit was not limited to her meeting with Samaras. She also met briefly with Greek President Karolos Papoulias before being rushed over to the nearby Hilton Hotel with a full police escort. Sharpshooters lined the route to protect the "friend of our country," as Samaras repeatedly referred to the German chancellor. Blue buses belonging to crack police troops lined the streets.

In the Hilton, behind the metal detectors, Merkel and Samaras met with Greek and German business representatives in the hopes of opening a "new chapter" in bilateral cooperation, as the chancellor phrased it. Stimulating growth was the catchphrase. The European Investment Bank is prepared to make €10 billion available for projects and Germany's KfW state-owned development bank is also supposed to help with financing. The money is to help finally move forward long-planned ventures, such as the municipality reform designed with the help of German experts. Greece is finally to be able to call on EU funding that has been set aside for the purpose.

It is a reform that was to have been undertaken long ago. But that was left unmentioned on this day of friendship in Athens.