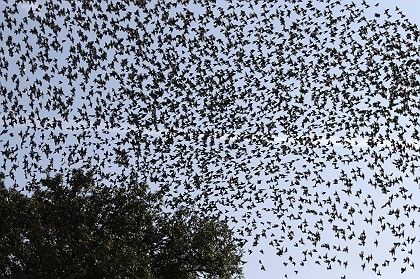 Many British yards may be abnormally filled on Jan. 26 and 27 with people sipping tea, discussing the weather, and jotting down notes -- about birds.

That's because this coming weekend, the Royal Society for the Protection of Birds is holding their annual Big Garden Birdwatch.

The idea of the event, begun in 1979, is to have British residents count the birds they see in their gardens and submit the results to the RSPB Web site. Last year, this informal survey of local bird populations -- the world's largest -- saw more than 400,000 Britons count more than 6 million birds in two days. This time around may see a dramatic increase in the birds that are counted -- including, in particular, goldfinches.

According to the RSPB, many goldfinches are sticking around their English neighborhoods instead of heading to their regular vacation destinations of southern France, southern Spain and Italy.

"The last six years have been the warmest since records began," Andre Farrar of the RSPB told the London Times on Thursday. "Over the same time, numbers of goldfinches seen in gardens during the Big Garden Birdwatch have steadily increased."

This year, nearly half of the 220,000 breeding population of goldfinches is expected to remain in England -- marking an increase of 50 percent in the number of birds which are not flying south, compared to 30 years ago.

The goldfinch is simply a harbinger, though, of the larger problems for migratory birds in Europe in the decades to come. According to the "Climatic Atlas of European Breeding Birds," compiled by scientists from Cambridge and Durham universities and published last week, the average European migrating bird's territory is predicted to shift 550 kilometers (342 miles) northeast by the end of the century if there is not a drastic reduction in greenhouse gas emissions, a main cause of climate change.

Birds that usually migrate from England to the south of France -- such as the Dartford warbler -- could be spending their winters in Britain, northern Germany, Denmark, and southern Russia. More dramatically, the future range of the average European bird species may be reduced by one-fifth. Some species will be put on the path to extinction.

Marc Süsser, an ornithologist at the German Society for Nature Conservation (NABU) in Berlin, told SPIEGEL ONLINE on Thursday, "In Germany, we see bird populations such as the black-cap now migrate to southern England instead of the Meditterranean. And some cranes, instead of heading to Spain, are still in and around Berlin in January. That's abnormal."

Süsser says that the predictions pointed out by the Climatic Atlas study would mean widespread challenges for migratory birds' habitats, particularly as climate is not entirely bound to geography. "When the climate changes and birds have to move further northeast," he says, "they will run into problems with their new habitats."

If a bird population lives near the coast, for example, and the required climatic zone moves out into the ocean, there is nowhere for that population to live, he explains. "The same goes for mountain birds that run out of mountain," he says.