When a Cambodian farmer named Sokha took out a microloan three years ago, he had no way of knowing the trouble it would eventually cause him. A father of five, Sokha and his family live off of the revenues from his cassava plantation. He borrowed $3,250 (2,904 euros) from the Sathapana Bank with which he intended to buy new machines for his field. But then the price of cassava, also known as yuca, plummeted.

Sokha could no longer service his debt. He had put up a hectare of his land as collateral, and the bank had twice sent an employee to his property to inquire about the money he owed. Sokha was forced to sell some of his land -- below market value. In turn, he took out another microloan to pay off the rest of the first one.

The price of cassava continued to drop and Sokha's debts piled up. Today, according to his own estimates, he owes more than $11,000. Out of desperation, he took his kids out of school. Now, the 7- and 10-year-old help him on the farm.

Sokha isn't his real name. He shared his story with employees of the human rights organizations Cambodian League for the Promotion and Defense of Human Rights (LICADHO) and Sahmakum Teang Tnaut (STT). The NGOs interviewed more than 60 private borrowers from four provinces, including Sokha, for their report. He requested anonymity while describing his experiences with microloans in great detail to the two organizations.

The report concluded that Cambodian borrowers were repeatedly having to resort to loans that did them more harm than good in the long run.

In 22 cases, those interviewed said they had been forced to sell property, which they had offered as collateral. Even more reported that their families often went hungry or ate low-quality food so that they could pay their debts. In 13 households, children were forced to work with their parents in the fields.

Microloans were supposed to help support this southeast Asian country's poor population. And the loans do, in fact, give impoverished people access to money. But the NGOs' reports reveal the downsides of this system -- and show how microloans can even result in human rights violations.

According to the Cambodia Microfinance Association, more than 1.9 million Cambodians took out microloans in March of this year. Today, borrowers' collective microloan debt is worth more than $5.5 billion -- more than one-fifth of Cambodia's gross domestic product (GDP). Some experts say it could even be closer to $8 billion. In few other countries in the world are microloans so widespread.

There are historical reasons for this. After the fall of the Khmer Rouge terror regime in 1979, Cambodia was left without a functioning banking sector. Microloans were seen as a good way for poor families to borrow money. The idea was that they would be able to open their own businesses and lift themselves out of poverty.

The hype peaked in 2006. At the time, Muhammad Yunus of Bangladesh and his microfinance bank Grameen won the Nobel Peace Prize. But then, four years later, multiple borrowers killed themselves in the Indian state of Andhra Pradesh. They had been unable to make their loan payments.

Since then, microloans have been the subject of criticism, though they have picked up again in recent years. One reason for this are low interest rates in Western industrial countries, which are causing European investors to look for returns they can't find at home. For creditors, microloans are also a worthwhile investment. In Cambodia, interest rates have now been capped at 18 percent. Critics, however, accuse banks of compensating for the falling rates with additional fees.

But the microloans business is worthwhile for lenders for another reason, too: In Cambodia, only 1.8 percent of borrowers are more than 30 days in arrears with their payments, according to official statistics. Initially, at least, this was interpreted as a sign that the system was working as it should.

Human rights activists, on the other hand, point to the reasons for the low default rate. Land titles, they note, are often used as collateral for loans. And these aren't only properties used for agriculture, but often the very land upon which borrowers' homes are located. According to LICADHO's and STT's investigation, many of those affected reported being pressured to sell their land in order to make their loan payments -- the very property they rely upon to generate income.

Cambodia's microloan sector is dominated by six players. Together, they issue more than two-thirds of all microloans. KfW, the German state-owned development bank, holds a stake in one of them: the Amret Microfinance Institution. Between 2009 and June 2016, KfW, which also happens to be the world's leading national development bank, awarded a total of $370 million in loans in Cambodia.

In one of KfW's public brochures, the bank attributed the low default rate of its customers to the good portfolio of the supporting investors: "This is evidence of their increasing professionalism and understanding of their clients' companies."

However, concerns about borrowers' over-indebtedness is apparent in an internal report titled, "Study of Over-Indebtedness in Cambodia II." The paper was written in October 2017 with the support of the German Federal Ministry for Economic Cooperation and Development (BMZ). More than 1,660 Cambodian microloan holders were interviewed for the report. Although the results were classified as "confidential," DER SPIEGEL has obtained a copy.

The report found that half of microloan holders were over-indebted. Sixteen percent were even counted as "highly over-indebted." Even those who didn't fall into one of these two categories were spending more than their monthly income on debt repayments. Furthermore, the report stated that "debtors use different strategies to repay their loans. For example, they use up their savings, ask family members for financial help, work overtime or adjust their eating habits."

The report also noted that many debtors had to take out additional loans in order to pay back existing ones. Of those people interviewed, 56 percent had more than one loan. Ten percent had four loans. These people risked being dragged into a cycle in which existing loans could not be serviced without taking on new ones. And with each new loan, new processing fees were collected as well.

Despite the relatively high over-indebtedness ratio of 50 percent, KfW does not appear to see any real problem. "In essence, the study has shown that there is no serious level of over-indebtedness," the bank told DER SPIEGEL in a written statement. "Neither the data from microfinance institutions nor the data from clients confirm a clearly alarming level, nor is there any over-indebtedness." At the same time, the bank is adopting more flexible repayment options for borrowers.

After the turn of the millennium, microloans were still one of the Cambodian government's central methods for combating rural poverty. Meanwhile, however, even it has distanced itself from the practice. According to a report by Bloomberg, the government had on its website a message in bright, red letters: "All MFIs (micro finance institutions) are private, not owned by the state." 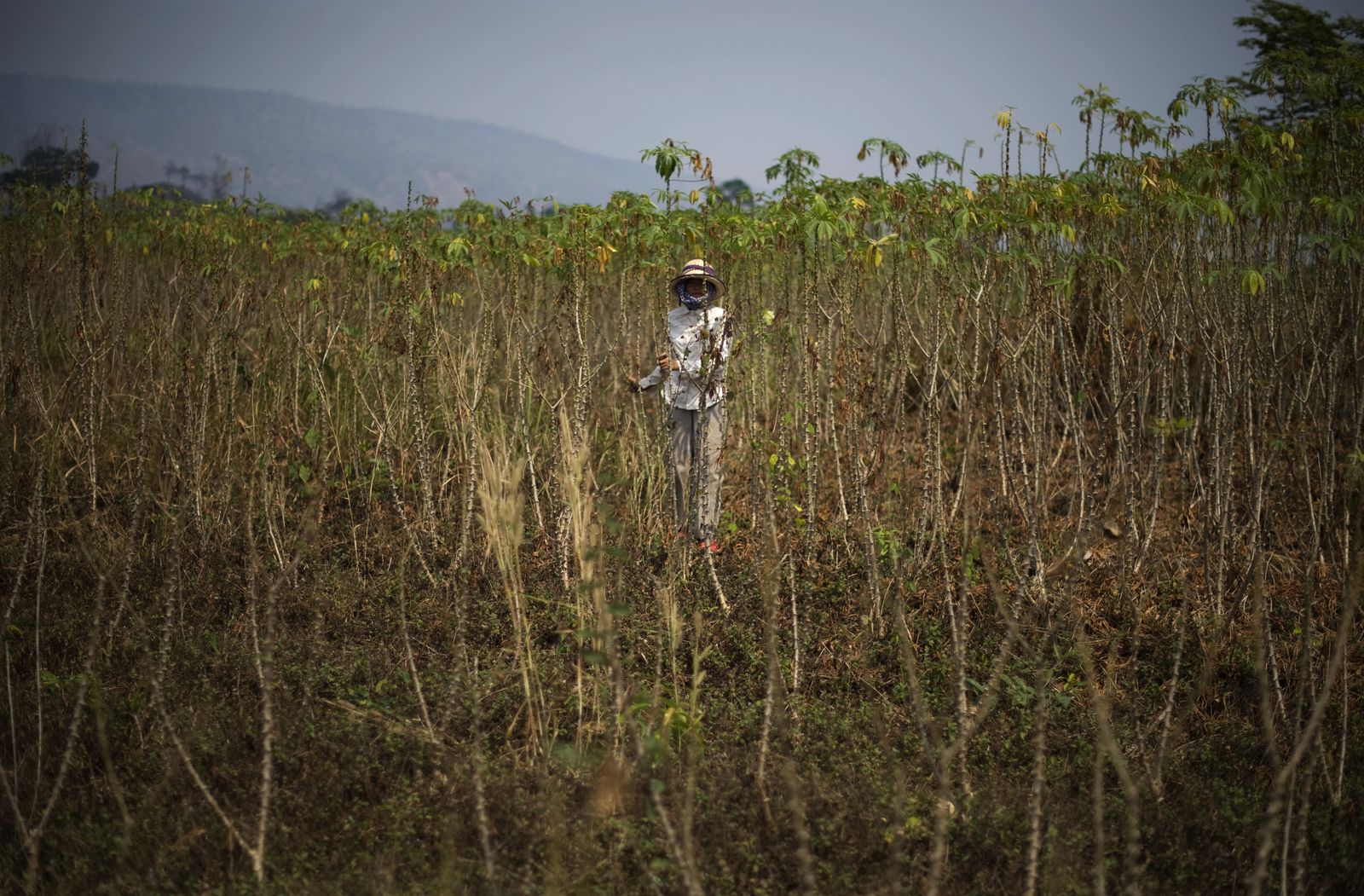 A woman stands in a field of cassava roots in western Cambodia. 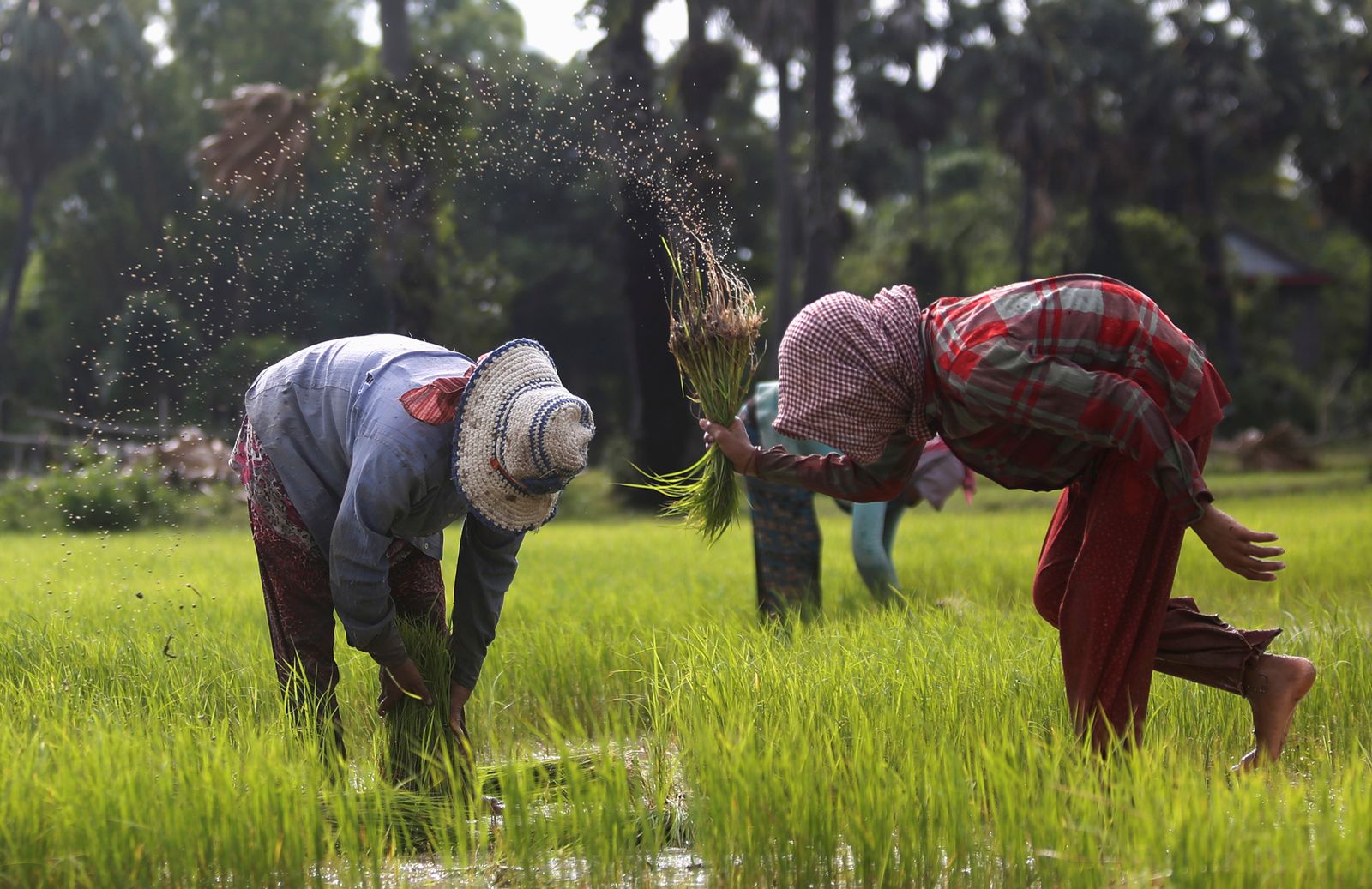 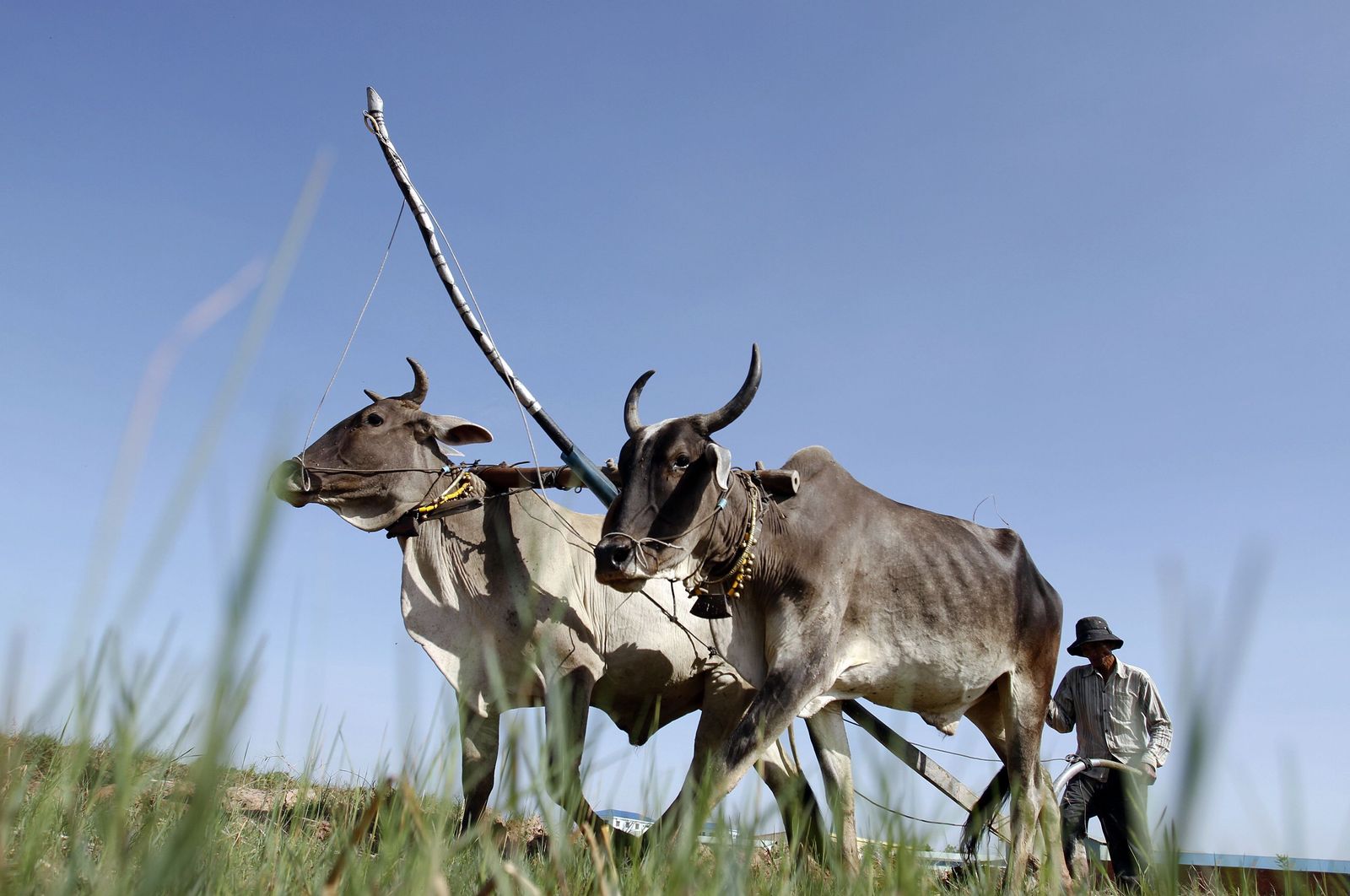 A farmer ploughs his field near Phnom Penh.