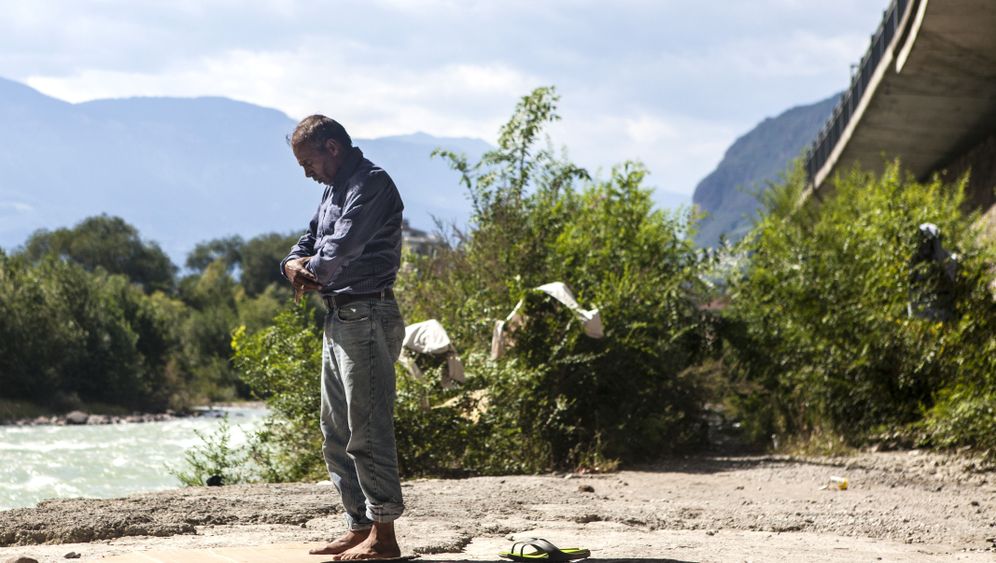 The train station in Bolzano, a city in the northern Italian province of South Tyrol, has become a waiting room for Europe in recent weeks -- a transit camp for two types of passengers. Both are traveling with little luggage, and they are from worlds that rarely intersect.

On a Wednesday morning in late August, a young man from Gambia named Zacharias is standing at the window of the express train from Verona to Munich. He gazes down at colorfully dressed mountain climbers, vacationers and European travelers as they disembark in Bolzano and meet friends or family on the platform. Zacharias, though, stays on the train. He manages to escape the notice of police officers and border guards who comb through the compartments and fish out anyone who looks like a refugee. The train begins to move.

Zacharias, 18, is one of about 100,000 refugees and migrants who have arrived in Italy this year. He hopes to make it to Austria and from there to Germany, though he has been told that this second part of his journey will be difficult and that securing asylum in the north is impossible.

Whereas the number of migrants arriving in southern Italy has dropped recently, a new border has been established here in the north. In mid-August, the Austrian army sent 70 soldiers to the Brenner Pass, the Alpine border between Italy and Austria, and they use iron rods to poke through freight trains for stowaways. In addition, police are checking passenger trains more thoroughly than ever before. Austria is in the midst of an election campaign, and gone are the days when around 200 Africans, Pakistanis and Afghans heading north were waved through the border each day, while Bolzano residents handed out food and clothing. Today, says one railroad worker, residents are more likely to point out refugees hiding under the seats and say: "Look, mister conductor, there's another one trying to hide."

Zacharias' trip comes to an end in Fortezza, four stations before the pass, when Italian police officers ask him to leave the train. Five Somalis are already sitting on the platform, on their way back from Austria - five of up to 1,000 migrants apprehended by Austrian authorities each month and sent back across the Brenner. At a police station in Austria, the Somalis' fingerprints had been entered into the Eurodac database, their cash and cell phones had been confiscated, and they had been told to report to the immigration office in Bolzano. They return to Bolzano with Zacharias and the train station becomes the last stop on their journey.

It is as if a new dividing line in border-free Europe now passes through Bolzano, an invisible boundary for Africans like Zacharias, who keep trying again and again but are shot back like pinballs. For the past several months, 20 to 30 new migrants have found themselves stranded in Bolzano every day - and there are no indications that the situation will change soon.

Somalis, Afghans and Ghanaians now loiter in the park outside the Bolzano train station, smoking marijuana and selling drugs. Nigerian women prostitute themselves on the street behind the station. Those who have been unable to find a place to sleep wash themselves on the banks of the Eisack River. A group of about a dozen volunteers, most of them children of migrants, attend to their needs. They can only laugh at the words of Interior Minister Marco Minniti, who says that he finally sees a "light at the end of the tunnel." The volunteers in Bolzano only see tunnels, and they say their work has just begun.

Two of these volunteers receive Zacharias in Bolzano after his aborted train trip. They provide him with a cot in a church for the night, but he is homeless after that. Despite all obstacles, Zacharias is self-confident and certain of victory, and he has even learned to speak decent Italian. In speaking to him, you realize that no one can stop him on his journey to the north. Not his mother, whose parting words were: Don't waste your life with people who don't want you. And not those in uniform, who have now blocked his path for the third time on his odyssey.

In Gambia, Zacharias used to build working computers from the electronic garbage coming from Europe. He says he hasn't come to Europe empty-handed; he has something to offer. He wants to complete a training program, work hard, and "become an independent man."

He is still a long way from his goal. After being beaten and harassed in Libyan camps, he finally made the crossing to Italy, where he lived in a reception camp near Brindisi for six months. He worked as a day laborer picking tomatoes, and felt he was being exploited like a slave. He doesn't have a particularly high opinion of Italians. He believes they are disorganized and spoiled. He, on the other hand, wants to do something with his life, he says.

Zacharias is firmly convinced that he will make it, and that he will lead a life of prosperity and dignity in Germany. Other Africans have also made it, he says, citing as proof the photos they send him every day, and the success stories he reads on Facebook and WhatsApp. He refuses to believe that these are sugarcoated versions of the truth, and that migrants are too ashamed to describe what life in Europe is really like. Instead of describing their loneliness, hopelessness and aimlessness, they lie and send photos of themselves standing in front of expensive cars.

Partly because of these misleading accounts, the flow of migrants continues unabated, always finding new routes when old ones become impassable, like the route across the Balkans in the past or the Mediterranean crossing from Libya today.

An hour and a half by train from Bolzano, a woman is sitting in an austere office across the street from the Brenner Pass train station. Every day, she is witness to this urge for a supposedly better life in northern Europe. Her name is Zineb Essabar, a 38-year-old with dark skin and braided hair. She is a Moroccan from Casablanca who came to Italy 12 years ago as an archeology student. For her, Italy is not a transit country but a second home.

She has worked for Volontarius, an aid organization, since January and almost every hour, she walks along the platforms in this inhospitable place, looking for refugees hiding underneath freight trains. Essabar comforts and advises them, and provides them with a bed for the night, but she is unable to offer more than that. This is a place where dreams come to die, she says.

She sees the men being thrown off trains, standing at the end of the platform and gazing longingly to the north, at all the Porsches and SUVs racing along the highway, and at the enormous outlet mall. Be patient, she wants to tell them, you can't have everything at once. She is infuriated by the widespread ignorance about real life in Europe, and by the persistent myths about Germany.

She begs the young men to stay in Italy. "You are registered here, your only opportunity is here," she tells them. Italy has committees that rule on hardship cases, grants asylum for humanitarian reasons, and appreciates migrants who learn Italian, work hard and are industrious. Italian asylum practices are much more flexible and imaginative than in Germany, she tells them. Believe me, I know.

Still, Essabar knows that her words fall on deaf ears. The migrants will keep trying, if not at the Brenner Pass, and if not by train, then by paying someone a few hundred euros to smuggle them by car across the border in the Puster Valley. Or they will attempt to cross the unfenced border on foot, as the Jews did when fleeing from Nazi Germany.

Whenever she feels particularly disillusioned, she comforts herself with the rough poetry of the place, taking pictures of flowers growing between the tracks and of the snow-covered peaks that surround the pass. And then she sends the migrants back to Bolzano again.

The province of South Tyrol has officially taken in 1,700 asylum seekers, or less than half a percent of the population of 500,000. In addition, there are several hundred illegal immigrants, usually with no prospects of gaining asylum.

What does a city do when migrants from distant countries turn up on its doorstep? It isolates itself and offers a firm response. There are raids in the park several times a week, with flashing lights and dogs searching for drugs, which they usually find. It is an uncomfortable time for prosperous South Tyrol, itself a region that has suffered in the past. At the beginning of the 20th century, poor farmers sent their children across the Alps on foot so that they could work as maids and shepherds in southern Germany. Residents of South Tyrol today, however, appear unwilling to recall that era.

Gina Quiroz from Colombia, who works with Essabar at Volontarius, starts her shift when night falls in Bolzano. Her office is in a camper van, where she spends two nights a week puttering around the streets that surround the train station. She has thermoses filled with tea and condoms on board. Quiroz attends to the needs of Bolzano's illegal street prostitutes. They arrive by train from Trento and Verona every evening, 40 to 50 commuters, mostly from Nigeria, who haven't been in Italy for very long. They get dressed and put on their makeup in the restroom at the train station. When their work is done, they wait on the steps beneath fascist-era statues for the first train at 5 a.m.

Unlike ambitious Zacharias, these women no longer dream of a wonderful future in Europe. They charge about €30 per customer and use the money to pay off their debts with traffickers and pimps.

One of them is Blessing, a Nigerian woman in hot pants and a straight-haired wig standing at a bus stop in the city's industrial zone. "Ciao," she says as she walks toward the camper, "tutto bene?" But then her rhinestone-decorated mobile phone, which she carries in her bra, rings. The next customer is on his way.

Quiroz keeps driving around under she gets a call from Rita, who is not a prostitute yet but heading in that direction. From Lagos, Rita is one of the many hardship cases in Bolzano, one of more than 11,000 Nigerian women who have arrived in Italy recently, and possibly pregnant. A charity organization has provided her with a hotel room, but only temporarily. She is in tears as she tells Quiroz that she is lost. She asks a pedestrian for the address, and Quiroz hurries to get her.

Rita gets into the van. Short, plump and wearing a flowered skirt, she looks like a lost child. She talks about the day when she received a call from the "madames," who told her: Either you go on the street with the other girls, or we'll come and get you, and you won't survive that.

The "madames" are the women who lend girls like Rita the money for the trip through the Sahara and the voyage to Italy, which can cost up to €35,000. The deals are sealed with a voodoo ceremony of sorts, in which the girls' hair and blood, and that of their supposed protectors, are burned and drunk. Those who do not pay their debt are threatened with a curse on them and their families.

Rita has stopped crying. It was probably a mistake to travel to Europe, she says. "Why?" asks Quiroz, the volunteer. "Because I have no one here, and because I miss my children, five and eight. Their grandmother is taking care of them."

The next day, Rita files an application with an aid organization to be returned to Nigeria. Quiroz says she hasn't ever suggested to any of the girls that they do so. But she thinks it's a good start.