European aircraft manufacturer Airbus may be facing billions of euros in repayments due to potential order cancellations resulting from severe delays in the development of its A400M military transport plane. 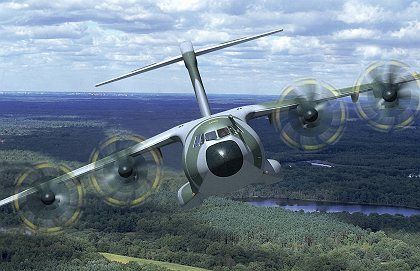 A computer image depicting one thing the Airbus A400M has yet to do: fly.

The European military procurement agency Occar has reminded the countries involved in the A400M project that they can cancel their purchase contract on March 31 because a "critical milestone" hasn't been achieved. The maiden flight of the aircraft, originally planned for January of last year, still hasn't taken place.

Airbus parent company EADS says that due to many technical problems, it remains unclear when a prototype will be able to lift off.

If Airbus does not soon explain how and when it can solve the problems, the German Defense Ministry will consider ending the contract, according to sources in the ministry.

If German Defense Minister Franz Josef Jung were to agree with the six other countries to exercise their right to cancel the deal, Airbus, which has been promised state aid by France for its civilian aircraft production, would face financial trouble.

According to a contract agreed on in May 2003, Airbus would have to repay billions of euros in down payments within 60 days. The German defense ministry expects that French President Nicolas Sarkozy will soon urge German Chancellor Angela Merkel to stick with the project, even if the A400M is delivered far later than planned, performs less well than expected and ends up costing more.

But that is precisely what Jung is so far refusing to do. He rejected calls from EADS for a change in the contract which also envisage high fines in the event of delivery delays.

Berlin has ordered 60 aircraft for more than €8 billion. Paris wants to buy 50. A total of 192 planes worth €20 billion have been ordered by nine countries.

Commissioned by seven European NATO countries in 2003, the A400M was at first hailed as Europe's most ambitious cross-border arms procurement project. But problems have plagued the project almost from the start. The software controlling the steering mechanism has proven challenging, the propeller engines are too loud and the plane is still too heavy.

At the World Economic Forum in Davos, Switzerland early last month, Airbus CEO Thomas Enders hinted to SPIEGEL ONLINE that the project may eventually be cancelled. "We want to build the plane," he said. "But not at any price."