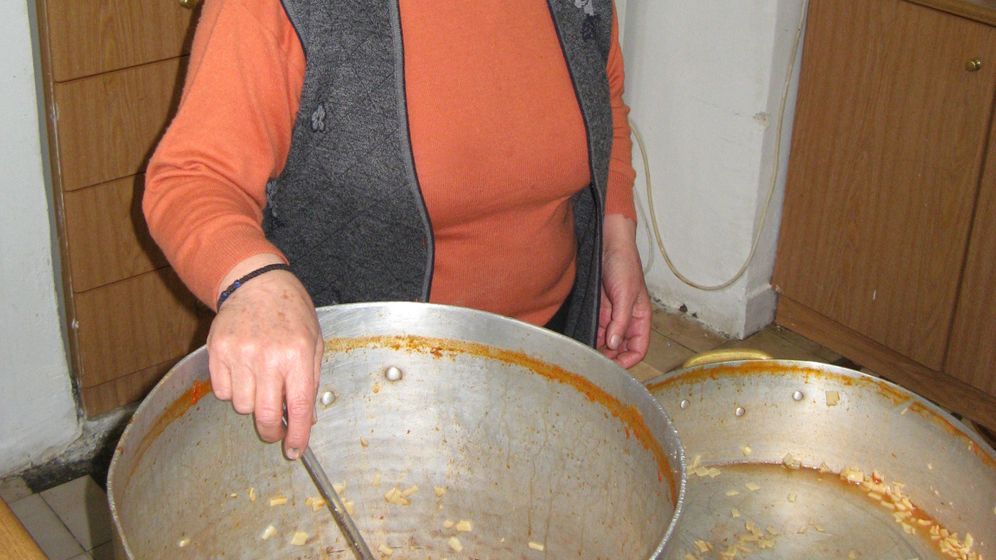 If this crisis has reached Piraeus, then it's done a good job of hiding itself. Even on this cold February night, the luxury cars are lined up outside the chic, waterfront fish restaurants in this port suburb of Athens. But Leonidas Koutikas knows where to look. Not even 50 meters off the main promenade, around two corners, misery is everywhere. Koutikas finds a family of five living behind a tangled tent that has been attached to the wall of an apartment building.

Koutikas and his colleagues from the aid organization Klimaka are expected. They hand out their care packages here every night. "Each day the list of those in need gets longer," Koutikas says. He speaks from experience. Until recently, the 48-year-old was sleeping on the streets himself.

Athens has always had a problem with homelessness, like any other major city. But the financial and debt crises have led poverty to slowly but surely grow out of control here. In 2011, there were 20 percent more registered homeless people than the year before. Depending on the season, that number can be as high as 25,000. The soup kitchens in Athens are complaining of record demand, with 15 percent more people in need of free meals.

It's no longer just the "regulars" who are brought blankets and hot meals at night, says Effie Stamatogiannopoulou. She sits in the main offices of Klimaka, brooding over budgets and duty rosters. It was a long day, and like most of those in the over-heated room, the 46-year-old is keeping herself awake with coffee and cigarettes. She shows the day's balance sheet: 102 homeless reported to Klimaka today.

Tales of the 'New Poor'

Many of those belong to what is called the "new poor" here. "It really started about two years ago," Stamatogiannopoulou says. Suddenly, it wasn't just people with psychological problems or drug addictions who were knocking on the organization's red wooden door. "The middle class is increasingly becoming our target group," she says.

The "new poor" includes Lambros Zacharatos, who navigates the streets of Athens with Leonidas Koutikas in the Klimaka van night after night. Until last year, Zacharatos worked as an interior designer, earning up to €4,000 ($5,300) in a good month. "All of the sudden, boom, the crisis was here and 90 percent of the commissions were gone," he says. Zacharatos and two others sleep in a room above the Klimaka offices. The bunkbeds and veneer cabinet are reminiscent of a youth hostel.

Zacharatos says things happened very quickly. He lost his job, had no money to pay for his apartment, and within a few months he was out on the street. "Never in my worst nightmares would I have imagined that I would one day become homeless," he says.

At Klimaka, he not only has a roof over his head but also a new task. As part of a reintegration program, all residents of the institution have to take on a daily job. They cook, clean, or like Koutikas and Zacharatos, make the nightly drive to the favorite sleeping spots in greater Athens. Those spots are near the fancy promenades of Piraeus, a stone's throw from the parliament or in the middle of the tourist district near the Acropolis. Usually it takes just an informed look, and the Klimaka team has found its new "clientele." "We constantly see new faces," says Zacharatos.

'There are Always More'

As yet, there are no reliable estimates as to the numbers of the "new poor," because the appropriate studies are lacking. Families can also mitigate the severity of many financial crashes. Those who have lost their jobs or their homes find accommodations with relatives before they ever make it into official statistics. That is especially true of the youngest victims of the financial crisis. "But with the government's many new austerity measures, along with the tax burdens, it is questionable how long the families can continue doing that," says Stamatogiannopoulou.

What is clear is that in 2010, almost 28 percent of Greeks, or 3.03 million people, lived at risk of poverty or social exclusion, according to numbers released last week by the EU statistical agency Eurostat. With the recession only having deepened since, it seems likely that the number of poor Greeks rose in 2011.

Manos, who would prefer not to give his last name, is among the Greek poor. The man, in his mid-50's, is one of dozens of people to come to the Aghia Zoni church on a recent morning. "There are always more," says Father Immanuel, who has organized meals for the poor for 20 years. "Up until one or two years ago, we knew every face here. Today things are much different," he says.

The people in the church's courtyard are waiting for the cook Georgia to finally open the door. She has been at work in her kitchen in the church's basement for hours. When she opens the heavy steel door, there is a great rush to get in. Manos, too, gets noodle soup and bread. As he is eating, he tells a common story of losing his apartment and his job. He was born in lower-middle class Kypseli, an Athens neighborhood, and now he is sleeping in the cold on park benches. "I am a good salesman, honestly," he says. "I can sell anything." He then asks his German guest for his email address, and a few hours later he sends his resume with the request to pass it on. He hasn't given up.

The psychologist Eleni Bekiari knows what dark thoughts the crisis and its consequences have brought to Athenians. She staffs Klimaka's telephone number "1018." It is a 24-hour suicide hotline, and its statistics are clear. In 2010, there were about 2,500 calls made to the number. In 2011, there were twice as many. "Most of those who call us are women," she says. "On the other hand, it's usually the men who end up taking their lives."

Greece traditionally has one of the lowest suicide rates in Europe, but the increase has been dramatic. Since the beginning of the crisis, the suicide rate has almost doubled. In 2011, there were almost six suicides per 100,000 citizens. When the callers to the suicide hotline are asked for their reasons for suicidal thoughts, Bekiari says, they often answer with two words: the crisis.