Minutes after arriving in the northern Greek city of Serres, Kyriakos Mitsotakis is surrounded by ardent supporters. The leader of the conservative Nea Dimokratia party smiles contentedly, shakes hundreds of hands and is bombarded by requests for selfies every few meters.

The central square in Serres is teeming with people drinking coffee or enjoying the spring sun. Serres, a conservative stronghold and a city with close to 60,000 inhabitants, is one of many stops on Mitsotakis' seemingly endless campaign trail. It will lead him across the whole country before the European and local elections this Sunday. And the decisive national election for parliament will take place in the second half of the year.

Mitsotakis, 51, has come a long way since rising in January 2016 to become party leader of Nea Dimokratia, the country's most important opposition party. At the time, while he had long served as a member of Greek parliament, he was also known for being the son of former Prime Minister Konstantinos Mitsotakis, a behemoth in Greek politics. He was relatively young, had little experience in government and possessed few allies inside his party.

Three years later, he's ready to claim the big prize: He's currently the favorite to become the next Greek prime minister. The conservatives have been polling consistently ahead of incumbent Prime Minister Alexis Tsipras' left-wing governing party Syriza in all surveys. It's the first time in four years that Greeks have gone to the ballot box nationally, and Mitsotakis is calling it a "referendum" on Tsipras.

If Nea Dimokratia does return to power in the autumn, it would be an extraordinary turn of events. The anti-systemic wave that catapulted Tsipras and his Syriza party to power and annihilated the traditional center-left Pasok party never hit the conservatives.

'The Country Is Still Paying the Consequences'

"Countries and societies correct themselves," Mitsotakis tells DER SPIEGEL. "We have drifted toward populism, lies and incompetence. In Greek history, there have been many cases when, after a period of decay, something new was born." Mitsotakis describes the Tsipras administration as "Greece's worst government since 1974," the year democracy was restored after the military putsch against the seven-year junta.

At the same time, the overall record of the current government is not as bad as the polls would seem to suggest. Despite its left-wing populist political platforms, Tsipras has still met the requirements of the foreign creditor countries, and there is little left of his once radical positions on the euro and debt. He has taken steps toward freeing the highly indebted country from the burdens created by the bailout programs and regained some of the country's lost sovereignty.

The economy is growing again after almost a decade of recession and unemployment has been falling. European leaders, including Chancellor Angela Merkel, now value him as a reliable partner. On Wednesday, in the middle of the campaign, Tsipras announced tax breaks and a special payout for pensioners.

A reliable parter: German Chancellor Angela Merkal during her visit to Alexis Tsipras in Athens in January

Mitsotakis, on the other hand, accuses Tsipras and his government of having flirted in 2015 with Grexit and pulling out of the euro and then saddling the nation with a third rescue program. Both, he argues, were unnecessary and extremely expensive. "We may no longer be standing at the edge of the abyss," Mitsotakis said, "but the country is still paying the consequences for the first six months of 2015."

Harsh Criticism of the Incumbent

Indeed, despite the positive developments, the Greek economy is growing much more slowly than that of other countries that received bailouts during the crisis, like Ireland, Portugal and Cyprus. The country is also still having trouble selling its bonds at attractive prices, and it remains the subject of enhanced surveillance by its creditors. At around 180 percent of gross domestic product, the country has the highest sovereign debt ratio and, at more than 18 percent, the highest unemployment rate in the eurozone.

Mitsotakis claims that Tsipras has failed on the economy, "the issue that affects the lives of Greeks most. This is why 80% of voters believe Greece is heading in the wrong direction," Mitsotakis says. The main problem, he argues, is the quality of institutions and the implementation of genuine reforms. Here, Tsipras "has failed miserably," he says. He may have raised taxes to meet fiscal targets, he claims, but "investments were undermined and privatizations were implemented when forcedonly when they had to."

The conservative candidate plays down the importance of his lead in the polls, saying he will continue with his door-to-door campaign. "Direct contact with the people is the most reliable indicator that the country is ready for change," he says. The politician wants to use the tour to burnish his image. Tsipras is seen by many Greeks as the photogenic, charismatic and streetwise politician, whereas Mitsotakis is considered a well-protected scion of a political dynasty, a technocrat lacking in personal charisma.

The two men have little in common. Their politics, their world views and their life stories stand in direct contrast with each other. Tsipras went to public schools and graduated from a public university and grew up in a middle-class neighborhood in Athens. Mitsotakis went to the elite Athens College and also studied at Harvard and Stanford. In the early 1990s, Tsipras was a member of the Communist Youth of Greece and was a leading figure in the high school uprisings against the education reforms under Prime Minister Konstantinos Mitsotakis. At the time, the prime minister's son Kyriakos worked as a financial analyst for Chase Bank in London.

He believes a life immersed in politics has given him an advantage. "Power doesn't go to my head easily," he says. He also addresses the accusation that he is disconnected from ordinary Greeks by attempting to present himself as the guy next door. That tactic appears to be working. If you accompany him to campaign appearances in places like Serres, Thessaloniki or on the island of Lesbos, people call him by his first name.

Mitsotakis says his "secret ambition" for the EU election is that Nea Dimokratia will fare better than any other party within the European People's Party, the grouping of conservative parties in the European Parliament. He says that such a success would be a rebuke to populist politicians like Tsipras or Hungarian Prime Minister Viktor Orbán. "We will prove there is another way," he says. "That you don't have to be a populist, you don't have to be nationalist, you don't have to shoot Europe to achieve electoral success. Greece was the first country in the eurozone that experimented with populism. And it will be the first country to enter the post-populism age."

A Continuing Dispute with North Macedonia

But Mitsotakis himself has been accused of flirting with exactly this kind of populism. He and his conservatives reject the agreement that Greece signed in January with its neighbor North Macedonia to settle a nearly 20-year conflict over the use of the name Macedonia. The deal resulted in the Republic of Macedonia changing its name to North Macedonia. In the EU and NATO, the agreement has been welcomed as a diplomatic success that will help stabilize the Balkans.

Mitsotakis, though, has threatened to block North Macedonia's EU accession path as a result of the agreement. He argues that a name of such great cultural and historical importance to Greece has just been handed over to the country. Many see his stance as the cynical product of electoral calculation, dog whistling to Greek nationalism, but Mitsotakis rejects the notion. He insists the agreement is genuinely bad for Greek interests and that the negotiations carried out were "miserable." When he campaigns to voters on the street, he tells them the deal is very bad, but also legally binding.

There is an additional promise that Mitsotakis repeatedly makes that his critics don't believe he will be able to deliver on. He wants to renegotiate Greece's obligations to creditors. Athens has agreed to work toward achieving annual primary budget surpluses of 3.5 percent by 2022. And the country will not be allowed to incur any debts for decades to come.

"It is simply wrong to let Greece drown in such high surpluses," Mitsotakis says. "The main concern of Europeans is how to get their money back. And they will not get their money back if the economy is only growing by 1 percent a year." He wants to win the trust of international creditors by implementing a bold a reform and investment program and then ask for better conditions and more breathing room. But several top EU politicians have already said those conditions are non-negotiable.

If elected, Kyriakos Mitsotakis says he wants to break with a centuries-old tradition of favoritism in the country.

Many observers believe Mitsotakis is serious about his intentions, but they harbor doubts as to whether he can outperform Tsipras on the reform front. They often cite the empirical truth that many of the most important reforms in Greece have been the work of socialist or left-leaning administrations and not the conservatives.

In addition, Mitsotakis swears by meritocracy and pledges he will break with the centuries-old Greek tradition of favoritism -- though such promises are almost as old as the tradition itself. Tsipras pledged the same thing, but he and his ministers have been criticized repeatedly of hiring political friends for high-ranking positions. Mitsotakis has assured that his friends will not be provided with access to political power. But it remains unclear why it is necessary to elect the scion of a political dynasty to break with customs that are deeply anchored in society.

After the campaign stop in Serres, Mitsotakis returns to his hotel in the northern Greek city of Thessaloniki. The view from the rooftop garden is spectacular, overlooking the Aegean Sea and Mount Olympus, the country's highest mountain and the home of the ancient Greek gods.

Mitsotakis talks about two women he met in a small village near Serres. They told him that their children are learning foreign languages so that they can leave the country one day. Mitsotakis says he hears things like that all the time. "I want young Greeks to learn foreign languages as an asset, and if they do emigrate, then only by choice, not out of necessity."

Ultimately, he says, the measure of his success or failure if he becomes prime minister will be whether he has helped rebuild a country that doesn't push its children to move away. 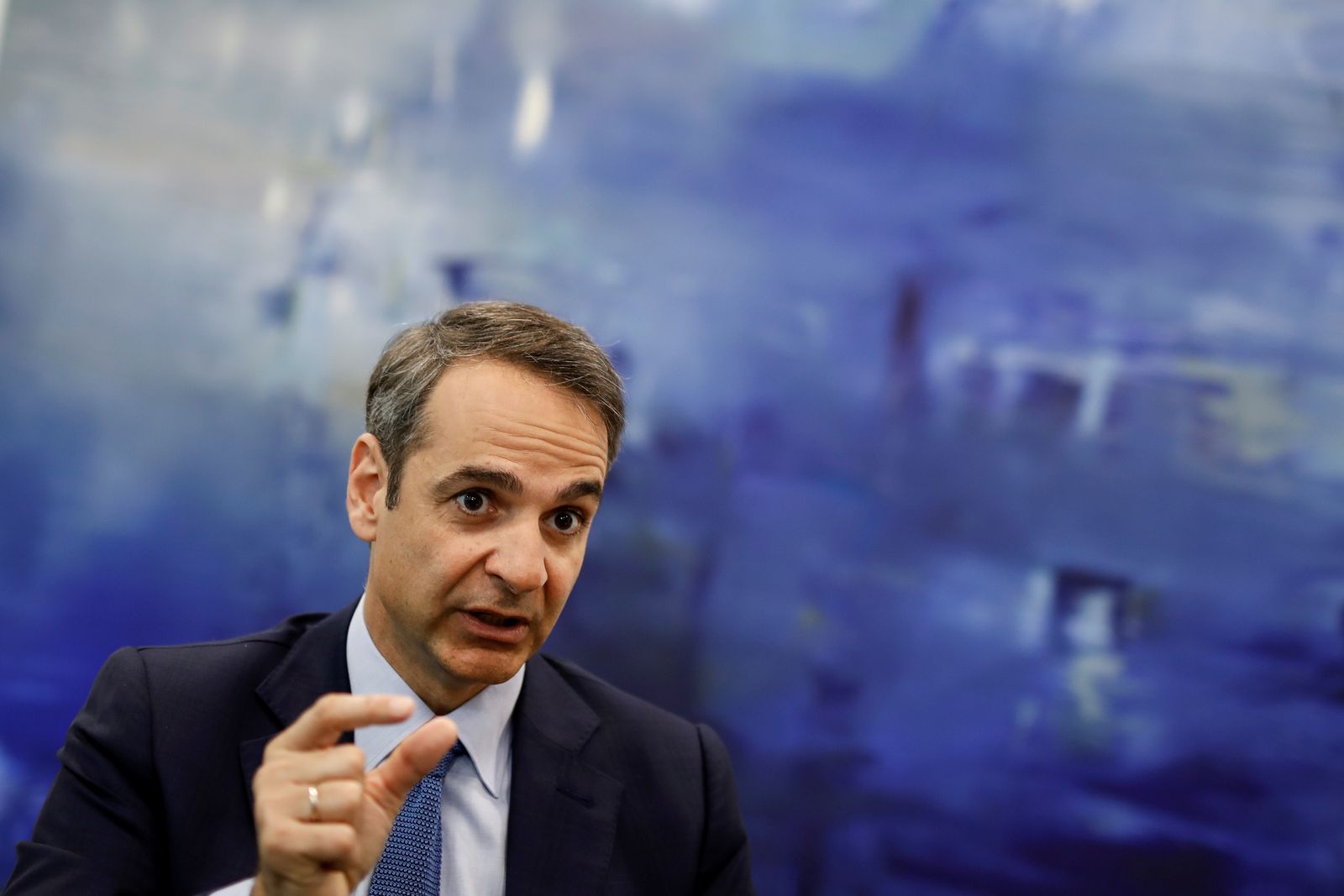 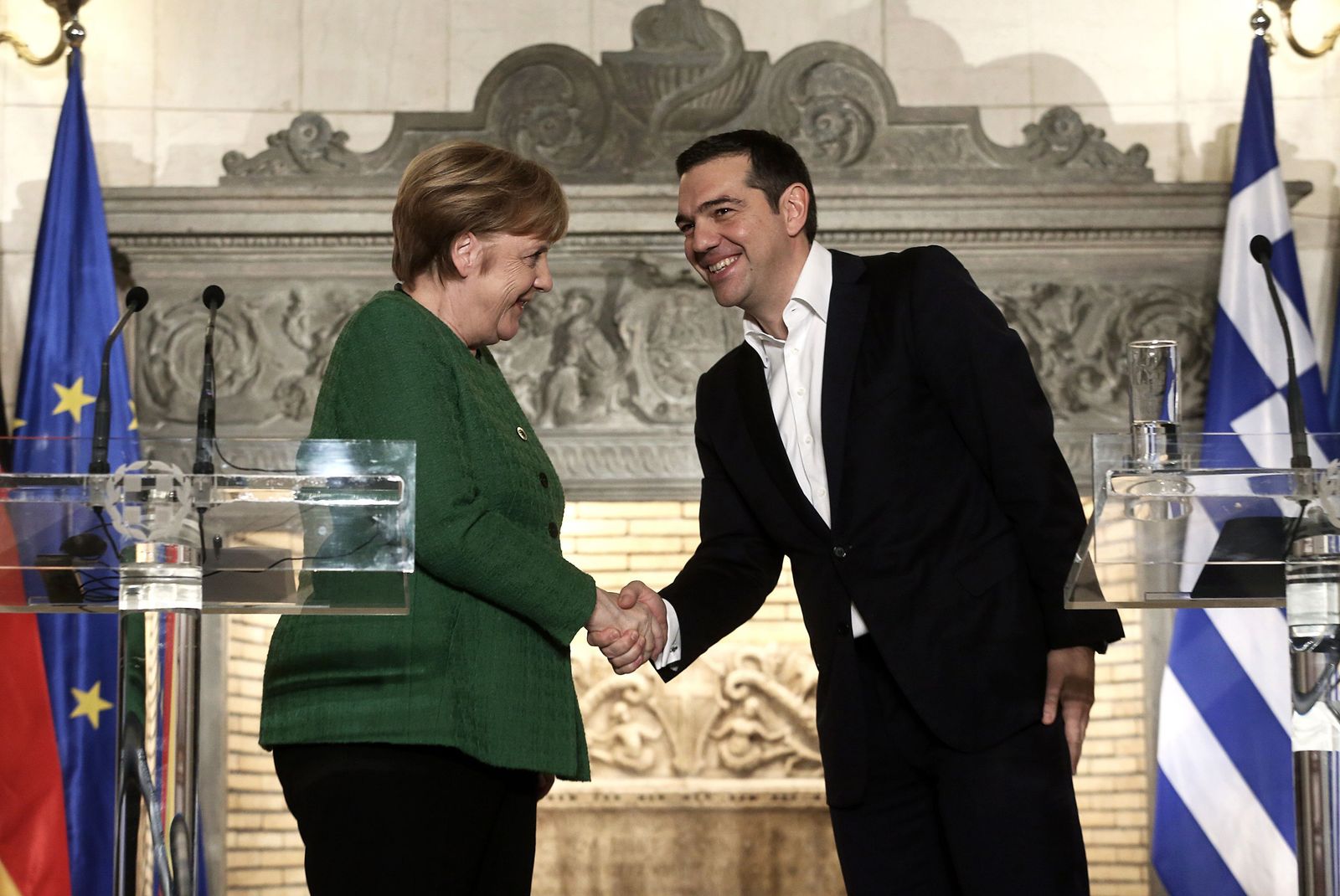 A reliable parter: German Chancellor Angela Merkal during her visit to Alexis Tsipras in Athens in January 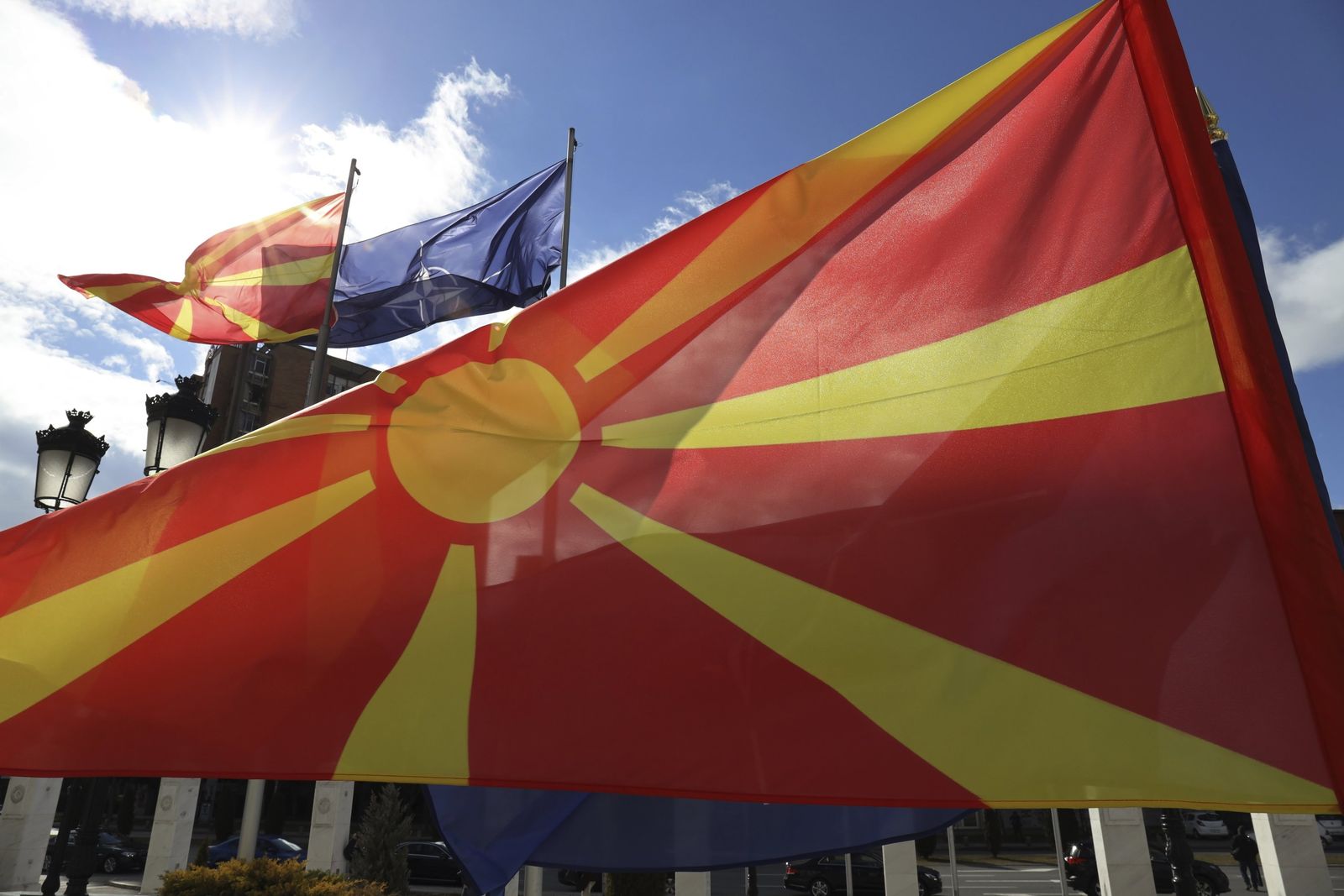 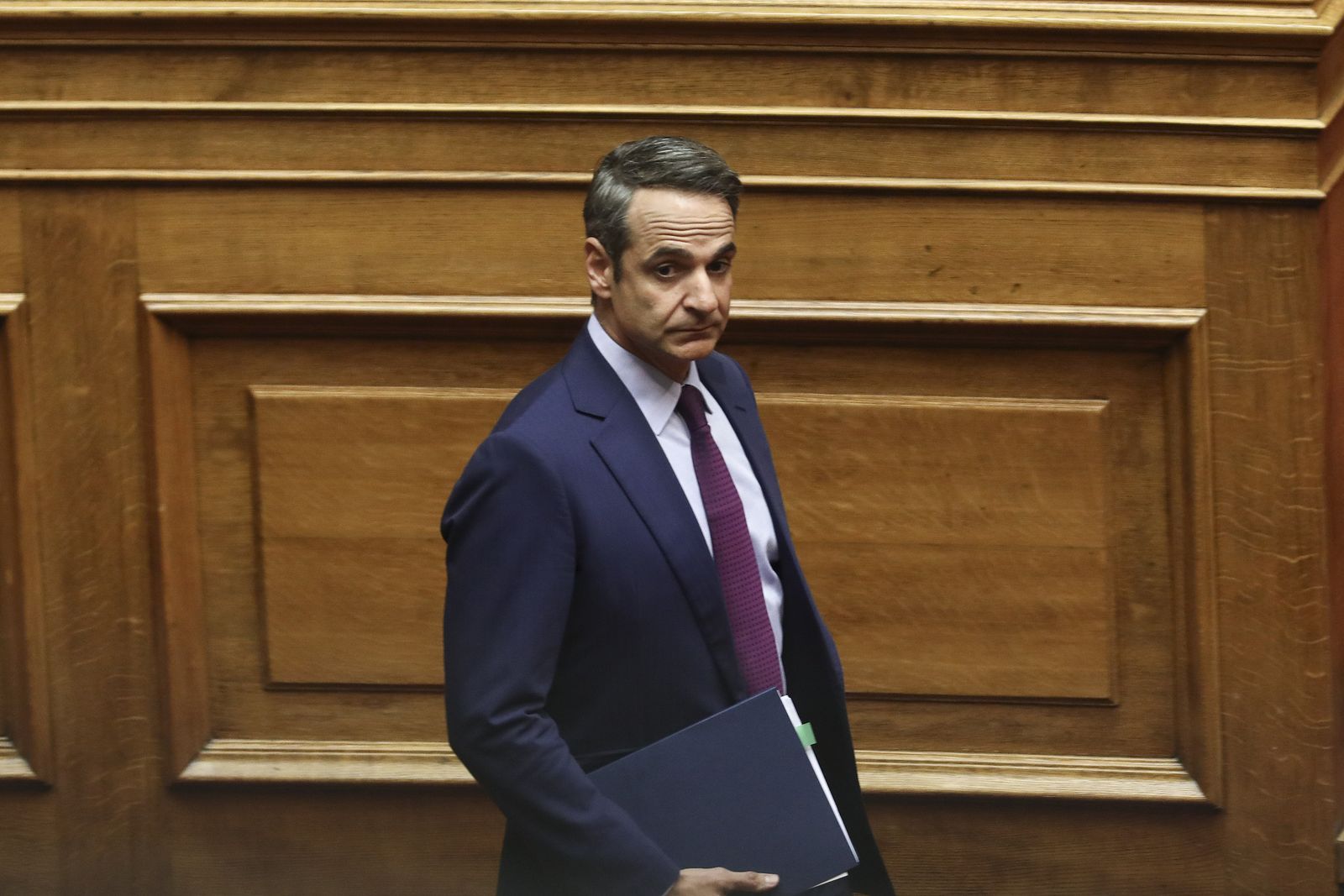 If elected, Kyriakos Mitsotakis says he wants to break with a centuries-old tradition of favoritism in the country.