Negotiations about the planned bailout for Cyprus from the European Stability Mechanism, the euro zone's permanent bailout fund, will likely not be completed until 2013, a spokesman for the German Finance Ministry said.

Cyprus had applied in June to become the fifth nation to receive a bailout in the euro crisis. But not much has happened since that first call for help. The talks between the Cypriot government and the troika, made up of the European Commission, the European Central Bank and the International Monetary Fund, have been stalled for weeks. There are no signs whatsoever that Cyprus is willing to commit to a serious austerity program, sources in Brussels said.

The talks could now be delayed by accusations that Cyprus is lax on money-laundering. According to information obtained by SPIEGEL and first reported on Monday, an internal study by the German foreign intelligence agency, the Bundesnachrichtendienst (BND), says banks in Cyprus hold $26 billion (€20.33 billion) in deposits by Russian investors. According to the BND, most of this money has been illegally moved abroad to evade Russian tax authorities. By Cypriot standards it's a tremendous sum given that the island's entire annual GDP amounts to €17 billion.

But Russia's crucial role for the Cypriot economy is well known. This mini-state with just 900,000 inhabitants is the biggest foreign direct investor in Russia thanks to its huge holdings of Russian money. It works like this: attracted by low tax rates, wealthy Russians transfer their money to Cyprus and then re-invest it in Russia via companies registered in Cyprus.

Opposition lawmakers from Germany's Social Democrat and Green parties have already called on the German government to broach the low corporate tax rate of 10 percent and the money-laundering accusations in the aid negotiations with Cyprus. The two parties have long been complaining about the tax haven in the Eastern Mediterranean. They want the ESM aid to be attached to strict conditions such as the creation of an EU task force to combat money laundering, similar to the task force set up for Greece. "It's time to exert pressure," said one SPD lawmaker.

The German Finance Ministry has given assurances that it will raise the issue. But the Euro Group, which includes the 17 euro-zone finance ministers, hasn't had a single in-depth discussion about Cyprus yet, say members. EU diplomats expect that several European finance ministers will insist on Cyprus taking effective steps against money laundering once the government has come up with a workable reform plan.

The problem played a role during the visit by German Economy Minister Philipp Rösler in Slovakia in August. Newly-elected Slovakian Prime Minister Robert Fico told Rösler that his country could imagine backing EU aid for Cyprus, but only if the island reveals the people investing their money there. Slovakia too wants to find out which wealthy Slovakians are using Cyprus to evade tax in their home country.

Ireland Also Refused to Hike Taxes -- And Still Got Aid

So far, the Cypriot government has tried to maintain the status quo by playing off the euro group against Russia. At European summits President Dimitris Christofias and his finance minister have told their colleagues that Cyprus can get help from Russia if the EU refuses aid. After all, the Kremlin wants the island's banking sector to remain intact to protect the Russia investments there. It helped out Cyprus once before, in 2011, when it granted a credit of €2.5 billion. But that money has now been used up and the Russian government appears reluctant to provide any more.

Christofias, a communist, is reluctant for domestic political reasons to accept EU aid because it would only be granted on condition that Cyprus undergo a three-year austerity program including a 15 percent cut in public sector wages and the sale of state-owned enterprises to the private sector. The EU also wants Cyprus to abolish the inflation-indexing of wages and the payment of an extra month's salary at the end of the year.

Cyprus faces a presidential election on February 17 and although Christof ias is not standing again, his party doesn't want to wreck its chances of staying in power.

The election is one of the reasons why officials in Brussels don't expect any progress in the aid talks before 2013. In addition, Christofias appears to be trying to secure direct aid for Cypriot banks from the ESM so that the help wouldn't have to be channelled through his creaking budget. But the German government says any direct banking aid won't be available before 2014 at the earliest.

It's uncertain whether Cyprus will end up with an EU task force against money laundering. It is even more unlikely that Cyprus will raise it corporate tax. After all, the EU bailed out a European tax haven once before. In 2010, Ireland got €85 billion. Germany wanted Ireland to raise its corporate tax rate above 12.5 percent. But the Irish government refused -- and got its way. 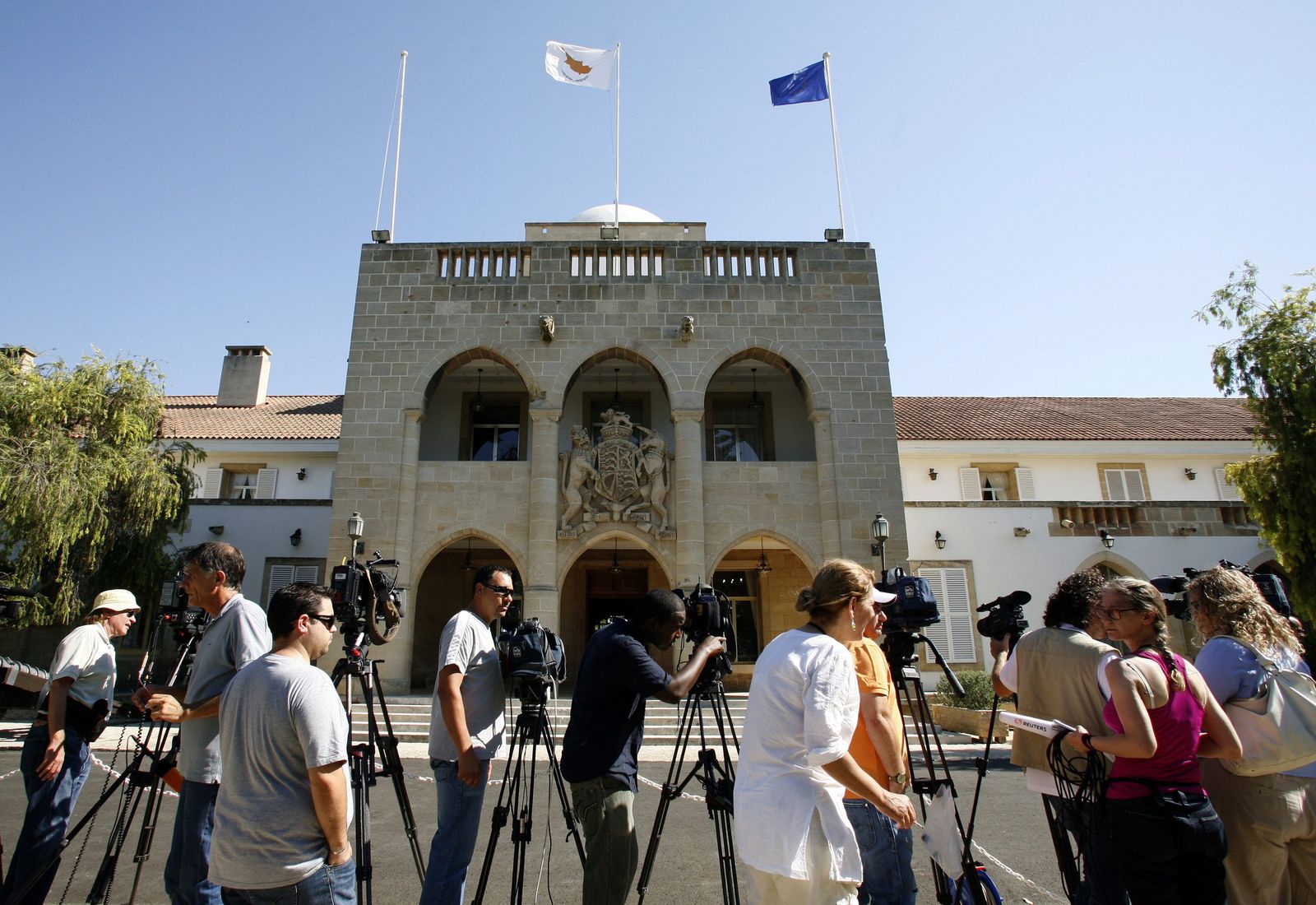 The presidential palace in Nikosia, Cyprus, which is in talks to receive a euro-zone bailout.