The key to getting your way in tough negotiations, of course, is to find your opponents Achilles' heel. Italian Prime Minister Mario Monti and Spanish Prime Minister Mariano Rajoy did that on Thursday night and early Friday morning in Brussels. And the result is a euro-zone agreement to allow the common currency bailout funds to give direct help to ailing banks and to become active on sovereign bond markets to provide relief on the financial markets -- free of conditions for the countries in need of such aid.

"We are opening the possibilities for countries that are well-behaving to make use of financial stability instruments, the EFSF and ESM, in order to reassure markets and get again some stability around some of the sovereign bonds of our member states," said European Council President Herman Van Rompuy at a 4:30 a.m. press conference, referring to the temporary bailout fund European Financial Stability Facility and the permanent fund European Stability Mechanism. 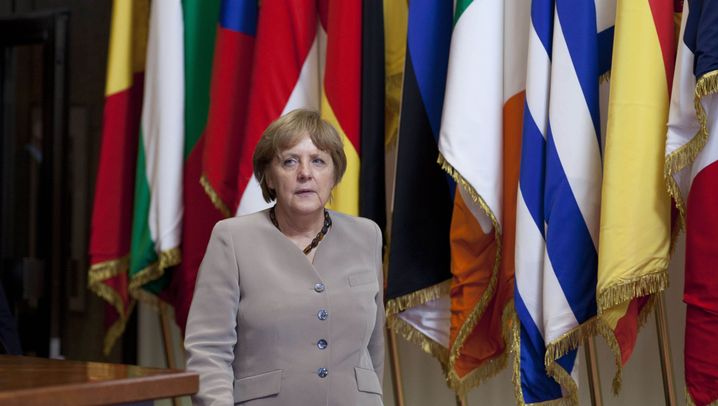 Monti and Rajoy were able to secure the immediate assistance they had been demanding by threatening to torpedo the €120 billion ($150 billion) European Union growth pact leaders had hoped to rubber stamp early on Thursday evening. Even if experts doubt whether the growth pact will have much of an effect, German Chancellor Angela Merkel had promised the successful passage of the pact to the opposition back home in exchange for their support in ratifying the ESM and the EU fiscal pact in parliamentary votes on Friday. Merkel is seeking a two-thirds majority for both measures to take the wind out of the sails of potential legal challenges at Germany's Constitutional Court.

The agreement will allow the ESM to recapitalize troubled banks directly instead of loaning the bailout aid to national governments in exchange for austerity commitments. That model had been called into question after the EU agreed recently to provide Spain with €100 billion to prop up its struggling banks. Investors, however, became nervous about Madrid's ability to shoulder that debt, and interest rates on Spain's sovereign bonds had skyrocketed in recent weeks.

In addition, emergency aid funds will in the future be made available to stabilize the bond markets without requiring countries, providing they are complying with EU budget rules, to adopt additional austerity measures. Prior to the summit, Merkel had been against both steps, preferring to stick to the rules that had already been hammered out and guaranteeing strict oversight.

Similarly, Merkel was not among the early initiators of the growth pact. French President François Hollande had promised voters during his recent presidential campaign that he would secure a growth component to complement Merkel's fiscal pact. Despite widespread EU agreement on the growth pact -- made possible by the fact that it involves a reshuffling of already available funds, rather than new commitments -- it provided a convenient lever for Monti and Rajoy to get what they wanted.

Still, Merkel tried to put a positive spin on the Friday morning results. "We made a good decision today, in particular concerning growth and combating unemployment and also on future measures for the EFSF and ESM," Merkel said. "We will continue to work on long-term measures."

Those long-term measures are Merkel's primary concern. On Friday morning, EU leaders are to resume meeting to discuss a timeline toward the creation of a banking union which would provide centralized European oversight over systemically important banks and create a euro-zone wide deposit insurance regime. Merkel would also like to see steps taken toward further political and economic integration across the euro zone to provide the common currency with the framework it needs to survive.

A detailed proposal on how a banking union might look is to be presented in the autumn by the so-called Gang of Four, made up of Van Rompuy and the heads of the European Commission, European Central Bank and Euro Group.

"The aim is, of course, to make the euro an irreversible project," Van Rompuy said.