This is clearly not one of his favorite issues to discuss. Nicolas Sarkozy lowered his head and stared at the paper in front of him on the lectern. "Behind the emancipation of women, the drive for education and training, the economic dynamism, the emergence of a middle class -- there was despair, a suffering, a sense of suffocation," he said. "We have to recognize that we underestimated this." There had been unbearable corruption in Tunisia, he added.

At a press conference on Monday, the French president went into damage-control mode. For years, France and the European Union have courted former Tunisian dictator Zine El Abidine Ben Ali -- and damaged their reputations in the process. They pursued economic and security interests, but ignored human rights.

As Tunisians took to the streets by the thousands in protest, they couldn't count on any support from Europe. Only days before he fled, French Foreign Minister Michèle Alliot-Marie said she wanted to lend the "knowhow" of French police to help Ben Ali maintain order, even after police had fired on protesters. Her colleague, Culture Minister Frédéric Mitterand, said the country was not an "unequivocal dictatorship," and suggested that describing Ben Ali as a dictator was "completely exaggerated."

"The Europeans did what the French wanted. They thought that Ben Ali would be a bulwark against terrorism and that's why they had to accept his dictatorship," said Daniel Cohn-Bendit, the head of the Green Party in the European Parliament. Even as the pressure continued to mount on Ben Ali, the best the EU member states could come up with was an agreement to continue to follow the developments more closely. Within hours, Ben Ali had fled. The EU's role never went beyond monitoring the situation from afar.

The EU's Hard as Nails Pursuit of Own Interests

Now critical voices are growing within the EU, with demands for a shift in policy. In hindsight, it had been a mistake to back authoritarian regimes, said Rainer Stinner, a foreign policy expert with the business-friendly Free Democratic Party (FDP) in the German parliament. He said EU countries had placed too great an emphasis on stability while giving human rights short shrift. Ruprecht Polenz, the foreign policy spokesman in parliment for Chancellor Angela Merkel's conservative Christian Democratic Union, also conceded that fears of Islamists had led to the wrong policies for the North Africa region. Speaking to the Rheinische Post newspaper, he said: "We need a strategy that promotes freedom and rule of law."

But what would this policy entail? The European Union is based on values like democracy, the rule of law, human rights, basic freedoms that are all anchored in the Lisbon Treaty, and the EU's strategy with the North African nations has also been based those principles. The problem is that the EU hasn't pushed them very hard. "The EU is considered a force of good, but what it actually engages in is hard as nails pursuit of its own interests," says Annegret Bendiek, an EU foreign policy expert at the German Institute for International and Security Affairs (SWP) in Berlin. "The EU has to ask itself whether it wants to work together with countries where human rights are trampled on." Bendiek said it was important for the EU to be more determined in its approach. "Muddling through as they have done up until now will not lead to more effective policies," she said.

Scandinavian countries, in particular, are interested in clear words from the EU and will be pushing for a greater observance of human rights. And the Maghreb issue is likely to be on the agenda at the next meeting of the EU foreign ministers on Jan. 31.

How Much Sway Does EU Have in North Africa?

The European Union could soon face the next test. Trouble is also brewing in Tunisia's neighboring country. On Sunday, a man died in Algeria after setting himself on fire. A similar act of self-immolation sparked the Tunisian insurgency in December. Opposition groups in Algeria have already been protesting for weeks, pushing for democracy and the lifting of a national state of emergency that has been in effect ever since it was imposed in 1992. On Sunday, police used force to break up a protest leaving dozens of people injured.

There were protests in Yemen as well over the weekend. Thousands demonstrated in the capital Sana'a demanding the resignation of President Ali Abdullah Saleh, who has ruled the country for the past 32 years. On Friday, demonstrators were out in several Jordanian cities too, pushing for an end to the government there.

Still, it is unclear whether the European Union has the political clout to apply pressure in many countries in the region. When it came to Tunisia, the lever was clear: 73 percent of Tunisian exports end up in the EU while 72 percent of the country's imports come from the bloc. Brussels, however, showed little interest in promoting democracy and human rights in the country.

With countries like Libya, Algeria and Jordan, however, EU economic ties are not strong enough to exert much pressure. Plus, the EU relies on oil and gas deliveries from many countries in the region.

Plus, when it comes to Libya, the EU hasn't proven overly concerned with human rights issues. President Moammar Gadhafi, an international pariah just a few years ago, is seen in Brussels as a vital ally in the attempt to reduce illegal immigration across the Mediterranean from Africa. Indeed, human rights activists have recently been highly critical of EU negotiations with Tripoli aimed at an agreement whereby Libya would take back refugees apprehended in the Mediterranean. But conditions in refugee camps in Libya, say activists, are atrocious: Would-be emigrants are thrown into overpopulated prisons and often abused. Recently, the European Parliament managed to put a halt to further talks between the EU and Libya.

It comes down to a conflict between values and realpolitik. It is unlikely that the EU will radically change its approach to the Middle East. Still, European Commissioner Stefan Füle, who is responsible for the EU Neighborhood Policy, which maintains diplomatic and economic programs with 16 neighboring states, regards respect for human rights as extremely important, Bendiek points out.

Cohn-Bendit, for his part, is more skeptical. "Mr. Füle has good intentions, but he doesn't have much freedom to act." More important, Cohn-Bendit says, would be a clear pledge to support human rights. "It is difficult to take a clear position," he says. "But it is unavoidable." 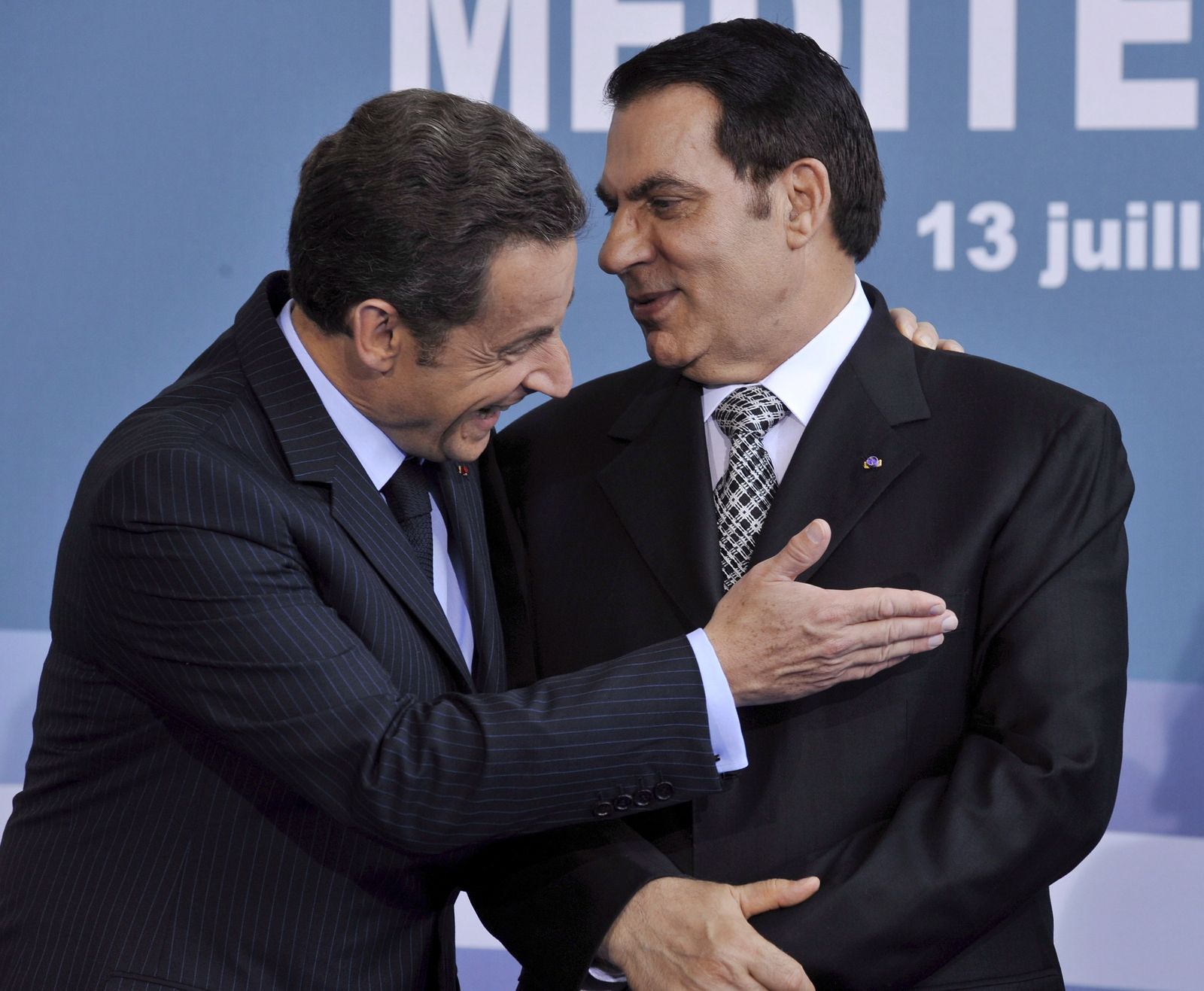 French President Nicolas Sarkozy in a 2008 meeting with former Tunisian President Zine El Abidine Ben Ali: "There was despair, a suffering, a sense of suffocation. We have to recognize that we underestimated this."