Austrian Finance Minister Josef Pröll felt tired but jubilant when he returned to his hotel on Place Jourdan in Brussels late last Monday evening. For hours on end, he and his European counterparts had been given a detailed presentation by European Council President Herman Van Rompuy and his task force on how the shaky monetary union could be stabilized and crisis-ridden Europe could be put back into shape.

The finance ministers listened attentively before going on to discuss the issue. But instead of rushing headlong into the usual squabbling session, a cozy feeling of harmony spread through the conference room.

German Finance Minister Wolfgang Schäuble found words of praise for his new "highly constructive" British counterpart, Chancellor of the Exchequer George Osborne. Osborne, who has a reputation as a euroskeptic, in turn described Brussels' plans, which London had until then rigorously opposed, as "not bad."

Afterwards, over a glass of red wine at the hotel bar, Austria's Pröll, who has always been somewhat critical of Brussels, enthusiastically said that the EU is more or less implementing "what we have been discussing for years." He said that the European Union was about to take a "quantum leap" that will "fundamentally change Europe."

The politicians appear to be determined to make up for what they have neglected in the past. A monetary union cannot succeed in the long term if every member state simply pursues the economic policies that suit its own interests. This is something that economists have always known, but it has never been politically feasible: Euro-zone member states were not prepared to relinquish more power to Brussels.

That has changed since the euro crisis shook the monetary union and the realization sank in that things cannot continue as they are. Suddenly there is talk of an "economic union" and even the necessity of an "economic government," yet there is no sign of the usual outcry.

At the meeting last Monday, finance ministers said again and again that "more Europe" is needed -- and for the first time, most of those present apparently meant it.

The next day, the finance ministers launched a series of ambitious initiatives. They decided to establish a trio of agencies to regulate European banking and stock markets and to initiate a joint financial policy. On Thursday of this week, European heads of state and government will meet in the Belgian capital to discuss the next steps. Furthermore, before they gather for their subsequent summit meeting in late October, EU leaders intend to put together a complete program to make the European Union stable and secure for the future.

The proposals that Rompuy's task force and the experts from the European Commission have already compiled are listed in a confidential document drawn up for an EU prime minister. They consist of 10 pages, jam-packed with additional procedures, new regulations and severe threats of penalties. Measures range from tightening up the Stability Pact and reducing "excessive inequalities" in Europe's economies, to controlling and taxing the banking sector and monitoring national budgets.

According to the usual political reflexes, such regulatory excesses by Brussels' eurocrats would normally immediately lead to trouble. There's not much indication of that this time around, though -- in fact, the report's "conclusions" state that in Europe's capital cities there is a feeling of belonging to "a community that shares a common destiny." It goes on to say that those who distance themselves from this new sense of public spirit will find themselves "increasingly isolated."

Berlin is also striking a similar -- and equally unusual -- tone these days. Suddenly the government is sounding self-critical. "A common currency places greater demands on us than we had originally thought," said an official in the Finance Ministry. Up until now, no matter who was in power, whether it was Gerhard Schröder or Angela Merkel, the Germans have preferred to keep the core areas of their financial and economic policies out of the hands of the EU.

The EU has come further over the past few months "than over the past 10 years," says a delighted Jean-Claude Juncker, prime minister of Luxembourg. Indeed, European Commission President José Manuel Barroso is already rhapsodizing that the monetary union is now underpinned "by a genuine economic union."

The new enthusiasm for European solutions arises from sheer fear. "We have seen the abyss, and it has changed us," says Austrian Finance Minister Pröll. He says that no head of government or finance minister can forget the weekend of May 7-9 this year. Greece stood at the brink of bankruptcy and other countries were starting to teeter. A bankruptcy would have dragged down other countries and possibly torn apart the monetary union. Hundreds of billions of euros had to be scraped together overnight to prevent a continental meltdown. "During these hours," says Pröll, "a new European community was born."

The fear persists and the crisis is far from over. Skyrocketing interest rates for government bonds issued by countries like Portugal and Ireland are proof that markets are still extremely nervous. The markets are still anxiously wondering whether the Europeans can continue over the long term to service their colossal debts when their economies are losing ground against competitors around the globe. There is apparently a widely accepted realization that no country can meet this challenge alone.

With all of these projects, the intention is not to replace national areas of responsibility with an EU superstructure, but rather to complement these competencies in certain, very clearly defined, situations. For example, it has been proposed that national regulatory agencies will generally remain responsible for monitoring financial transactions on their territory. In addition, the European Central Bank in Frankfurt will monitor the EU's entire financial system.

The three new EU agencies for regulating banks, insurance companies and stock exchanges, which the finance ministers have now decided to establish, will keep an eye on cross-border transactions and, in an emergency, completely take over responsibility for crisis management. Nevertheless, only the national finance ministers can activate the emergency alarm.

The European club members are even prepared to allow their neighbors to have a say in their national budgets, which have until now always been strictly off-limits to outsiders. According to the new plan, each spring, every country will present in Brussels its budget planning for the following year and its financial planning for the next five years -- in other words, long before the national parliaments have debated the budgets.

Experts from the Commission and other EU states will then examine every document and assess whether it complies with the regulations of the Stability Pact and whether the budgetary policies are compatible with EU principles. Is excessive government debt being reduced? Are investments in sustainable energy sufficient? Are significant reforms in the pension system or the labor market being implemented? If not, there will be finger-wagging, followed by warnings and, if necessary, hefty fines.

The exact nature of these penalties remains just as contentious as many other details. But, in principle, the budget controls -- known in EU jargon as the "European semester" -- are a done deal. This means an "enormous shift of power" from the nation states to Brussels, said Italian Economy Minister Giulio Tremonti, as he summed up the planned measures during a public statement.

In the old days, he would have been one of those storming the barricades in protest. Now he's part of the process. 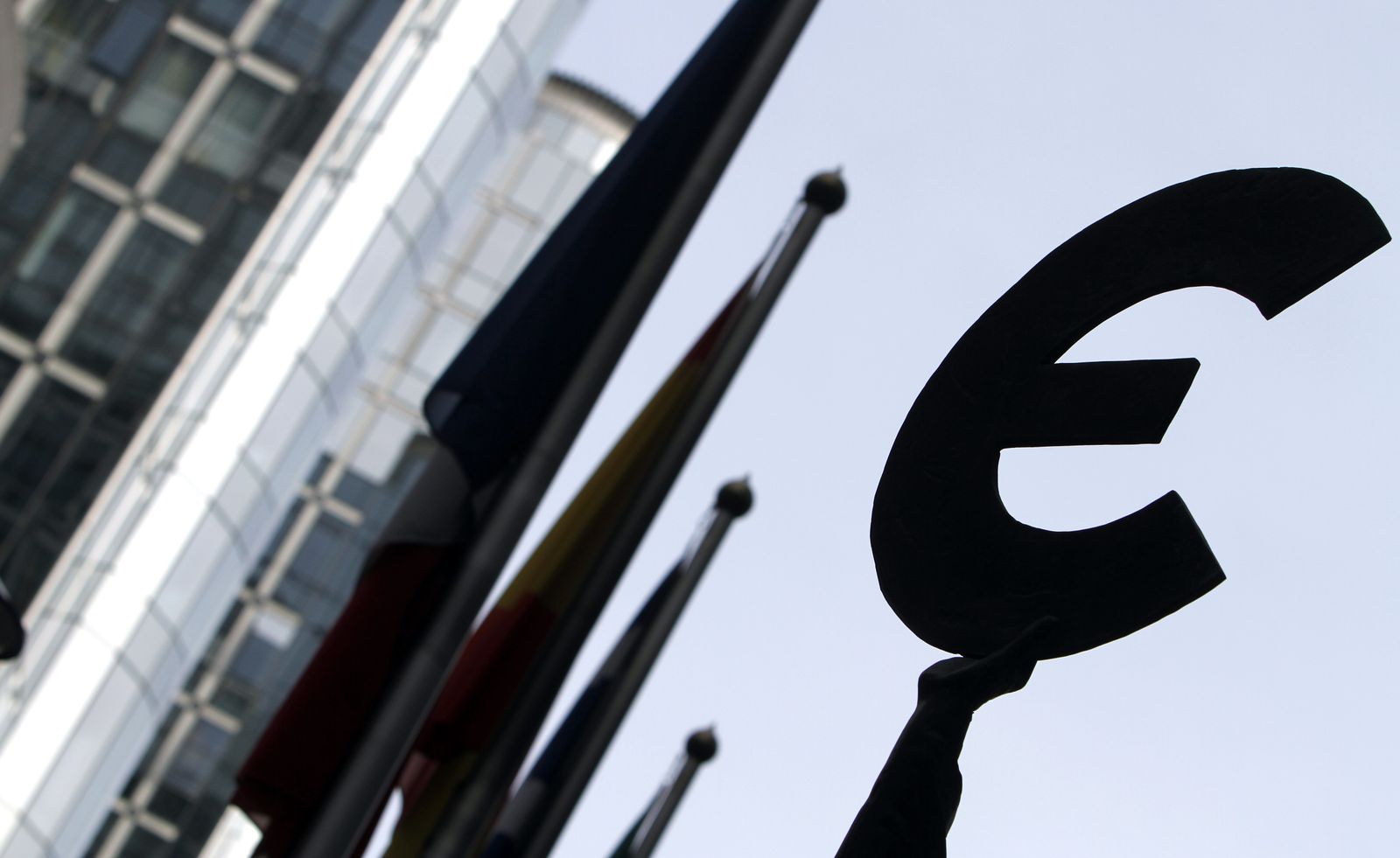 A euro-themed statue outside the European Parliament in Brussels: European Union leaders have finally put aside national interests to push through Europe-wide financial reforms.