Last week's European Union summit has created more problems than it has solved. By agreeing to enter into a fiscal compact that would tighten control over national budgets and enact automatic sanctions against deficit offenders, the heads of state and government who make up the European Council have left the solid ground of EU law and entered into uncharted legal territory.

With British Prime Minister David Cameron unwilling to join the other EU member states in modifying the Lisbon Treaty to allow Brussels greater influence over member states' budgets, the rest of the summit participants agreed to enter into a new treaty entirely, one without the United Kingdom. The negotiations over this "17-plus treaty," which will include all countries within the euro zone as well as other willing EU members, are supposed to be completed by March.

Those who sign the treaty will pledge to keep their own budgets in order, with a maximum structural deficit of 0.5 percent of gross domestic product per year and so-called "debt brakes" anchored in national constitutions to automatically correct any violations of that limit. Those who sign up will also agree to subject themselves to a tough sanctions mechanism if their budgets get out of control, with the European Commission required to impose harsh penalties on states that violate the terms of the pact -- unless a qualified majority of EU members supports making an exception in a particular case. In return, crisis-stricken countries that apply for an EU bailout will be obliged to submit their national budgets to Brussels for approval.

But is that all even possible? Can a majority of EU states simply bow out of a common EU treaty and agree on something new instead? David Cameron, no longer part of the new club, has stated that he doesn't accept the other member states' decision to go it alone, but those on the Continent seem unperturbed. This is not the first time that EU member states have agreed on special treaties that are not signed by all members. The Schengen Agreement, for example, which removed border controls among most but not all EU states, was another case in which London declined to participate. And the example of the European Social Charter offers proof that a decision to opt out doesn't need to be permanent. This treaty, too, was originally adopted without British participation, but would later be signed by former UK Prime Minister Tony Blair.

Not the Optimal Solution

In the opinion of Christian Calliess, a professor of European law at Berlin's Free University, such "additions" to the EU treaties may not be "the optimal solution," but they are "a viable way" to move the European project forward. The problem is that such additions don't rest on a firm legal foundation, a fact that could come dramatically to light if disagreements should arise. What will happen, for example, if one country refuses to accept the Commission's deficit penalties on the grounds that such measures aren't stipulated in the Lisbon Treaty? Would that country's signature on the stricter 17-plus treaty be sufficient to enforce the penalties?

Such a conflict touches on a problem that has dogged the EU for years: Which is more powerful, EU law or international law? Can agreements between individual countries, such as a 17-plus treaty, change EU law? If not, an agreement such as the one reached last Friday at the EU summit remains essentially nothing more than a nonbinding statement of intent on the part of the euro-zone countries and the other, voluntary participants.

Europe's €64,000 question -- whether agreements that deviate from official EU treaties can even be made binding -- has received a clear "no" from the European Commission. No surprises there. Prior to the summit, EU legal experts had warned Germany that Angela Merkel shouldn't count on being able to establish a separate treaty in the event that the UK declined to participate.

Still, those well versed in European law see the matter differently. "There have been examples of special legal agreements among EU member states throughout the history of European integration, up to and including the euro bailout funds," says Calliess, the Berlin-based professor. "There's no reason to prevent such an agreement, and the 17-plus states, at least, are bound to it. In this respect, it's not even a question of the precedence of EU primary law over treaties adopted under international law," he says.

Who Has the Say?

The disagreement over the significance of special agreements such as this one continues when it comes to the question of whether the European Commission, the EU's executive arm, can be charged with enforcing international agreements outside the scope of EU law. What will happen if Brussels takes the position that such treaties are matters that concern Angela Merkel or Nicolas Sarkozy, but not the EU as a whole? And what will happen if the Commission refuses to enact measures against deficit offenders and Germany, say, then takes the matter to the European Court of Justice? Will the court then reject the case, arguing that it does not have jurisdiction over such special agreements?

This would indeed be welcome if it were to lend additional democratic legitimation to an international treaty. But what happens then with the British members of the European Parliament? Will they have to leave the chamber during the negotiations? Why not, say some familiar with European democracy. Members of the European Parliament, they point out, represent both Europe's citizens as a whole as well as the citizens of their own countries. In that second function, at least, the British representatives would have no place in these negotiations.

By this point at the latest, the citizens of the Europe would give up trying to understand their distant EU representatives. No matter what nationality they belong to, they would once again throw up their hands in the face of the squabbling and opaque dealings that characterize European politics. Their inevitable conclusion? They're all nuts in Brussels.

Whether the decisions reached at last week's summit truly spell progress in terms of European unity may seem like an academic question now, at the height of the financial crisis. In Germany, however, it represents a serious problem in terms of constitutional law. According to the German constitution, if this special treaty is indeed a "matter concerning the European Union," then both of Germany's legislative chambers -- the parliament, or Bundestag, and the Bundesrat, which represents the federal states -- have the right to an extensive say. In that case, if Angela Merkel had been hoping for a quick silver bullet to solve the euro crisis, then she will be disappointed. From now on, Germany's federal states and all members of the Bundestag would need to be informed of Merkel's plans, and their opinions would need to be taken into account during the treaty negotiations. It would be a situation that the crisis managers in the German Chancellery would be only too glad to avoid.

This makes it appealing for the German government to treat the pact precisely as it actually is, namely, a run-of-the-mill international agreement that has nothing to do with European law. In this case, which is actually the normal situation, the German constitution allows a fast-track process: The final treaty needs to be ratified -- or not -- by the Bundestag after it has been signed, according to the principle of take it or leave it. The parliament would have no right to influence the contents of the actual treaty.

Take it or leave it: That has been Berlin's preferred approach up to now. The German government did not consider either the treaty on the European Stability Mechanism or the existing Euro Plus Pact (adopted at an EU summit in March 2011) as "matters concerning the European Union" in the sense of the German constitution. In doing so, it largely denied the Bundestag any say. The reasoning was that these were not matters of European law but, rather, intergovernmental agreements.

The government is likely to proceed differently this time, though. That's thanks to the German Green Party. The Greens objected to the way Angela Merkel sidelined the Bundestag when it came to her intergovernmental approach to managing the euro crisis. It took those complaints to Germany's Federal Constitutional Court, demanding that the Bundestag be involved from the start. The court's decision is expected soon, and a ruling in favor of the Green Party parliamentarians looks likely. European law specialists such as Christian Calliess have long maintained that the Bundestag must be involved in such treaties from the start. In reality, he argues, such agreements between the governments of different EU states increasingly deal with "European domestic policy issues." In that respect, the Bundestag needs to be involved at an earlier stage, just as it would be if it was German domestic policy.

Meanwhile, the Bundestag itself is plagued by entirely different concerns. Bundestag President Norbert Lammert has announced that he is "taking a careful look at possible constitutional problems" that could arise as a result of a treaty that allows interference with that most sacred of parliamentary rights -- the right to approve the national budget. As it happens, in its recent ruling on the euro bailout fund, the Federal Constitutional Court stated that the Bundestag could not surrender responsibility for the nation's finances -- including not to Brussels.

However, if the treaty does grant the European Commission the power to intervene in the national budgets of deficit offenders, then not even the Federal Constitutional Court will be able to object if the offender in question is Germany. "Such interventions alone would not represent a violation of national sovereignty," says Frank Schorkopf, a professor of European law at Göttingen University who is an expert on the Constitutional Court's rulings on EU matters. Calliess, the Berlin-based professor, also argues that giving Brussels the power to oversee budgets would primarily serve a goal the court itself acknowledged, in its 1993 ruling on the Maastricht Treaty, as having constitutional status: the stability of the common currency.

In fact, German constitutional law specialists are more worried about the plan, agreed on at the summit, for member states to commit to incorporating a "debt brake" based on the Commission's guidelines into their constitutions, together with an automatic mechanism that would reverse any violations of the deficit limit.

It remains to be seen precisely what such an anti-debt mechanism would look like. One possibility is that the country's constitution would define any national budget act that creates too large a deficit as partially invalid. Whatever the case, the debt brake that was anchored in Germany's constitution in a 2009 amendment is a long way from meeting such requirements. Hence the 17-plus treaty could force Germany to finally incorporate a true balanced-budget provision into its constitution, rather than the current weak model.

Will the result be a fully automatic, reliable, irrevocable and inescapable debt brake, designed according to the latest specifications from Brussels and anchored in Germany's constitution? If "more Europe" means getting such a marvelous invention from Brussels shoehorned into the constitution, then most German experts agree it would be unconstitutional. 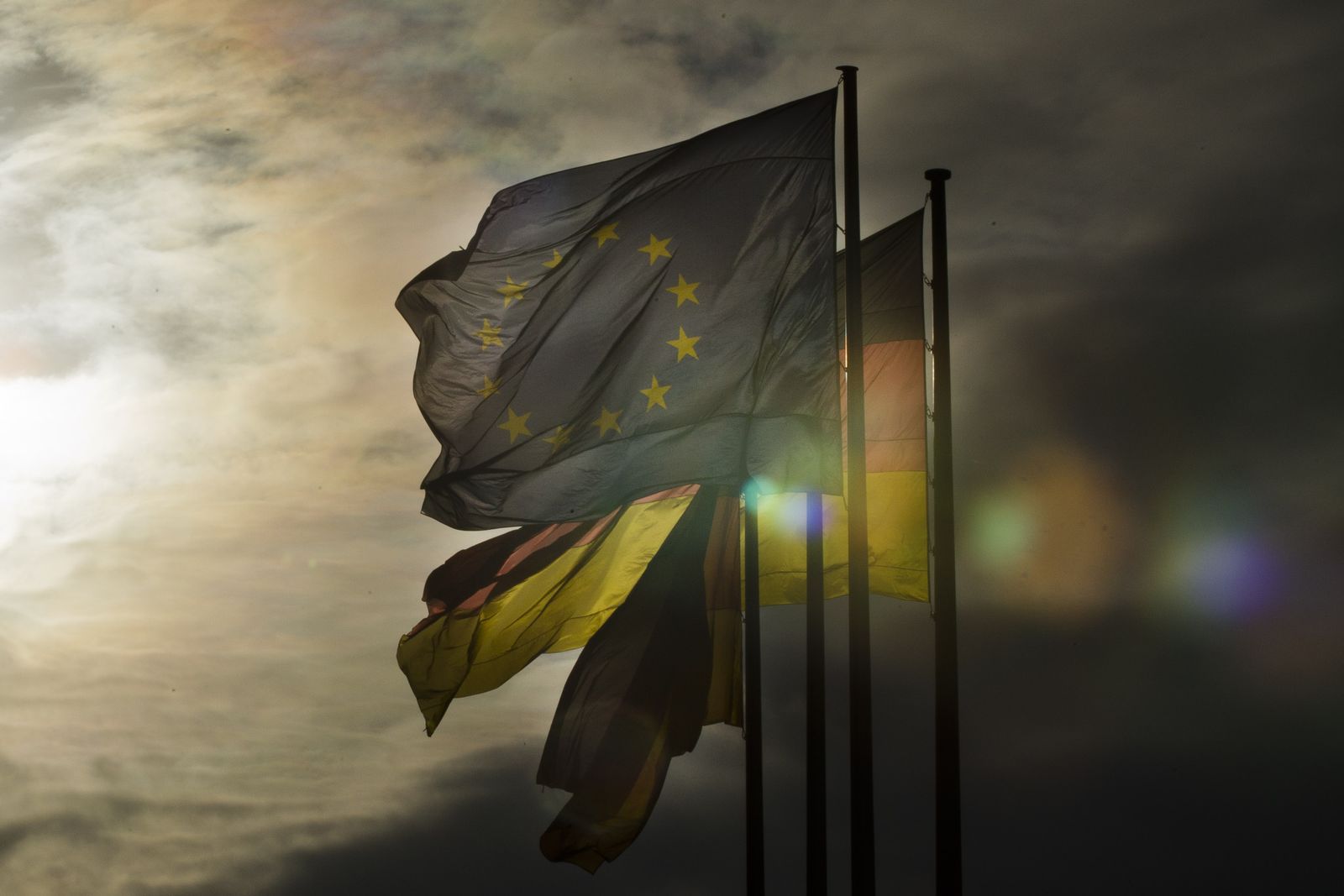 Flags in Berlin's government district: New plans for a European fiscal compact could cause headaches for the German government.