Up until just a few months ago, it wasn't easy to find people on the Continent who were seriously skeptical about the euro. The European common currency had performed well during the financial crisis and had steadily strengthened against the dollar. Indeed, the only concern was that the dollar would become too weak, thus making euro zone exports unaffordable.

With Greek finances a shambles, however, the weaknesses of the common currency regime have been exposed for all to see this winter. First among them: there is no policy tool to mandate fiscal responsibility in the 16 countries that use the euro -- a significant Achilles' heel for the currency's stability.

With Greece dragging the euro down, however, the concept of an economic government for the euro zone is gaining momentum. Indeed, the German and French Finance Ministries have developed a draft plan that would significantly strengthen financial policy cooperation in the EU.

The plan, which has been seen by SPIEGEL, calls for increased monitoring of individual member states' competitiveness so that action can be taken early on should problems emerge. States which have pegged their currencies to the euro -- like Denmark or the Baltic countries -- will likewise be monitored.

The plan also calls for the European Commission to ensure that the euro group spends more time addressing the finances of its member states. In particular, the paper demands that euro group finance ministers "take more time for candid and serious discussions on the goal of a functioning currency union." German Finance Minister Wolfgang Schäuble and French Finance Minister Christine Lagarde have sent their plan to Luxembourg Prime Minister Jean-Claude Juncker, who chairs the euro group. The idea is to be discussed at the next meeting of euro zone finance ministers in mid-March.

In a Monday interview with the German business daily Handelsblatt, Juncker voiced support for the idea of greater economic oversight of euro zone members. "We need a European economic government in the sense of strengthened coordination of economic policy within the euro zone," he said. "The Greece case makes it clear."

Juncker said that the euro group will examine divergences in the competitiveness of euro zone countries in March. Recommendations for reform will then be transmitted to each country with the expectation that national governments will formulate proposals to eliminate those divergences. The euro zone, Juncker said, will closely monitor the process.

Many have pointed to a lack of common financial policy among countries belonging to the European common currency as a significant weakness for the euro. Indeed, Greece's current problems, which include a budget deficit of 12.7 percent of gross domestic product and €300 billion in sovereign debt, have led to a significant weakening of the euro against the dollar. Furthermore, after years of at times painful social reforms in countries like Germany, the willingness in Europe to come to Greece's aid is tepid at best.

An early idea for a common European economic policy, voiced by European Commission President Jose Manuel Barroso in early February, called for forcing countries to institute structural reforms under pain of financial sanctions. Greece currently finds itself in a comparable position, with the EU closely monitoring Greek reforms and demanding deep spending cuts. Greece aims to cut its budget deficit by four percentage points this year with the eventual goal of dropping below the euro zone ceiling of 3 percent by 2012.

In a syndicated column, former German Foreign Minister Joschka Fischer also threw his support behind a European economic government. "The euro, which turned out to be the critical tool for defending European interests in this crisis, will now be subjected to an endurance test directed at the soft political heart of its construction," Fischer wrote. He urges that the French and German governments establish a financial oversight body with the teeth to assert control over the finances of member states.

"What is necessary now," he writes, "is statesman-like leadership -- and even more so stateswoman-like leadership. Angela Merkel and French President Nicolas Sarkozy are facing the defining challenge of their respective terms in office." 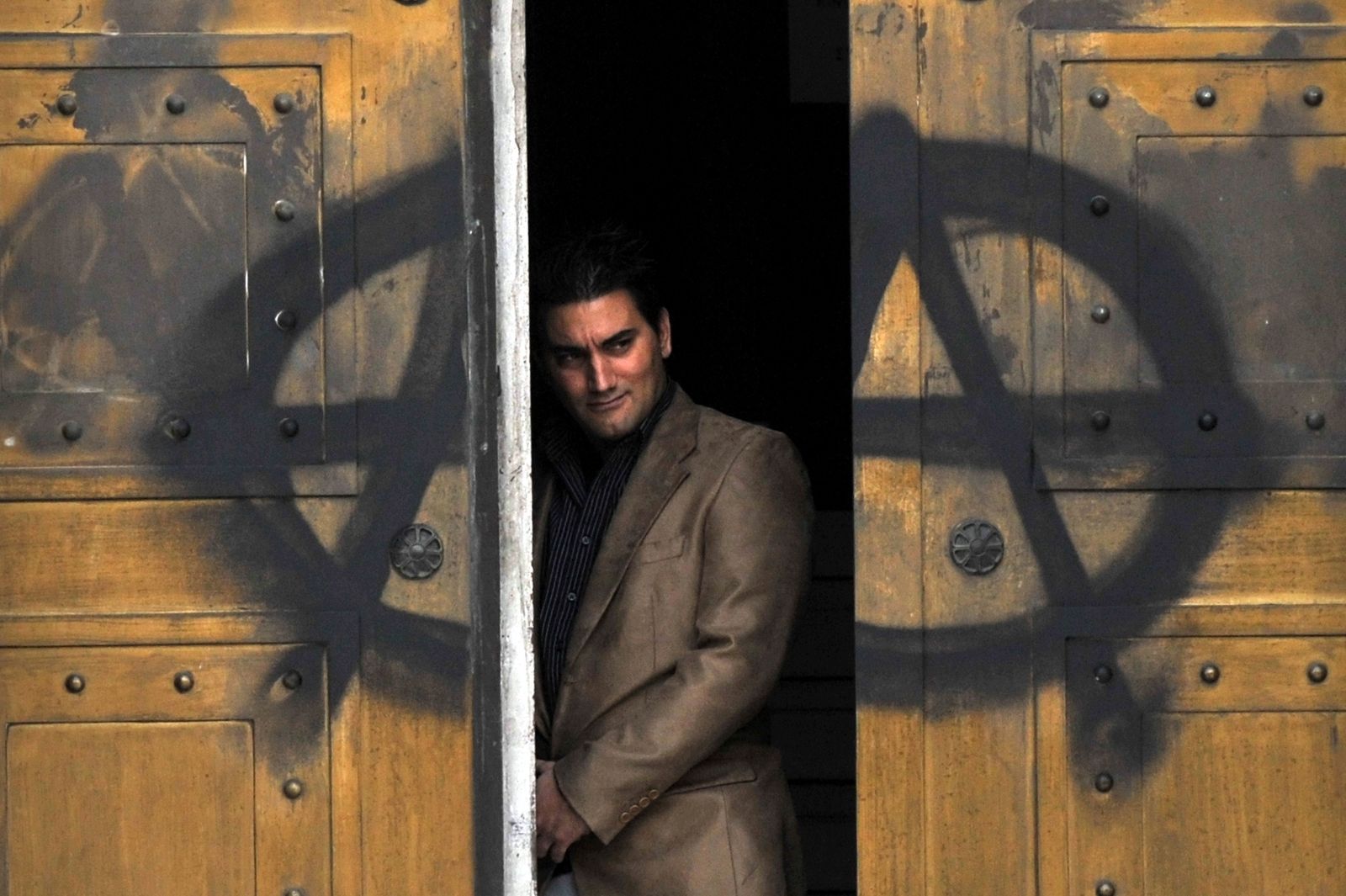 A man looks out the door of the Bank of Greece, marked with anarchy graffiti.