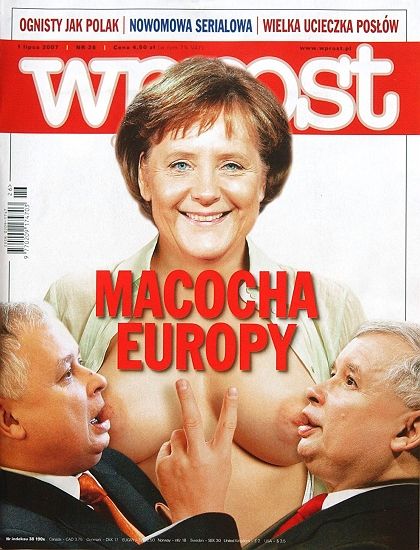 It's not exactly how one expects to see German Chancellor Angela Merkel: The broad, friendly smile seems completely at odds with her open blouse, two bare breasts spilling out. On each breast, one of Poland's governing Kaczynski twins is affixed -- Prime Minister Jaroslaw is suckling on the left, President Lech has attached himself to the right. One of them is holding up the "victory" sign right in Merkel's cleavage.

The image is on the cover of this week's Wprost, a conservative Polish newsmagazine that has not shied away from firing barbs at Germany in the past. The headline reads: "Europe's Step-Mother." As current holder of the EU's rotating presidency, Merkel, the magazine seems to be saying, is treating the rest of Europe like her step-children. And during last week's EU summit in Brussels, the article inside makes clear, she has been particularly condescending to the Poles. The magazine writes of Germany's "post-colonial reflexes" and says that six decades after the end of World War II, "the Germans still aren't able to treat Poles like partners."

"The cover's message," Stanislaw Janecki, editor-in-chief of Wprost, told SPIEGEL ONLINE, "is that Germany, especially Ms. Merkel, was trying to treat Poles and the Polish leaders as small children completely unable to act on their own and somehow dependent on Germany. There is the impression that Germany, being more powerful, wants to dominate Poland and that the Kaczynski brothers want to stand up to this domination."

German reactions to the cover photograph have been predictably shrill. News agency dpa called the image "drastic." Many papers, including the Cologne daily Kölner Stadt-Anzeiger, wrote of the Chancellor being "mocked" and "ridiculed." Tabloid Bild dove into its Rolodex and quotes a number of German politicians angrily denouncing the image's "tastelessness."

Yet despite the bawdiness of the cover, Janecki points out that it isn't just critical of Merkel. After all, the image makes it rather clear who the children are. "It is also critical of the Kaczynskis because the relationship between these politicians has become abnormal. It has become threatened by history and by national points of view. There are many factors, but the relationship is clearly not working."

Janecki also says that, among normal Poles and Germans, the relationship between the two countries is a positive one. Merkel, he claims, is generally well-liked in Poland and Germany is admired for helping the Poles become members of the European Union. Wprost -- which means "Straight On" in Polish -- even went out of its way to not make the cover still more offensive, Janecki says.

Merkel's Head with a 21-Year-Old Body

"We imagined it to be a little funny," Janecki says. "The stepmother is often more sexy and more friendly that the real mother is. The body is of a young, 21-year-old model. I would say it is quite a nice body, and we didn't want to say anything bad about Ms. Merkel." He says they got the image from a model agency the magazine works with and they were looking for somebody "who was not so thin but someone who also has a good body."

The Wprost cover is just the most recent salvo fired in an ongoing media war between the two countries. Janecki's weekly has attracted unwanted attention for its covers on more than one occasion, the most offensive being a 2003 cover showing then Chancellor Gerhard Schröder being ridden dominatrix style by Erika Steinbach -- head of a group representing Germans booted out of Poland following World War II -- clad in Nazi garb. More recently, Germany's Die Tageszeitung has printed images of the Kaczynskis with potatoes as heads. And DER SPIEGEL recently switched around the Wprost cover by depicting Merkel being ridden by the Polish leaders.

But reaction in the Polish press this week to the EU summit, which saw Merkel pushing through an 11th hour compromise deal after threatening to isolate Poland, has been far from universally critical of Germany. Daily Dziennik criticized Prime Minister Jaroslaw's pre-summit suggestion that Poland would have more influence in the EU had 6 million Poles not been killed in World War II. And the newspaper Gazeta Wyborcza said that the Kaczynskis had "crossed the line of European good taste."

On Tuesday, leaders from both sides of the border were doing their best to play down the fracas. The Chancellery in Berlin has refused to comment on the naked Merkel image, instead saying: "We have a great interest in doing our part to create a close and friendly relationship." Speaking of the EU summit, Prime Minister Jaroslaw Kaczynski said in an interview with Dziennik that "we weren't acting against the Germans. It wasn't our intention to weaken their position."

Still, the fact that the Wprost cover story was also co-written by Mariusz Muszynski, who is the Germany advisor to the Polish Foreign Ministry on Warsaw-Berlin relation, did little to defuse a tense situation.

With reporting by Marta Glowacka