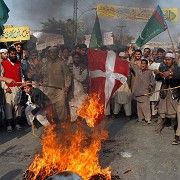 Many Muslims, as seen here in Pakistan in 2006, were not pleased about the Muhammad cartoons.

Danish police conducted a series of pre-dawn raids Tuesday morning and arrested several individuals suspected of planning to murder one of the 12 cartoonists whose unflattering depictions of the Prophet Muhammad led to worldwide protests in 2006.

Those arrested include several "people with a Muslim background" with both Danish and foreign citizenship, according to the Danish newspaper Jyllands-Posten, which originally published the caricatures in the autumn of 2005. The paper reports that cartoonist Kurt Westergaard was the target of the plot and that Danish authorities have been investigating the threat for some time.

Westergaard's cartoon depicted the Prophet Muhammad with a bomb in his turban, complete with a lit fuse. It was one of the most offensive of the drawings that ultimately resulted in violence and protests in a number of predominantly Muslim countries, much of it targeting Danish embassies and products. At least 50 people died in the rioting.

The raids and arrests were conducted in Aarhus, located in western Denmark. The Associated Press quotes PET, the police intelligence agency, as saying that the raids were meant "to prevent a terror-related murder" and to do so "at an early phase to stop the planning and the carrying out of murder." According to Danish broadcaster DR, police took five people into custody.

The police did not mention either the number of arrests made or the suspected targets. Carsten Juste, editor-in-chief of Jyllands-Posten, however, released a statement saying that the murder plans against Kurt Westergaard were very "concrete." The cartoonist and his wife have been living under police protection for the last three months as a result of the plot.

"Of course I fear for my life after the Danish Security and Intelligence Service informed me of the concrete plans of certain people to kill me," Westergaard said in a statement printed in Jyllands-Posten. "However, I have turned my fear into anger and indignation."

The murder plot is just one of a number of aftershocks reverberating from the cartoon crisis. In November 2006, Jihad Hamad -- one of two men behind a failed plot to explode suitcases packed with bombs on a German train -- said in a television interview that the cartoons had prompted him to act. His partner in the plot, Youssef Mohammed el-Hajdib, reiterated that claim in a German court last week.