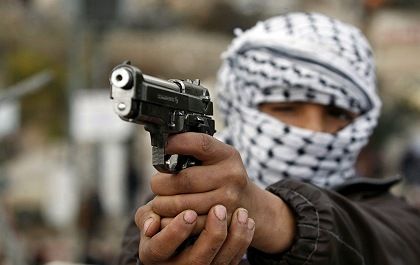 A member of the al-Aqsa Martyr's Brigade at a January protest in the West Bank.

Just three days ago, Danish Prime Minster Anders Fogh Rasmussen said in an interview that he thinks people have forgotten about the Muhammad cartoon crisis over a year and a half ago. But with elections in Denmark looming next Tuesday, a right-wing party decided to use an ad campaign to remind voters. By doing so, it touched off a bizarre international tiff pitting nationalist extremists against Islamist extremists.

Reacting to the Danish People's Party's use of a Muhammad image in a newspaper ad, Khaled al-Jabbari, a spokesman for the militant Palestinian group al-Aqsa Martyrs' Brigade, threatened in an interview that the party was "playing with the blood of the Danish people." Speaking to Jyllands-Posten, the Danish newspaper that published 12 Muhammad caricatures in early 2006 triggering riots in the Muslim world, al-Jabbari said: "That isn't a threat, it's just a warning. I have a message for the Danish people: (Such images) are the same as stabbing us in the heart."

Al-Jabbari warned that the al-Aqsa Brigade, considered a terrorist group by the European Union and the United States, may add the party to the "list of enemies."

The newspaper advertisement used what the xenophobic party claims to be a "400-year-old drawing" of the Prophet Muhammad to emphasize the party's "commitment to free speech," party spokesman Kim Eskildsen told SPIEGEL ONLINE.

"We were just trying to say that we are not bound by Islamic law," Eskildsen said. "You have to understand that if there is a prohibition against drawing Muhammad's likeness, then it is only valid for Muslims. If we obey these random rules imposed by an ancient religion -- that is not good."

'Every Party Is Populist'

Chaired by Pia Kjærsgaard, the Danish People's Party (DF) is a nationalist party that is highly critical of immigration and multi-culturalism. It took 13.3 percent of the vote in the 2005 elections, making it the country's third largest party. The party is polling slightly below that ahead of next week's vote -- with Anders Fogh Rasmussen's coalition leading with 35 percent support ahead of the Social Democrats with 25 percent.

So was the ad a last ditch effort to gain support? "Every party is populist during a campaign," Eskildsen said. "We aren't racist. We just talk about issues that are taboo like integration and restricting immigration."

The reaction to the threat from al-Aqsa Martyr's Brigade -- which is aligned with Palestinian President Mahmoud Abbas' Fatah Movement -- came quickly. Prime Minister Rasmussen told Jyllands-Posten: "It is, of course, unacceptable that a terror organization tries to intimidate a freely elected representative of the people." Party leader Kjærsgaard said, "under no circumstances will we give in to the terror organization."

Aside from the single threat from the Palestinian militants, there has been little reaction to the ad and the party said it was not taking additional security precautions.

Still, the potential for escalation remains. The violent reactions in early 2006 came weeks after the 12 caricatures -- including one showing Muhammad wearing a time bomb instead of a turban -- were originally published. Numerous Scandinavian embassies were attacked across the world and Danish products were boycotted in numerous Muslim countries.