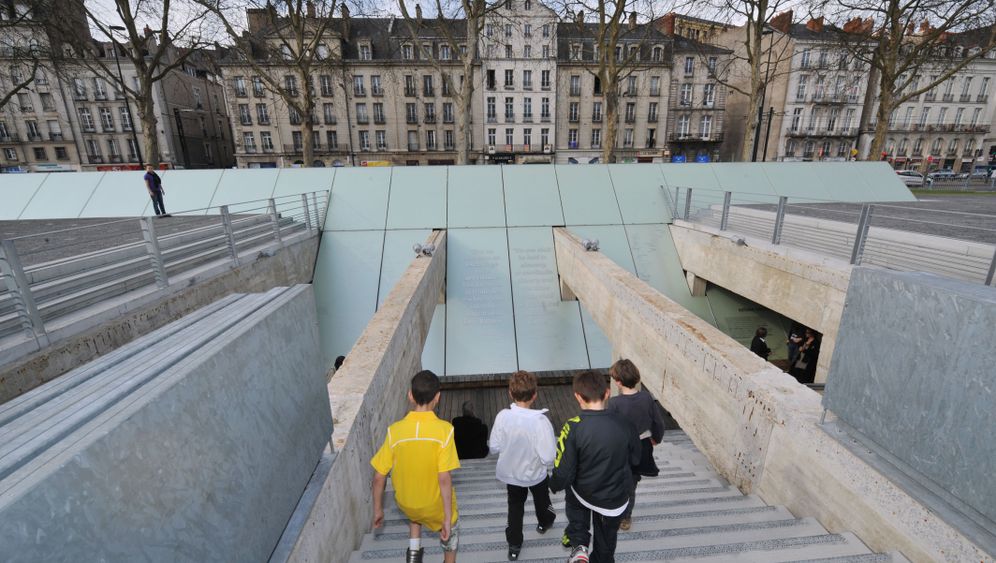 In the 18th century, cruelty had poetic names, like Le Prudent ("The Prudent"), La Légère ("The Light") or Les Trois Maries ("The Three Marys"). The ships, named in the hope of a good voyage or baptized with Christian first names, were part of a brutal business between Europe, Africa and America: the slave trade. During a period of approximately 400 years, at least 13 million people were transported under horrendous conditions from Africa to the colonies of the New World.

The northwestern French city of Nantes played a central role in what has been described as the largest forced migration in global history. Although the city's merchants came late to the lucrative slave trade, long after the Portuguese, Spanish and British, over the course of the 18th century the city on the Loire River became a central hub of the Atlantic triangular slave trade -- and with it the most important port city in France.

Over 40 percent of the French slave trade was carried out via the city, with around 450,000 men, women and children abducted from Africa to America. According to curator Marie-Hélène Jouzeau, who is responsible for the city's historical heritage, it wasn't just the major merchant families who specialized in the business. "The entire mercantile community was involved, and the whole region profited from it," she told SPIEGEL ONLINE.

Late last month, and with little fanfare in the international press, Nantes officials opened the Memorial to the Abolition of Slavery, which the organizers claim is unique in Europe. The site of the memorial, the Quai de la Fosse, is a history-steeped wharf where the slave ships moored before they departed for Africa. The installation comprises a sloping wall of opaque glass that cuts through the wharf's promenade, while a total of 1,710 panels laid into the sidewalk feature the names of slave ships.

On a lower level, a dimly lit passageway where the water from the river washes over the ground, a wooden boardwalk leads along the sloping transparent wall. It features the word "freedom" in 40 languages as well as poems, documents and other fragments which testify to the struggle against slavery and oppression which lasted over 200 years. A "memory trail" leads from the monument to the city's history museum, where the slave trade is described with moving documents.

Reflecting on a Dark Chapter

"A kind of memory work," is how Nantes Mayor Jean-Marc Ayrault describes the monument, with which Nantes is openly confronting its past. "It's an invitation to reflect on a dark chapter in the history of our city," he says.

Nantes had long suppressed the brutal origins of its wealth. A collective silence covered up the fact that the prosperity of the city's great families, like the Michels, Montaudouins and Sarrebourse d'Audevilles, not to mention the splendor of the city's architecture, were built on the slave trade.

The city, which is known today for the Castle of the Dukes of Brittany, its art festival and its annual Mardi Gras-style carnival, has always boasted of its history as a great industrial city and colonial port. After World War II, it continued as a center for industry and shipping, but has transformed itself into a service industry center in recent decades. In the process, the city's view was always directed at the future, with the aim of expansion and modernization.

Two hundred years ago, however, sailors loaded printed fabrics, jewelry and liquor onto ships in Nantes' port. Those goods were later exchanged on Africa's coast for sugar, cocoa, coffee, cotton, indigo -- and people. This trade necessitated a comprehensive infrastructure in Nantes. Shipbuilders, shipowners and suppliers were all involved, and the lucrative voyages were generally financed on credit by consortias of several merchants.

The ships weren't bartering in cheap trinkets. Original loading lists of a three-masted ship from Nantes document that up to 80 percent of the cargo consisted of textiles, with the rest made up of pistols, swords, pearls and mirrors. It took the heavily laden ships a good two months to reach their destinations in Africa, where at the time there were around 400 trading outposts between the port of Bissau and Mozambique. Here, white traders negotiated with representatives of African kings regarding the purchase of slaves -- a process that could sometimes last up to six months.

Following that, the ships were refitted so they were ready to carry their human cargo. An 18th century plan in the Nantes History Museum shows the example of La Marie Séraphique. Supplies were stashed in barrels in the bilge just above the keel, as well as on the upper deck. In the decks in between, the slaves would be held under terribly confined conditions. Men and women were held in separate pens, bound in pairs in leg irons and manacles. Depending on the type of ship, about 300 slaves could be transported in this way. Around two-thirds were men and one-third women.

From Nantes, the ships would continue to the Caribbean -- usually to the Antilles or to Santo Domingo in what is now the Dominican Republic. There, the local plantation owners and colonialists would be waiting for the arrival of labor from Africa. Historical records show that "negroes and negro children" changed hands. Shipowners, as well as captains, wanted the slaves to survive the journey, which spanned several weeks. Nevertheless, between 13 and 19 percent of the captured perished at sea through sickness, suicide or in quashed rebellions.

Scruples? Remorse? Moral reservations? They certainly weren't to be found on the part of the ship owners and citizens of Nantes who profited from the trade. An act known as "Le Code Noir" (the Black Code) had legalized the slave business back in 1685. Not only was it accepted, but it was also explicitly encouraged by the royal family and described by the church as an "ordinary occupation." Noveau riche families shamelessly outfitted themselves with palatial estates in the city, exotic furniture and even employed freed slaves as servants.

Even during the time of the French Revolution in 1789, the traders' lobby bitterly fought efforts to eliminate the the slave trade, even though the majority of the city's residents supported the new Republican values of liberté, egalité and fraternité. Even after the ban on the slave trade in France in 1817, some traders in Nantes continued with what had by then become an illegal practice.

According to curator Jouseau, for a long time there remained a "loss of memory," supported by a distorted look back at the period of the slave trade. It wasn't until the end of the 1980s that historians, organizations and local politicians began to experience a shift in thinking. The idea to firmly establish the history of slavery into the town's landscape came next. "It wasn't an easy path," Ayrault, the town mayor recalls. "But after initial resistance from reactionaries in the town, the majority of people and politicians ended up backing the plan."

The monument, created by Polish artist Krzysztof Wodiczko and American architect Julian Bonder is intended as more than a memento of a past tragedy. At Quai de la Fosse, the founding act of the 1948 United Nations Declaration for Human Rights, "No one shall be held in slavery or servitude; slavery and the slave trade shall be prohibited in all their forms," is accompanied by a shocking fact: An estimated 27 million people around the world continue to be enslaved today.