Voters in the Czech Republic elected leftist ex-Prime Minister Milos Zeman as their next president over the weekend in the country's first ever direct presidential election, after a bitter campaign marked by populism and battles over the country's history.

Zeman, 68 years old and a member of the Communist Party prior to the 1968 Soviet invasion of Czechoslovakia, is more sympathetic to the Czech Republic's European Union membership than his predecessor, Vaclav Klaus, who stays in office until March 7. He was elected in a run-off election against current Foreign Minister Karel Schwarzenberg with 54.8 percent of the vote, winning big among poorer and rural voters.

Klaus' vociferous euro-skepticism pushed the country of 10.5 million people to the bloc's fringe. Though the office of the president has little influence in day-to-day politics, it does have the power to appoint prime ministers, central bank leaders and judges, and a more EU-friendly president could serve to heal some of the country's rifts with the bloc.

Zeman said he wanted to unify the country as "the voice of all citizens" and the "president of the bottom 10 million." His campaign often called into question the national allegiances of his opponent, current Foreign Minister Karel Schwarzenberg, who belongs to an old aristocratic family and lived in exile in Austria during the communist rule of 1948-1989.

The German press paid particular attention as the issue of the Sudeten Germans arose in the campaign. After World War II, Czechoslovakia expelled three million ethnic Germans from its borders, something Schwarzenberg equated to a war crime. Some of those Germans are seeking to reclaim properties that were confiscated as part of the expulsions, and Zeman accused his opponent of backing their efforts. There is some concern that Zeman's penchant for populism could reignite old wounds.

Schwarzenberg said Zeman won the election by lying. "The difference of 10 percentage points was the result of this kind of campaign," he said. "It is impossible to defend against certain types of bad-mouthing."

"In the two-man battle with his conservative opponent Karel Schwarzenberg, Zeman behaved like a cold, calculating power politician to whom truth and integrity did not always matter. Together with President Klaus, who stays in power until March 7, he sparked off a nationalist campaign that seemed like it belonged in the past. The pair unscrupulously made the sensitive subject of the expulsion of the three million Sudeten Germans after World War II into a cause for agitation in the tabloid press, stoking unjustified fear that inhabitants of the former Sudetenland could lose their homes and gardens. The campaign resonated among voters, according to early analyses. And the clarity of the electoral results speaks for Zeman's campaign as well."

"Klaus and Zeman have also ridiculed those in the Czech Republic who courageously and tactfully endeavor to discuss in an appropriate manner the historical ties to their once German-speaking countrymen. And that trend will be unstoppable for a long time -- indeed, it is a regrettable setback. Arm in arm, both showed themselves to be the churls they were known to be. From their camp -- in fact, directly from the Klaus family -- came personal, spiteful remarks against Schwarzenberg unworthy of a departing president."

"It is utterly misguided to apply the traditional political left-right schema to the two rivals, Zeman and Schwarzenberg. This election in the Czech Republic was not a fight between the two camps. Sure, Schwarzenberg is a quirky, old-fashioned aristocrat -- but he's no real classic conservative. Sure, the majority of Czech society currently thinks more towards the left, mostly because its less-than-convincing center-right government has demanded painful societal changes and tough austerity measures. But Zeman is anything but a leftist. He is the same noisy, erratic populist that he was in the 1990s.

"The fact is that a majority of Czech voters didn't want to remember that. Zeman won the election because he portrayed himself as a non-politician. As one who did not belong to the political class, which the citizens have had enough of -- no matter left or right."

"The first direct election of a Czech president has redrawn the political map of Bohemia and Moravia, making old distinctions visible. Milos Zeman won in all regions except the capital, Prague, but Schwarzenberg won majorities in most regional capitals. The Prague Castle was captured by the countryside. The milieu of the lower classes, the "bottom 10 million" as the next president said on the evening of his election, the villagers and farmers, the workers and unemployed, the lower employees and pensioners -- they asserted themselves against the new urban middle class. The losers in the changes to the social system beat out the winners. Zeman was correct in his announcement that the voters would render a decision between left and right." 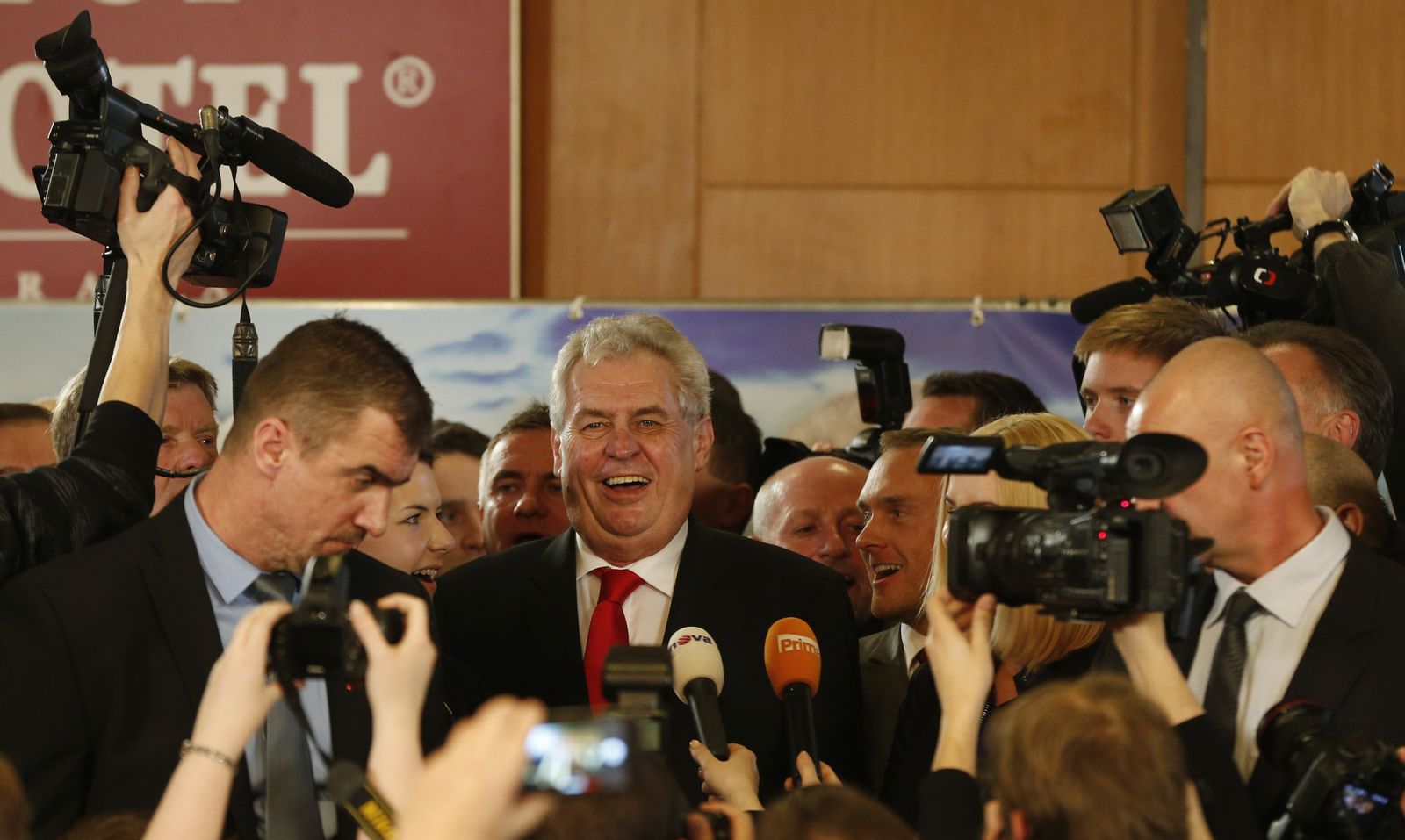 Milos Zeman smiles while addressing the media after the announcement of his victory.