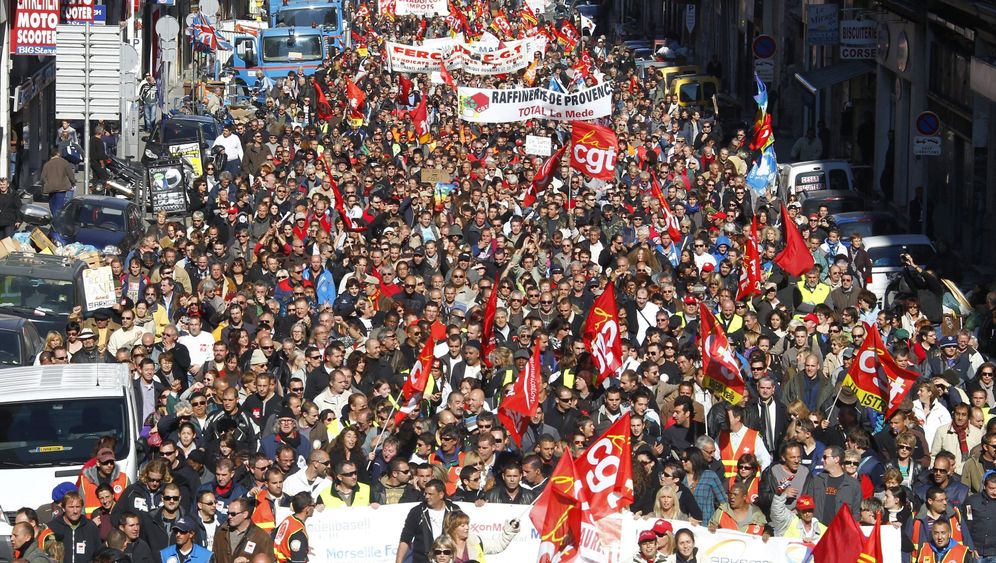 Photo Gallery: French on the Barricades Against Pension Reform

France entered its sixth day of nationwide strikes and protests in two months on Tuesday as trade unions sought to force President Nicolas Sarkozy to abandon a deeply unpopular pension reform raising the minimum retirement age to 62 from 60.

A total of 260 protests were planned across the country on Tuesday, news channel France 24 said. Striking oil refinery workers have shut off fuel supplies and some 2,500 of the nation's 12,500 petrol stations have run out of fuel. There are long queues of vehicles in front of stations that are still open.

The social and industrial unrest has crippled the country. Scores of flights were cancelled on Tuesday and railway operator SNCF expects to run only half its scheduled TGV high-speed services. Local public transport was brought to a standstill in many cities apart from Paris, where Metro and bus services were reported to be normal.

The Education Ministry said lessons had been halted by protesting students in 379 schools. In the Paris suburb of Nanterre, high school students threw stones at police and set fire to a car on Tuesday. Police responded with tear gas and cordoned off the area. Justice Minister Michele Alliot-Marie said the police would take tough action against rioters.

Sarkozy says the reform is the only way to save France's pension system. A decisive vote on it will take place in the Senate on Wednesday. Sarkozy reiterated on Tuesday that he won't back down. "The reform is essential and France is committed to it and will go ahead with it, just as our German partners did," he told journalists during a summit meeting with German Chancellor Angela Merkel and Russian President Dmitry Medvedev in the northern city of Deauville.

Merkel backed Sarkozy in an interview with French channel France 2. "I think the population in Germany, just like in France, won't be able to avoid facing up to the truth," she said. "The truth is that people are living longer. And if we want to guarantee a decent pension, the fact that we're living longer must lead to people working longer."

Merkel pointed out that Germany was increasing its retirement age from 65 to 67. "It would be very bad for the young generation if we were now just to close our eyes to reality and let our children and grandchildren face all the problems one day."

12 Bilder Photo Gallery: French on the Barricades Against Pension Reform