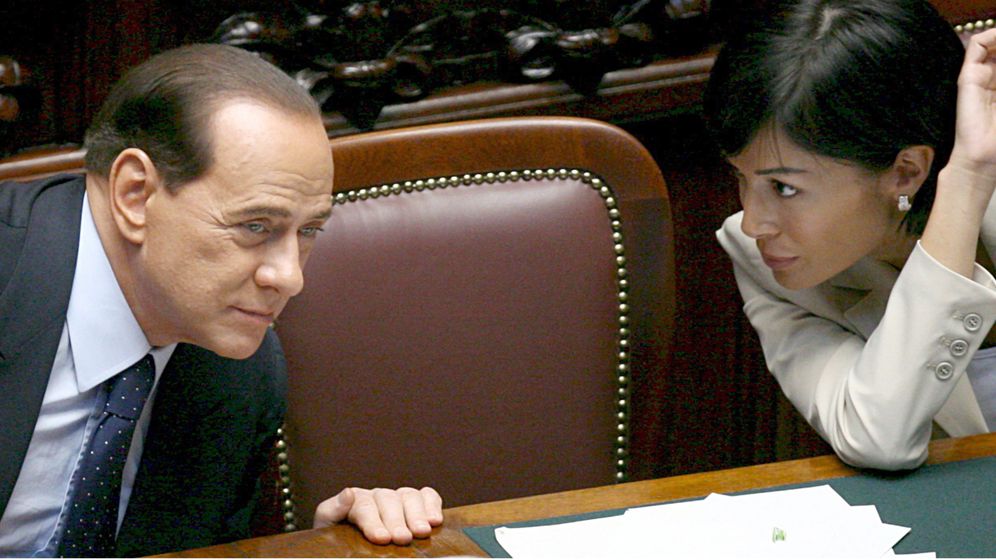 Italian Minister of Equal Opportunity Mara Carfagna, popularly known as "Bella Mara," has had a fairy-tale, Cinderella-like career -- and one that would only be possible in Italy. Indeed, it's only been a few years since the native of southern Italy was posing -- her oiled body draped in fishing nets -- for the kinds of pinup posters that construction workers hang in their lockers and spending her evenings appearing on primetime TV shows, her skirt hiked almost up to the crotch.

Carfagna was what the Italians call a velina, the name given to the scantily clad women who regularly appear -- beautiful but silent -- on Italian TV shows. Indeed, she was a product of Italian television, where she appeared until 2006, and you can still find photos and videos of her from those days online.

But now, the 34-year-old politician -- crowned "the world's beautiful minister" by the tabloids -- is a creation of Italian Prime Minister Silvio Berlusconi. In 2007, after seeing her on one of the TV stations belonging to his media empire, he jokingly -- and on TV -- stated he wouldn't mind marrying her, precipitating a war of roses with Veronica Lario, his wife at the time.

A little more than a year later, Carfagna was appointed to serve as Berlusconi's federal minister for equal opportunity. Many Italian women perceive her meteoric rise to political prominence as both an affront and evidence of the distorted image of women in Italy -- as if having a perfect figure and being beautiful and obedient were all it takes.

But everything changed after Carfagna's appointment in 2008. She seems transformed today, looking slightly nun-like with her short black hair and modest outfits. Horrified by the way women sell their bodies, her first act in office was to try to make street prostitution a crime with fines for both clients and the prostitutes themselves -- and she was showered with ridicule for it. She was seen as the product of her maker, as the prime example of how women are viewed in Italy.

But then she grew into her position. She launched initiatives to protect female rape victims and homosexuals. Widely praised for her efforts, she ignored Berlusconi's chauvinist comments, such as: "We don't have enough soldiers to protect our women from violence. They are simply too beautiful."

But now this so-called product of Berlusconi is liberating herself. On Nov. 20, at the height of the recent government crisis, Carfagna announced her intention to step down on Dec. 15. As reasons, she cited her view that Berlusconi was no longer in control of the government and that she had too little power. Moreover, unlike her fellow cabinet ministers, Carfagna is no longer holding back, openly discussing the dramatically growing mountains of garbage in her native Campania region, where she is rumored to be interested in becoming mayor of Naples.

Berlusconi reacted huffily. Carfagna was the fifth member of the government to threaten to leave the coalition. "I created her," he complained soon after the announcement, "and this is how she repays me."

Three days later, Berlusconi was happy to report that she had changed her mind. "I spoke to her for two hours yesterday," he said, according to the Italian news agency ANSA. "She understood and said she's not quitting."

A New Type of Enslavement

Though the Italian media has been depicting Carfagna's rebellion as something sensational, it has been the status quo in Italy for a long time. Indeed, women have been rebelling there for years, battling the roles their country has reserved for them: You can be either a whore or a saint, but nothing in between. And, in this confrontation, they face powerful enemies: machismo, age-old stereotypes and the influence of the Catholic Church.

Of course, Italian women are proud to finally be able to show their bodies in public; it was part of their liberation. But they also know that this freedom has also been repurposed to allow their bodies to be displayed for cheap sexual reasons, especially on television.

Now they fear being pushed back into the Middle Ages, as if Italy's many bright, accomplished women had changed nothing in this country, women such as educator Maria Montessori, author Oriana Fallaci, actress Anna Magnani and publisher Inge Feltrinelli. And their fears seem justified.

The latest figures issued by the World Economic Forum are alarming. In the organization's 2010 Global Gender Gap Report, Italy ranks 74th among 134 countries, below Colombia and Venezuela.

In no other European country do so few women work outside the home (only 44 percent), and those that do earn half as much as their male counterparts. They spend 21 hours a week doing domestic chores, longer than any other European woman. Only five percent of Italian men have ever operated a washing machine. Young female academics, not seeing a future for themselves in Italy, are abandoning the country and embarking on careers in the United States or trying to undo their country's reputation as part of Berlin's growing Italian Diaspora.

And in Italy itself? Are women there merely victims and not participants? Of course Italian women fight back -- and not just since the scandals surrounding Berlusconi's affairs. But the world rarely learns about it, and even pundits fall back into using clichés. Indeed, it's really tempting to reach for clichés when the country's prime minister is the personification of stereotypical Italian machismo, a man who likes to recruit for his harem among schoolgirls and prostitutes, and who is said to have really ever loved only a single woman: his Mamma Rosella, now deceased.

Since one of Europe's most influential women's movements emerged in Italy in the late 1960s, Italian women have also known that silence is not a solution. Today, once again, hundreds of thousands of women are signing petitions to support the "dignity of Italian women" and debating on TV talk shows. But, most of all, women are working at the grassroots level, fighting for jobs and the rights of domestic servants working illegally and prostitutes.

Fighting Back with Images

One of these women is Lorella Zanardo. A former advertising executive at Unilever, the 52-year-old studied dance and acting and knows her way around the world of television. After living in Munich and Paris, Zanardo returned to Italy and was shocked when she saw the roles being played by women in public: women in clothing ads for Benetton almost pornographically sticking cucumbers into their mouths, or on television, where they are velinas, giggling hostesses or letterines, that is, girls who carry letters, lottery tickets or football results through the studio.

Zanardo quickly learned that even turning off the TV didn't do any good. So, for three months, she recorded everything that Canale 5, Rete 4 and the state-owned RAI channels had to offer in terms of entertainment programming. She edited the material together to make a documentary film with a spirited narration. Three million Italians have already seen the film, "Il Corpo delle donne" ("Women's Bodies"), which is now available online in several languages. It is practically a horror film, an attack on the Berlusconi system using his own weapons: images. Foreigners who have seen the film, Zanardo says, always ask the same question: "Why do you put up with this. Why don't you fight back?"

The Women of Italian TV

On an afternoon in early November, Zanardo is sitting with teachers and students at a school in Milan, showing her film. There is an awkward silence in the room. In the film, women in garter belts loll about on a table surrounded by middle-aged men, in a segment from a news roundup show called "Striscia la notizia" ("The News Slithers"), which has been airing in a prime-time slot for the last 23 years. Both the women and the men are silly and in good spirits. But only the men are wearing clothes and speaking.

When women have something to say on Italian television -- for example, as newscasters, in talk shows or in reports on the Mafia and the garbage in Naples -- they usually speak through grotesquely pumped up lips below noses perfectly angled by plastic surgery. They all look alike, and they all obey the same command: to appeal to the supposed tastes of men. Appearance is what counts, and the body has to be perfect, at least if Berlusconi -- with his own facelifts and hair transplants -- has any say in the matter.

The most horrifying segment of Zanardo's film shows a starlet hanging from a meat hook with a butcher stamping an expiration date onto her bare buttocks. The scene, which appeared on the show "Scherzi a parte" ("All Joking Aside"), has become branded into the collective Italian memory.

After this scene, as the teachers in the Milan school wipe tears from their eyes, the students fidget in their chairs in shameful silence. It's not like these images are anything new to them. It's just that they've never learned how to interpret them. Berlusconi's harem culture and sexism on television have shaped an entire generation, says Zanardo. Today, everyone wants to be like Ruby and Noemi, and "velina" is one of the top choices that Italian girls cite as a potential future career.

Still, Berlusconi's name isn't mentioned once in Zanardo's film, and it rarely comes up at the protest marches staged by the women's movement. Saying his name isn't necessary, the women quip, because everyone knows whom they are all talking about.

We'll soon be rid of Berlusconi, Zanardo predicts, suggesting that his time has come. But will there be a coup? It's well known in Italy that women get 80 percent of their information from television, and politicians -- fearing for their jobs -- are hiding behind the prime minister.

For her part, Equal Opportunity Minister Carfagna opposes a women's quota - for now. In Italy, she is celebrated as someone who is trying her hand at resistance and who inspires hope -- the hope that other women will follow her lead. And perhaps the hope that "escort" will no longer be a word associated with Italian politicians, but just with an old Ford.