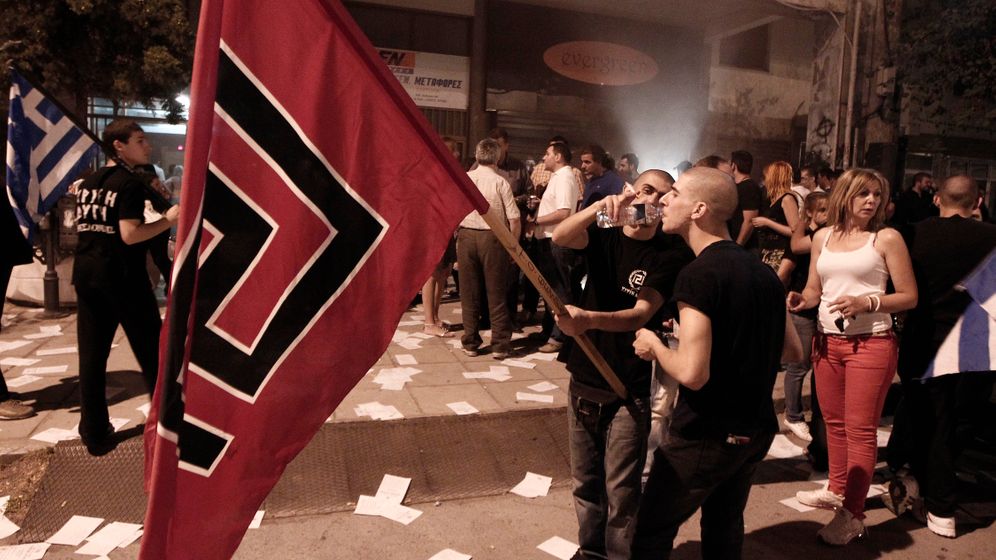 The Municipal Theater in Piraeus, Greece, was bathed in an eerie light, with yellow floodlights and red torches combining to illuminate the theater's neoclassical façade, which now served as the backdrop for a macabre spectacle: At least 1,000 neo-Nazis and their supporters had turned out for a march, and red flags bearing a large, black swastika-like symbol flew from the building's front steps.

The right-wing extremist party Chrysi Avgi, or Golden Dawn, convened this demonstration on a Thursday in February to protest an arson attack on its local party office -- and to make another display of its strength.

Ringed by a group of brawny toughs, party leader Nikos Michaloliakos, 55, bellowed: "No one can stop us -- not the bombs, not all your filth. We will triumph!" His listeners, many of them hidden beneath black hoods, replied with a thunderous "Zito! Zito!" The phrase literally means something like "Long live!" but the affect is more like "Heil!" -- and deliberately so. Many also raised their right arms, while the police remained in the background. The right-wing extremists then took their burning torches and marched through the downtown of this port city. Foreigners and any young people dressed in alternative-looking clothing made sure to clear out of the streets before they arrived. The scent of danger hung in the air.

Right-wing thugs have been spreading fear and terror in Greece for months. The worse the financial crisis gets and the harsher the budget cuts imposed by European creditors are, the worse the terror gets on the streets. Foreigners have been attacked, homosexuals chased and leftists assaulted. Some were beaten to death. There are parts of Athens in which refugees and minorities no longer dare to go out alone at night, and streets that are echoingly empty. Foreign merchants have had to close their doors, while journalists and politicians who criticize these developments receive threats or beatings.

Ta Nea, a leading Greek daily, has described conditions here as similar to those of Weimar Germany. Vassiliki Georgiadou, a political science professor in Athens, likewise calls it "an atmosphere like in the 1930s in Germany against the Jews and their businesses."

As recently as Greece's October 2009 parliamentary election, Golden Dawn garnered just 0.29 percent of votes. But in the early election held last May, as well as in the subsequent new election in June, the right-wing extremist party suddenly received almost 7 percent of votes, securing 18 seats in the country's parliament.

Polls now show the party holding 10 to 12 percent of voter support. Together with two other right-wing nationalist groups, that puts the extremist block at about 20 percent. Nowhere else in Europe are neo-Nazis and right-wing extremists profiting as greatly from the financial crisis as in Athens.

And now these extremists are practicing what they once only preached.

Violent on the Streets

In 2005, the French monthly newspaper Le Monde Diplomatique wrote that party leader Michaloliakos had warned, "When we are strong, we will show no mercy. It won't be democratic anymore."

At the time, Michaloliakos' statements were derided, but now the party and its followers are proving on the streets of Athens just how serious they are with their threats. In some downtown city neighborhoods where many asylum seekers and refugees live, small bands of extremists calling themselves "stormtroopers" -- in allusion to the Nazi Sturmabteilung (SA) paramilitary organization better known as the "brownshirts" -- have taken to roaming the streets on foot or on motorcycles, attacking foreigners and leftists and beating them to the point that they require hospitalization. They use clubs, baseball bats, knives and in some cases even guns.

Human rights organizations have recorded hundreds of such attacks, with the list growing daily. These attacks are "systematic and organized" in their execution and unquestionably "racially motivated," was the conclusion reached late last summer by 19 aid organizations working in tandem with the United Nations High Commissioner for Refugees. Since then, the situation has only gotten worse.

Many victims of this violence no longer even go to the police, who are rumored to sympathize with the extremists. At polling places specifically designated for police, Golden Dawn received as much as 23.7 percent of the vote.

Attack victims relate stories of officers who were more interested in checking their residency permits than in tracking down the perpetrators -- or simply sent them away. Eyewitnesses also report incidences of open collaboration. One example occurred in October in front of the Hytirio Theater in Athens, after three members of parliament representing Golden Dawn led a gang of thugs in disrupting a play being performed there. When Christos Pappas, one of the parliamentarians, stepped in to release one of the arrested men from a police bus, officers stood by without intervening.

"The police are no longer an independent organization," says Dimitris Kyriazidis, a member of parliament for New Democracy (ND), the country's conservative ruling party. Kyriazidis was himself a police officer and co-founder of a police officers' union. He criticizes the government's failure to initiate criminal proceedings for these cases as a "breach of democracy."

Officially, Golden Dawn denies any participation in or responsibility for these incidents. But, in most cases, its members can be found in the thick of things. In the port town of Rafina, for example, Golden Dawn parliamentarians headed groups that swept local markets, beating up foreign merchants and destroying their stands.

Neo-Nazi parliamentarian Georgis Germenis described it afterward as "taking a stroll," adding, "Then we did what Golden Dawn must do." Fellow party member Kostas Barbarousis boasted, "We restored order."

Then there's party spokesman Ilias Kasidiaris, Golden Dawn's leading ideologue, who slapped a Communist member of parliament in front of the cameras on a television talk show and threw a glass of water in a left-wing politician's face.

Last summer, when Greek police confronted a black-garbed Golden Dawn motorcycle gang that had just beaten several foreigners so badly they ended up in the hospital, the daughter of party leader Michaloliakos was among those arrested. And following the recent stabbing death of a Pakistani man in Athens, the police's search of a suspect's house turned up massive amounts of Golden Dawn propaganda. Kyriazidis, the former police union chief and ND parliamentarian, has called Golden Dawn a "gang of murderers."

The extremists are both brutal and ruthless. They have recently started attacking hospitals to drive out "illegal" nurses and foreign patients. Young members of the group are also starting to band together at schools and terrorize teachers.

Of the party's 18 members of parliament, 17 are currently the subject of proceedings to revoke their parliamentary immunity. The petitions have already been granted in at least five of these cases. Evangelos Venizelos, leader of the country's socialist PASOK party and a former deputy prime minister, would prefer to ban the neo-Nazi party entirely.

But Golden Dawn's leaders aren't particularly worried. They feel emboldened by their strong showing in polls and validated by the effect their intimidation tactics have had. At the sole press conference the party has given so far, on the evening of the parliamentary election, journalists and camera operators were ordered, "Stand up! Show your respect! Anyone who doesn't stand leaves!" And the media representatives complied.

This made it all the more astonishing when party leader Michaloliakos appeared on February 1 and posed for photographs in parliament with two supposed journalists -- Germans, no less. In reality, the men turned out to be known neo-Nazis who had come to Greece as leaders of a delegation of around 30 German right-wing extremists.

These ties to Germany make perfect sense since Golden Dawn's ideologues see themselves as following in the tradition of historical role models. In the few interviews he has given, Michaloliakos hasn't held back the unvarnished truth about his views.

On Adolf Hitler, he says: "A historic figure, who is not judged objectively."

On the Holocaust: "An exaggeration."

And yet Greek investigators are having trouble pinning anything on the extremists. Nikos Ornerakis has been investigating his country's spate of right-wing terror since December 1, but he is the only public prosecutor working on the issue and hasn't even been assigned a secretary to help him. Left-wing extremists, on the other hand, have been under observation by various special commissions for years.

"It's a big problem," Ornerakis says. He's investigated about 30 cases so far, but none of them came from the police. Instead, they were "all drawn from the newspapers." The Greek government does plan to establish 68 police stations across the country dedicated to fighting racism and hate crimes -- eventually.

"So far, though," the investigator explains, "there isn't even a legal precedent for investigating and prosecuting racist crimes," because they aren't classified as an offense under Greek criminal law. "That's something that urgently needs to be changed," Ornerakis says.

That and so many things in this country, which lays claim to having invented democracy.