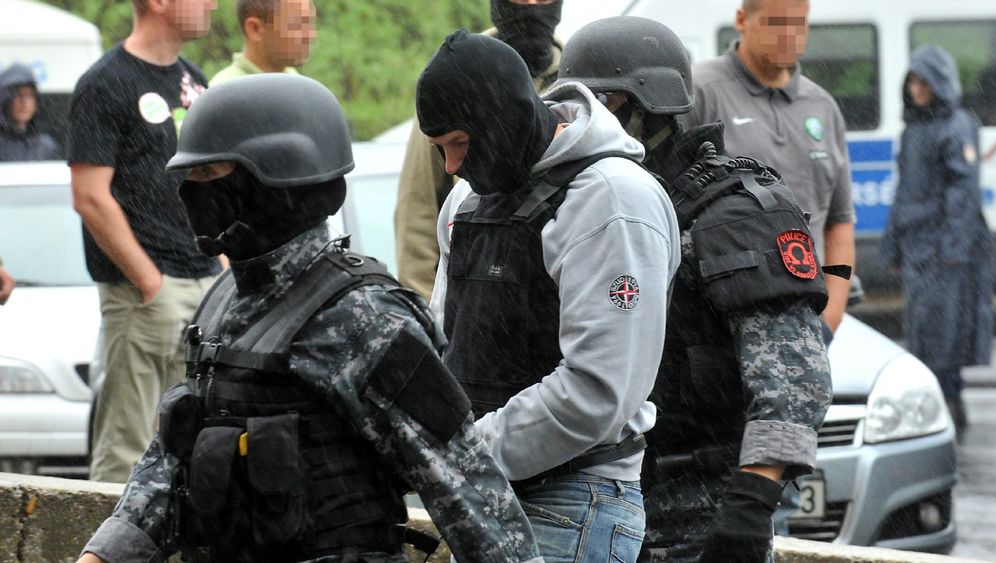 Sometimes, when Tibor Nagy and his children have a little extra money, they drive to the grave, straighten its wooden cross, lay a few flowers and stand there in silence. The grave is nothing more than a pile of sand, the crucifix is gradually weathering.

Nagy and his children would prefer to have a proper gravestone for Éva Nagy, his wife and their mother, something more fitting. But they can't affort it. A neighbor once offered to sell them the gravestone of her exhumed husband. "But it didn't work out," says Krisztina Nagy, the eldest daughter.

On the night of Nov. 3, 2008, Éva Nagy, a 40-year-old mother of four, was shot dead in Nagycsécs, a village in northeastern Hungary. Attackers first set the family's house on fire with petrol bombs. As the family fled, they were fired on with shotguns. Éva and her brother-in-law were killed. Tibor was severely wounded. Only the daughter, who is deaf and cannot speak, was miraculously unharmed. "They didn't just kill our mother; they also destroyed our lives," Krisztina says in a trembling voice. "And just because we are gypsies."

On that same night, Nagycsécs was just the first place to be afflicted by a series of gruesome murders directed at Roma, which make up about 7 percent of a population of 10 million and the country's largest minority. In 2008 and 2009, right-wing extremist terrorists in Hungary killed six Roma, including a 4-year-old boy, and wounded 55 people, almost all of them Roma. Some of the wounds were life-threatening. These were followed by a long series of botched investigations, and Hungarian authorities only arrested the suspects in August 2009.

Today, after a trial lasting two-and-a-half years, the first verdicts in the so-called "Roma murders" were handed down by a court of first instance. Three of the accused -- Zsolt Petö and the brothers Arpad and Istvan Kiss -- were sentenced to life in prison. According to a new amendment to Hungary's penal code, they must remain "actually life-long" in prison, rather than being eligible for parole. The sentence has yet to become legally binding, and their lawyers have already said they would file appeals. The fourth defendant, Istvan Csontos, received a 13-year sentence without the option of parole for driving the get-away car used in two of the murders.

"The sentences are very severe, and that is fitting for the deeds," says Aladár Horváth, an activist for Roma rights who has been following the trial for years. "Unfortunately, they were imposed exclusively for murder prompted by base motives. In the indictment, it said that the murderers had planned to incite a civil war. They should have been charged with crimes against humanity and terrorism with the goal of genocide." Speaking with SPIEGEL ONLINE, Horváth also called the trial infrastructure "third-rate" and complained that the court had largely neglected to address the issues of the defendants' political motivations and the shared culpability of the authorities as a result of their botched investigations.

'The Complete Truth Has Not Been Uncovered'

In the last few years, the trial has garnered only scant public attention and only been consistently covered by a few media outlets. Nevertheless, a large crowd of people gathered outside the courthouse in Zugló, a central district of Budapest, on Tuesday to await the reading of the verdict. In addition to many journalists, there were also attack victims, relatives of the murder victims, Roma activists and right-wing extremists who sympathized with the defendants. There was also some occasional scuffling between the two sides as they crammed into the small and completely overflowing courtroom.

The accused maintained stony faces as the verdict was read out. After Laszloe Miszori, the presiding judge, detailed the rationale behind the verdict, the convicted brothers Arpad and Istvan Kiss were granted their wish to leave the courtroom.

After the verdict was publicized, a prominent member of the right-wing government of Prime Minister Viktor Orbán commented on the trial and the verdict. In a written statement, Human Resources Minister Zoltan Balog, who is responsible for Roma inclusion, said that he hoped the appeals court would confirm the verdict against the accused. "While accepting the fact that we must recognize that the complete truth has not been uncovered," Balog wrote, "this sentence strengthens my belief that no perpetrators of racist crimes can escape the law in Hungary, and especially savage murderers pay a worthy penalty for their deeds." He also added that "this is not a question of minority or majority; this is a question of human dignity."

Balog's statement marks the first time that a member of Hungary's government has made such a concession regarding official failings in the investigations since the murder series started in 2008. At that time, the government was made up a socialist-liberal coalition that was responsible for many of the shortcomings.

Parallels with the NSU Murder Spree

Indeed, there are many parallels between this murder spree and the one carried out in Germany by members of the neo-Nazi terrorist cell known as the National Socialist Underground (NSU). The right-wing extremist trio made up of Uwe Mundlos, Uwe Böhnhardt and Beate Zschäpe are believed to have killed 10 people, mostly men of Turkish origin, during a killing spree across Germany between 2000 and 2006 in addition to carrying out a number of bombing attacks.

Despite several potentially crucial leads provided by informants, disjointed intelligence organizations at the state and federal level neglected to follow up on them or share information among agencies, believing instead that the crimes were related to underground criminal organizations. Crucial files have also been destroyed.

The truth only emerged in November 2011, when Mundlos and Böhnhardt committed suicide after a botched robbery attempt and Zschäpe, who is currently on trial in Munich, set her apartment on fire in what was presumably an effort to destroy evidence. Police would find at the apartment not only the suspected murder weapons, but also a video in which the three boasted of committing the murders.

In the case of the neo-Nazis in Hungary, two of the right-wing extremists involved in the murders had been under secret surveillance, but the monitoring had been stopped shortly before they went on their spree. The fourth defendant, Istvan Csonto, was an informant for the military intelligence service even during the period of the murders. And it wasn't until after several attacks had been made and the first two Roma were killed that the investigation was centralized.

What's more, traces of DNA prove that two more perpetrators were involved in a robbery of weapons and in one of the murders. These two unknown suspects remain at large, and officials are claiming that reasons of national security prevent them from disclosing whether investigations are being conducted on them.

This has prompted József Gulyás, a former liberal parliamentarian who sat on a parliamentary commission investigating the murders in 2009 and 2010, to accuse Hungarian authorities of serious shortcomings. "The investigations were slipshod on all levels, from the work at the crime scenes to collaboration (between groups of investigators)," Gulyás claims.

However, Gulyás says he doesn't believe there was a government conspiracy. "The authorities simply treated the Roma and their affairs as being of secondary importance," he says. "And now even the Orbán government would like to quickly get the whole thing behind it."

Tibor Nagy, whose wife was killed by shotgun fire as she fled their burning house in Nagycsécs, finds the harsh verdict against the perpetrators to be justified. "They deserve it," he says. "But it still doesn't help us." Sorrow has debilitated Tibor, and he only receives a monthly disability pension of about €90 ($120).

Even today, Tibor is still asking himself what type of people would commit such murders. He loved his wife very much, he says. And he hopes that he might one day be able to afford to give her a proper gravestone.