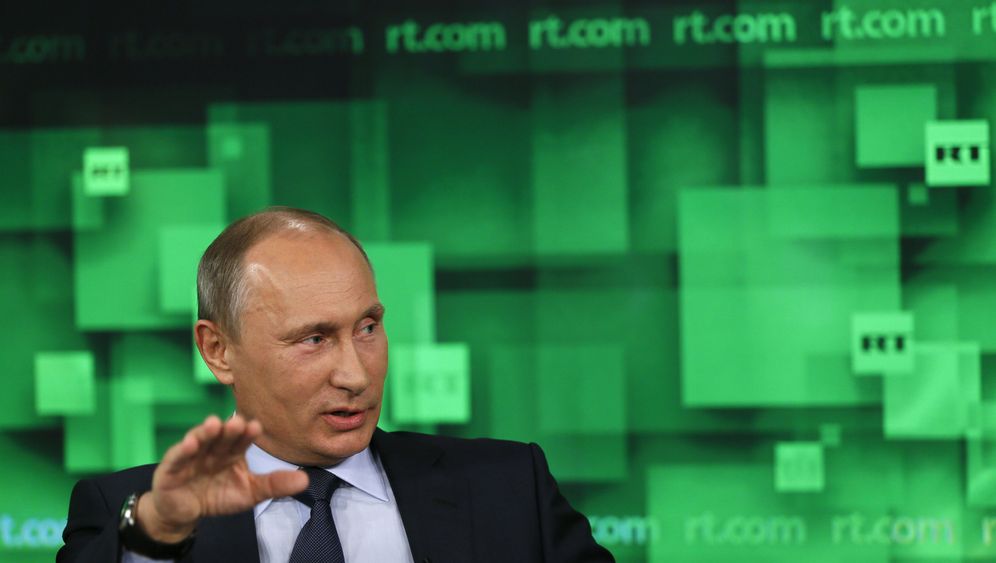 To supporters, Russian President Vladimir Putin is his country's savior. To his opponents, he's little more than a relentless tyrant. In the Wikileaks diplomatic cables, he is likened to cartoon superhero Batman; US business magazine Forbes has just chosen him as one of the most influential people on the planet. Yet there is one thing that pretty much no one has claimed before: That the ruler of the world's largest country (by land), with 143 million inhabitants, nuclear weapons and huge quantities of natural resources, is in reality a pathetic weakling.

But Moscow political scientist Stanislav Belkovsky, 42, has alleged exactly that in his new book, whose subtitle promises no less than "the whole truth about Putin." Russian publishers steered clear of the scandalous work, and Belkovsky has stood out for years, popping up again and again with his impudent and salacious claims about Putin. A not small number of people even believe that the reporter is given protection by high-ranking members of the Russian intelligence community.

Belkovsky, the star columnist at a Moscow tabloid, believes the key to understanding Putin lies in his unhappy childhood.

"The small Vladimir, who grew up practically without a father and without the love and care of his parents, was a withdrawn and grim child," the political scientist wrote. According to this version of events, Putin was born the son of an alcoholic two years before his official birth date. His mother had moved to Georgia with Vladimir, only for the child to be shunted off to what was then called Leningrad a short time later to the couple who would become the official parents of the future president.

Belkovsky is unable to provide proof, such as extracts from the registry of births, to back this up. Instead, he talks darkly about the mysterious death of a well-known investigative journalist who had been trying to unravel the mystery surrounding Putin's birth before he was killed in a private jet crash. According to Belkovsky, Putin has spent his entire adult life in search of a surrogate family. In Boris Yeltsin, he saw a surrogate father and in the oligarch and football club owner Roman Abramovich, an orphan, he saw a surrogate brother.

Further, Belkovsky writes, Putin was a deeply lonely politician who almost had to be forced into the presidency, was pressured to take decisions and who preferred to spend his free time with animals out of a fear of people. The many macho photos which show Putin flying with snow cranes or posing with tigers he supposedly anaesthetized himself are not part of a cynical PR campaign but rather grant a deep look into the soul of the president, he argues. "Therein lies the real Putin. He flees from people and his obligations to nature," Belkovsky wrote. "Here we have Vladimir's best friends; the Labrador Conny and the Bulgarian shepherd dog Buffy, his only roommates in the presidential residence."

That is cheap pseudo-psychology. But Western intelligence agencies, diplomats and experts on Russia are interested in two parts of Belkovsky's theories in particular: Putin's supposed fabulous wealth and his sex life. According to Belkovsky, Putin's alleged affair with beautiful former gymnast and Olympic champion Alina Kabaeva was nothing more than an invention of his PR advisors. They painted a picture of Putin as "macho and (a) sex bomb" in order to conceal, as Belkovsky speculates, that for him "sex and a sex life are alien" or even that he is "latently gay."

Belkovsky himself seems to be aware he is skating on thin ice with his speculation over the Kremlin chief's possible homosexual proclivities, he writes, "for the lawyers among my readers," it should be noted that "a cult figure among homosexuals is not automatically a homosexual himself."

Belkovsky also dedicates numerous pages to the private lives of Putin's two daughters, Mariya, 28, and 27-year-old Ekaterina, who the president has always tried to protect from the public eye. Mariya was romantically involved with a Dutch architect. When he was forced into a ditch by the armored motorcade of a Moscow banker, it took only 15 minutes for the culprits to be arrested. The commander of this lightning-speed operation was later appointed interior minister by Putin, while the banker, who was immediately sentenced to seven years in prison, now "has adequate opportunity to reflect on the quiet Dutch architect," Belkovsky wrote.

Luxury Villa on the Black Sea

Putin's second daughter, Yekaterina, lives together with the son of Nikolai Shamalov, a longtime friend of Putin. Shamalov is known in German-Russian business circles as mediating large deals between the Russian authorities and the West, earning his money making deals in the medical industry.

At the end of 2010, one of Shamalov's business partners claimed in an open letter to the then-President Dmitriy Medvedev that not far from the city of Sochi, where the Winter Olympics are due to take place next year, a palace costing hundreds of millions of euros was being built "for the private use of Putin." It was alleged that Shamalov financed the construction as a kind of trustee for Putin. Putin's spokesman responded promptly, saying the Russian president had nothing to do with the magnificent building on the Black Sea. Belkovsky now claims that the palace was intended for Putin's daughter Ekaterina and her husband, Shamalov's son. Shamalov has said that his company does not comment on private matters.

Fiction and truth are never far apart in Belkovsky's book. When he writes of rumors that Putin was seriously ill at the turn of the century, he states that drunken members of the president's bodyguard backed up the theory. They supposedly told Belkovsky that the president is occasionally replaced by body doubles to "hide his chronic illnesses and his health problems."

Belkovsky weathered the storm following his interview with the German newspaper Die Welt in 2007 in which he accused Putin of benefitting from corporate investments worth billions of dollars.

It is not the truth about Putin himself which Belkovsky's book reveals, but rather the Putin system: Information and disinformation merge seamlessly into each other. The assurances of those in power have not held sway over a suspicious populace for a long time now. That is why conspiracy theories flourish, and that is why Russians consider almost anything possible no matter how insane it seems. Belkovsky can be considered to be either a little crazy or a business-minded manipulator whose "utterances are always well paid for by someone in advance," as another political scientist put it.