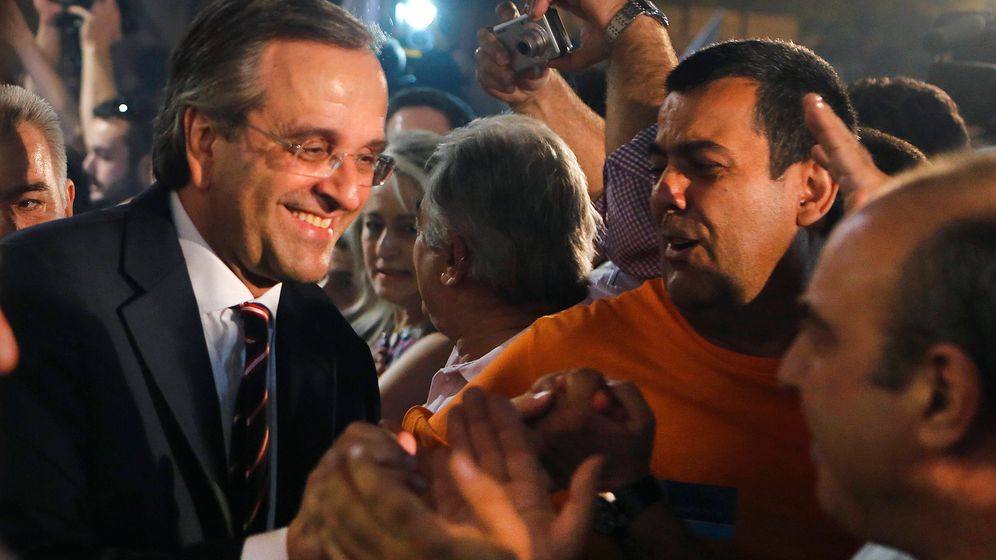 The world had been watching Sunday's elections in Greece with bated breath, worried that the outcome could precipitate a Greek exit from the euro zone. Now it looks as if the two mainstream parties that support the bailout deal with the European Union and International Monetary Fund (IMF) may be able to form a government -- but Athens isn't out of the woods yet.

According to official results from the Greek Interior Ministry, conservative New Democracy came first with 29.7 percent of the vote, giving it 129 seats, followed by the left-wing Syriza party with 26.9 percent (71 seats). The center-left Socialists (PASOK) came third with 12.3 percent (33 seats).

The far-right Golden Dawn party received 6.9 percent of the vote, giving it 18 seats in parliament.

The party that finishes first gets a 50-seat bonus, meaning that New Democracy and the Socialists have 162 seats in the 300-seat Greek parliament between them. They could form a coalition government which would back the EU-IMF bailout.

New Democracy leader Antonis Samaras called for broad support for a "national salvation government," saying "there is no time to waste." The new government "must bring economic growth and reassure Greeks the worst is over," he said.

'Path Will Be Neither Short Nor Easy'

EU leaders reacted to the result with relief. German Chancellor Angela Merkel's office said she had congratulated Samaras by telephone on Sunday night and said that Merkel assumes Greece "will keep to its European commitments."

German Finance Minister Wolfgang Schäuble called the result "a decision by Greek voters to forge ahead with the implementation of far-reaching economic and fiscal reforms. This path will be neither short nor easy but is necessary and will give the Greek people the prospect of a better future."

Speaking to German television on Monday morning, German Deputy Finance Minister Steffen Kampeter said Germany expected the new Greek government to honor its existing commitments but said Athens should not be pushed too hard. "It is clear to us that Greece should not be over-strained," Kampeter said.

"We want Greece to stay in the euro, we want Greece to continue wanting to belong to Europe," said German Foreign Minister Guido Westerwelle, speaking before the final results were announced. He stressed that Greece had to decide on its future, saying: "You cannot stop anyone who wants to go." He insisted that there could not be "substantial changes" to the agreement with the EU and IMF, but that he could "well imagine talking again about timelines." Last week, there were media reports that the EU might relax the terms of the agreement should pro-bailout parties be able to form a government.

The Euro Group of euro-zone finance ministers said in a statement that "continued fiscal and structural reforms are Greece's best guarantee to overcome the current economic and social challenges and for a more prosperous future of Greece in the euro area," adding that it "reiterates its commitment to assist Greece."

"The Greek people have spoken," said European Commission President Jose Manuel Barroso and European Council President Herman Van Rompuy in a statement. "We fully respect its democratic choice. We are hopeful that the election results will allow a government to be formed quickly." They said they would "continue to stand by Greece as a member of the EU family and of the euro area."

Government May Be Weak

Syriza had threatened to pull out of the deal with Greece's creditors if elected, a step that could lead to Greece being forced to exit the euro zone, with unforeseeable -- but presumably disastrous -- consequences for the rest of the currency union. If Athens were to fail to stick to the terms of the bailout deal with the EU and IMF, it could face default within months, making a return to the drachma practically inevitable. Worried Greeks had been withdrawing hundreds of millions of euros from their bank accounts in the days before the election, amid fears of their savings being wiped out.

Observers believe, however, that even if New Democracy and the Socialists manage to form a government, it may still be weak and could seek to renegotiate the terms of the bailout. Alexis Tsipras, leader of Syriza, said his party would continue to fight the bailout. "Very soon, the left will be in power," he told supporters in Athens on Sunday night. "We begin the fight again tomorrow."

Sunday's vote, which had been cast as a referendum on Greece's membership of the euro, was the second Greek election in six weeks. None of the parties were able to form a viable government after the inconclusive May 6 vote, where angry voters punished the two mainstream parties, leading to a second election being called. New negotiations to form a coalition government are expected to start on Monday.