Austria's two major parties, the center-left Social Democrats (SPÖ) and the center-right People's Party (ÖVP), will re-forge an unpopular grand coalition despite the fact that bickering between the two parties led to tumultuous early elections in September. 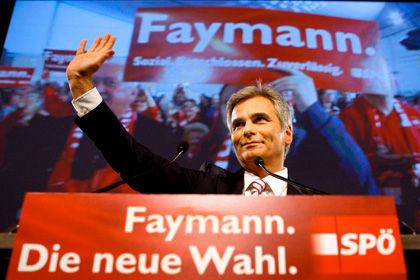 On Sunday, after almost two months of talks, the main parties made a sudden announcement that they had formed a government. The new coalition agreement will put the two party heads -- Social Democrat Werner Faymann and Josef Pröll of the People's Party -- in the chancellor and vice-chancellor seats, respectively.

The deal sees the departure of Social Democratic Chancellor Alfred Gusenbauer, who was the unpopular face of a fractious grand coalition government that collapsed in July after only 18 months.

Some observers think the new government will be stronger, partly because the looming financial crisis has forced the parties to settle their differences.

Austria has been in limbo since snap elections on Sept. 28 produced no clear winner. Two far-right parties saw a sharp rise in support among voters, raising fears of a right-wing coalition that would bring fringe politicians back to Vienna. But the sudden death in October of Jörg Haider, Austria's most famous and charismatic rightist leader -- and a resulting scandal over his alleged boyfriend -- derailed the far right's momentum.