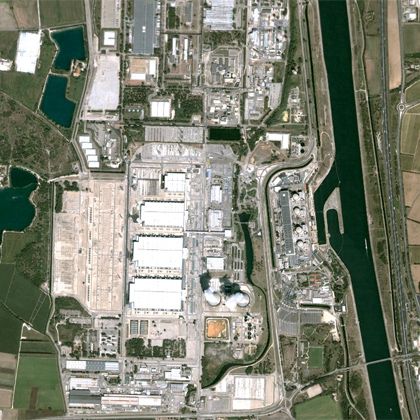 Radiation detected near France's Tricastin nuclear plant might be from older nuclear waste on its grounds rather than from the recent mishap.

After tests following a uranium leak in Francerevealed that the radiation came from another earlier source, France's environment minister has ordered tests of the groundwater in areas surrounding all of France's nuclear power plants.

The leak was first reported last Tuesday at the Tricastin plant in southwestern France. A tank containing a solution with traces of non-enriched uranium was reportedly being cleaned the evening of July 7, and the reservoir collecting it overflowed, allowing 30,000 liters (7,925 gallons) of solution to seep into the ground and two nearby rivers. Local authorities immediately banned using ground or river water for drinking or irrigation as well as swimming or fishing in the waters.

At the time, France's nuclear safety agency (ASN) claimed that the "risk was slight." On Friday, however, while conducting tests on the extent of radioactive exposure resulting from the leak, the Institute for Radioprotection and Nuclear Safety (IRSN) -- which is responsible for safety inspections of France's nuclear facilities -- announced that it had discovered traces of uranium in the water that pre-dated the recent leak.

In October 1998, the French Atomic Energy Commission (CEA) reported that uranium had been secretly stored on the facility grounds since the 1970s in a mound of dirt six meters (20 foot) high containing nuclear waste with uranium from military stockpiles. Experts had warned years ago that rainwater could wash uranium out of the pile and into the ground.

Following the revelation, French anti-nuclear umbrella group Sortir du nucleaire, or Abandon Nuclear Power, wrote a letter to Environment Minister Jean-Louis Borloo demanding a comprehensive examination of France's nuclear industry and claiming that other accidents have been kept secret "so as to not damage the reputation of nuclear energy."

In response, Borloo has now ordered a special committee to review the mishap and for groundwater in the areas surrounding all French atomic plants to be tested, according to an interview published Thursday in Le Parisien. Borloo also criticized Areva, the French nuclear giant that operates the Tricastin facility through its Socatri subsidiary, for its handling of the incident as well as unsatisfactory operational and safety procedures.

"I've been told that everything is under control," Borloo told the paper. "I intend to make sure."

Borloo's actions are good news for environmental groups. "Maybe it's the beginning of the truth," Sortir du nucleaire spokesperson Stephane Lhomme told SPIEGEL ONLINE. "But it's not enough."

Lhomme said his organization doesn't think Borloo's response goes far enough for three reasons. First, Lhomme laments that tests will only be conducted on groundwater and that possible gas emissions will be ignored.

Lhomme also criticized the proposed measures for only planning tests at nuclear plants with reactors rather than at all nuclear-related facilities. "As far as we can tell, it seems that the problems might be more at facilities than just plants," Lhomme said. "The plants are more capable of dealing with catastrophes."

As a state-run organization, Lhomme also said nuclear watchdog IRSN has a conflict of interest. "We want an independent group that we can trust doing the checking," Lhomme said. "We don't want the state to be telling everyone: 'Hey, everybody, there's no problem.'"

Instead, Sortir du nucleaire would prefer for the Commission for Independent Research and Information on Radioactivity (CRIIRAD) -- an independent French NGO founded in the wake of the Chernobyl disaster -- to conduct the tests. He noted that the group was not large enough to conduct all the tests, however, and that it should be joined by other international independent organizations.

A Matter of Transparency

In a company statement, Areva CEO Anne Lauvergeon announced Wednesday that she would personally visit the Tricastin facility on Friday and meet with public officials there to discuss the matter. She also claimed that a full investigation of what caused the accident would be carried out and that those responsible for the accident would be brought to account. "The incident has  stirred up emotions and warrants the taking of sanctions against any potential failings," the statement said.

Lhomme, on the other hand, is upset that his organization will not be invited to participate in the examinations or discussions. "If you are not for nuclear power in France," Lhomme laments, "then you are nothing. We are given absolutely no rights to see what's happening inside nuclear plants."

The Tricastin nuclear site is one of 59 nuclear plants in France, which together supply nearly 80 percent of the country's electricity. French President Nicolas Sarkozy is a strong backer of nuclear energy. His government is cooperating with a number of other nations in building nuclear facilities, and his government decided in May to establish a state agency to export French nuclear technology.