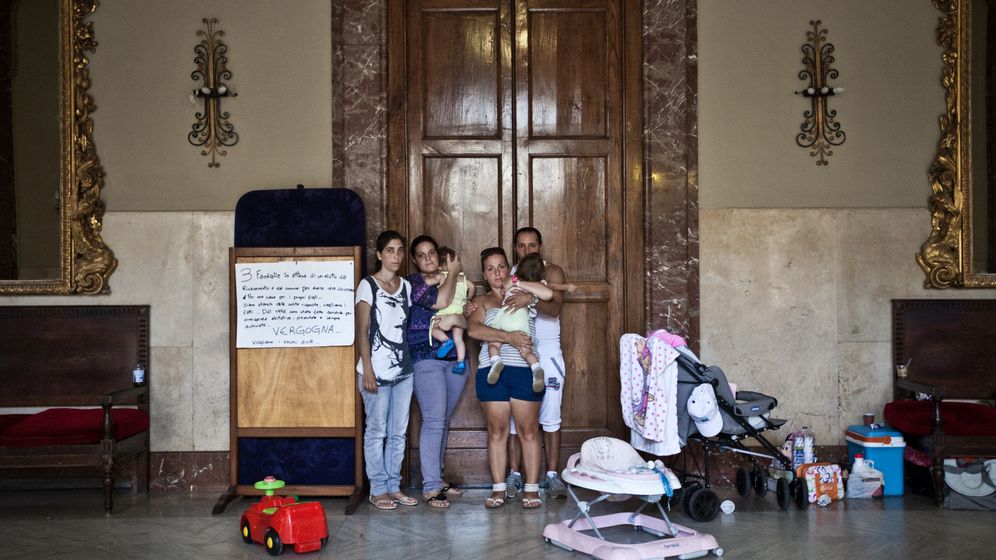 Photo Gallery: The Mayor of Messina Versus the Mob

Men with coarse features and shaved heads are pulling a heavy cart through the streets of Messina. The men, barefoot with tattoos on their upper arms, are sweating as they shout, again and again: "Viva Maria!"

By tradition, the men who carry the Madonna are dockworkers, ex-convicts and henchmen with the Sicilian Mafia, and these men look the part. They hope for redemption from the Virgin Mother for crimes ranging from extortion to drug dealing and murder. Along the side of the road, law-abiding bystanders hand their small children up onto the cart to be blessed.

La Vara, or the procession of the Madonna, is Sicily's most important festival. It's been celebrated for about 500 years, complete with fireworks and sweet cannoli. La Vara is also seen as an arena for local bigwigs to show off their clout. On the day of the festival, those who are in charge here, the church and the Mafia, are always in the front rows. But everything is different this year. This year, the new mayor pulls the cart, with the help of a prominent Mafioso, but the mayor doesn't kiss the mobster's hand. Instead, he jumps onto the cart, setting off a ripple of whispers below, because this is something a mayor has never dared to do. Then they begin to shout, again and again, "Renato! Renato!"

Mayor Renato Accorinti often walks around barefoot, and the day of the festival is no exception. He is wearing a T-shirt from Addio Pizzo, an anti-Mafia movement, imprinted with the words: "A people that pays no protection money is a free people." At last year's procession, Addio Pizzo activists handed out flyers against the Sicilian Cosa Nostra and the Calabrian 'Ndrangheta and were chased away.

Now the mayor jumps from the cart onto the stage in front of the cathedral and says, in a soft voice: "This is a public festival, and I'm a man of the people. A future is possible in Messina! We can only be strong together!" There are several minutes of applause.

A New Kind of Politician

Accorinti has been mayor of the city of about 250,000, on the Strait of Messina, since June 24. He is a physical education teacher, not a party politician, and he campaigned as part of a citizens' movement called "Let us change Messina from the bottom up." Anyone who accompanies him is astonished by his stamina, and by the southern Italians' newfound enthusiasm for politics.

Accorinti takes only a few steps before a crowd has formed around him. "For us, you are a second Pope Francis," they say, addressing him in the familiar form, and showering him with hugs and kisses. Accorinti returns the sentiment by hugging, kissing and addressing them all in the familiar form. His election came unexpectedly. He was an accidental mayor, a sensation for Sicily. The island on the outermost edge of Europe is Italy's poorest region -- corrupt, clannish and a sinkhole for millions in European Union subsidies.

Most of all, however, the election is a sensation for Messina, a city where for decades municipal politics was essentially a vehicle for personal enrichment. The wives of Accorinti's two predecessors were arrested in July for embezzling government funds. The city has a budget shortfall of €600 million ($812 million). While the Mafia is in control in Palermo and Reggio Calabria, Messina is traditionally the place where it catches its breath and plans its next move.

Accorinti is an example of how, in a country that was run into the ground for decades by former Prime Minister Silvio Berlusconi, someone can govern without scandal, pomp or grand gestures. He is a local hero, unlike the combative partisan politicians who currently make up a very shaky government in Rome.

Accorinti is a bachelor who lives with his mother, a sufferer of dementia, in the working-class apartment where he was born 59 years ago. Until winning the election, he was a movimentalista, or political activist. He spent 40 years fighting for bike paths and human rights, and against the privatization of the water supply.

On the day of his election, Accorinti was standing in a gymnasium. His supporters lifted him up above their heads, and then he took off his shoes and, surrounded by thousands of people, ran to the city hall. He was all too familiar with the building, from his days submitting petitions and letters of protest, as well as engaging in hunger strikes. For decades, he was repeatedly thrown out of the building by the authorities. "Now I have the tools to make changes, but not the power," he says today. "Politics is nothing more than a service." His first official act was to have the electric turnstiles in the lobby removed, "so that anyone can come in, at any time."

It's a Monday morning, and Accorinti's three waiting rooms are full. Sitting on the red velvet sofas are men without work, homeless people and a family that lives in a shantytown. They've brought along food and squeaky tricycles for their children, who are causing pandemonium.

"Welcome to the Third World," says the doorman. It is shortly after nine, and the chaotic scene is perfectly normal in a country where the government has hardly any presence, where there is no welfare, little in the way of unemployment benefits, and only the vague hope that the boss, the godfather or perhaps the mayor will do something for these people.

"Give me a few hours," Accorinti tells the family from the shantytown, "I'll look into it." It's a phrase he uses a lot. Then he asks his secretary whether he can make a phone call. The secretary asks him when he will get used to the fact that he is now the boss and can do as he pleases.

He puts on the obligatory jacket for his first city council meeting in the afternoon. He hates these meetings, under chandeliers and baroque frescoes, at which the council members use grand gestures to berate, blackmail and intimidate each other. He would rather be working with the people, looking for solutions to their problems.

When he came into office, Accorinti ordered a cleanup of the local beach and city parks -- with the help of city employees unaccustomed to getting their hands dirty. His biggest achievement to date was the appointment of a professional and efficient city council. His pièce de resistance is the fight against the new Messina bridge.

The plans call for what would be the world's largest suspension bridge, an earthquake-proof structure spanning the Strait of Messina, about three kilometers (1.9 miles) wide -- a project that would cost billions of euros. It was the Berlusconi government's prestige project, and it is an example of both Italy's inventive spirit and its hubris. But it was never a project that made sense. Yet four or five years ago, there were many indications that the bridge would be built.

That was until Accorinti showed up and, in the summer of 2002, climbed to the top of a transmission tower, to the spot where the bridge piers would be standing one day. At a height of 220 meters (722 feet), he unfurled banners that read "No to the bridge!" The photos that a friend took from a helicopter quickly made headlines around the world.

In Messina, he went from door to door and explained his opposition to the project to people. Many were in favor of the bridge, which they hoped would provide jobs. They also wanted to be connected to a country that takes care of them. Accorinti told them about the likely environmental damage, the true costs of the project and the Mafia, which stood to profit from the construction contracts and the removal of construction dirt. At the moment, it seems unlikely that the bridge will be built. Instead, Accorinti wants to create an economically viable ferry connection between Messina and Reggio, operated by the city. He will make new enemies with the project, because a powerful shipping company owns the current ferries.

The family that was sitting in his waiting room at city hall lives only a few blocks from the mayor's apartment. He pays them a visit, as promised. They are the fifth generation of a family that has been living in the shantytown since the 1908 earthquake, which claimed about 100,000 lives. Now they are standing there in their mirrored sunglasses, surrounded by corrugated sheet metal and debris, with their hands on their hips. They are now loud and demanding, telling Accorinti that they want him to get them a house, immediately. But he remains hard-nosed. He doesn't want them to ask him for favors. Instead, he wants these people to come up with their own ideas on how to improve their lives.

Later on the same day, he will complain that everyone wants his attention. He works 12 to 14 hours a day and sleeps only two to three hours. How long can he keep this up?

For years, a town south of Naples also had a mayor who was a political outsider, a fisherman who wanted to save a national park and made tossing cigarette butts onto the street a punishable offence. Then members of the Neapolitan crime syndicate Camorra shot him to death in his Audi. If he continues like this, say his friends, Renato will soon be dead. But it won't be at the hands of the Mafia, which wouldn't dare hurt him. It'll be a heart attack, the friends say.

On the evening after the procession of the Madonna, Accorinti is sitting in a pub when he is joined by some of his former students. They remind him of the time he told them why it's important to rebel against the Mafia, and how he took them to visit the families of Mafia victims and the wreck of the car bomb attack on Judge Giovanni Falcone.

"Will it be possible to make Messina into a better city?" the students ask. "It will be possible to believe in it," says Accorinti. And after that? He could travel to India, or he could become a teacher again. It doesn't matter what he does, because he has already changed Messina forever.