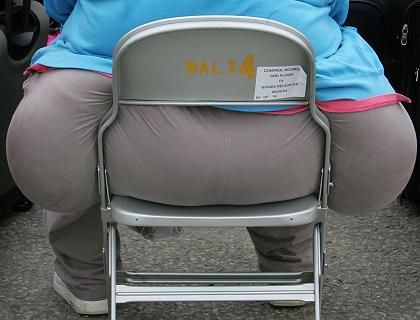 Will it hold? A passenger at London's Heathrow airport.

Germans are the fattest people in Europe according to an international study, but Britain and Greece have a higher proportion of clinically obese people.

The study by the International Association for the Study of Obesity found that in Germany 75.4 percent of men and 58.9 percent of women are overweight, far higher than levels in Italy and France.

The organization classifies people as overweight if their Body Mass Index is greater than 25. The index is arrived at by dividing one's weight in kilos by the squared height in meters. For example a man who weighs 75 kilos and is 1.8 meters tall has a BMI of 23.15 (75: 1.80² = 23.15).

But Germany is behind the Greeks, British and some Eastern European countries when it comes to obesity, classified as a BMI above 30.

Vojtech Hainer, president of IASO's European section, said Germans had not yet reached US levels of obesity. "Of all industrial states the US is the country with the highest proportion of obese people," he told SPIEGEL ONLINE.

Berthold Koletzko, food expert at Munich University, said there was a correlation between overweight and beer consumption. "Germans and the Czechs are the biggest beer drinkers, " he told Süddeutsche Zeitung newspaper. Both countries are at or near the top of Europe's fatness ranking.

Obesity is regarded as one of the biggest health risks in developed countries. Obesity-related diseases include diabetes and heart problems.